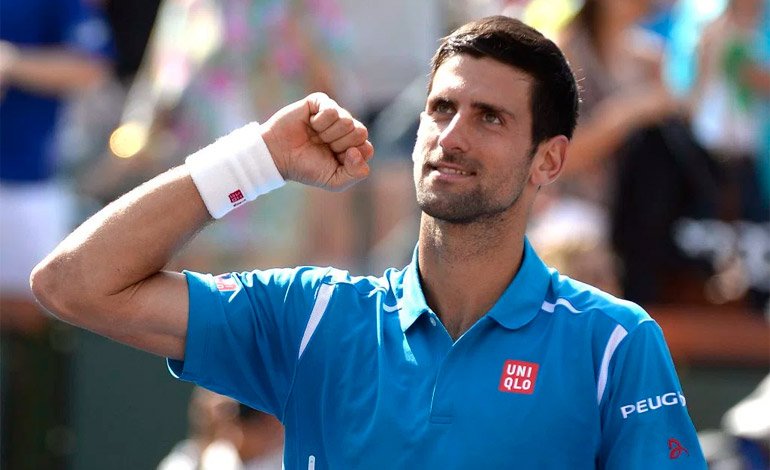 Serbian Novak Djokovic overcame physical fatigue and intense heat to win today 7-6 (5) and 6-3 against Belgian David Goffin, who wasted the serious options he had to beat the world number one and thus avoid being qualify for their third consecutive final in Miami.
The world number one will seek his sixth title at the Miami Masters 1,000 against the winner of the other semi-final, which will be played in the afternoon session by sixth-seeded Japanese Kei Nishikori and Australian Nick Kyrgios (24).
In the first set, Djokovic began to show signs of physical fatigue, but his defensive and counterattack capacity served him well against an aspirant who tried with greater interest, with 18 winning shots, by 8 of the Serbian (27-21 in the total of the match), but the pressure and luck of the champion deprived him of being ahead on the scoreboard.
If the harshness due to the heat of the first set, which was more than 1 hour and 10 minutes, took its toll on Belgrade in the second, he suffered until a discussion with the chair umpire midway through the set turned him on and he recovered the energy that it was missing until that moment.
And it is that the first Belgian to reach the semifinals in the 32-year history of the American tournament presented a tough battle to prevent the world’s one from reaching the final and aspiring to his third consecutive title in Miami.
Goffin thus lost his second semi-final followed by a Masters 1,000 after falling in the penultimate round of Indian Wells to Canadian Milos Raonic two weeks ago.
But it was not easy at all against Belgrade, who had already defeated him in their three previous matches, the last of them at the 2015 Cincinnati Open (USA) 6-4, 2-6, 6- 3.
The Serbian, who has already won this year in Doha, the Australian Open and in Indian Wells, started with some doubts in the serve and with five less winners than the Belgian for the same unforced errors.
This was followed by four breaks for Goffin, who broke the game in the seventh game, but immediately Djokovic showed his mental strength to equalize 4-4 after a counterbreak.
Then Djokovic began to suffer from the strong heat and high humidity one more day at the Crandon Park Tennis Center, but even so he kept his serve and was only one game away from taking the first set, but the 15th ATP equalized to 5.
With a Djokovic far from dominating as usual, he was 0-30, but the Liege’s anxiety got the better of him and did not take advantage of the moment, and the Serbian took the next four points to force at least the tie break.
In the tiebreaker game, the pressure of a tie break and having number one in front of him pushed the Belgian to failure, which left two set points for Djokovic, who required the second to win the first set, with the luck of the champion, yes, in a ball that after hitting the net fell on the side of Goffin.
The fatigue was more and more evident in the Serbian, but he solved his first serve in the second set with three aces that gave him a break, but in the second, with 1-2 in the light, Goffin had a break ball, but the Liege man again let the Serbian escape.
The 15th of the ATP gave an image of being cooler than his rival, but was unable to take advantage of the weakness of Djokovic, who as soon as his physical tone increased somewhat he broke the Belgian and went 4-3 and serve.
The cause of this improvement can be attributed to a warning for excess time to serve as indicated by the chair umpire, which angered the Serbian by considering this measure unfair, since the delay was caused by a bad movement with one of his feet, that ended up in pain.
That adrenaline gave Djokovic the energy he needed and, then yes, winning his twenty-seventh game of the year, in which he has just lost one and it was due to physical discomfort.