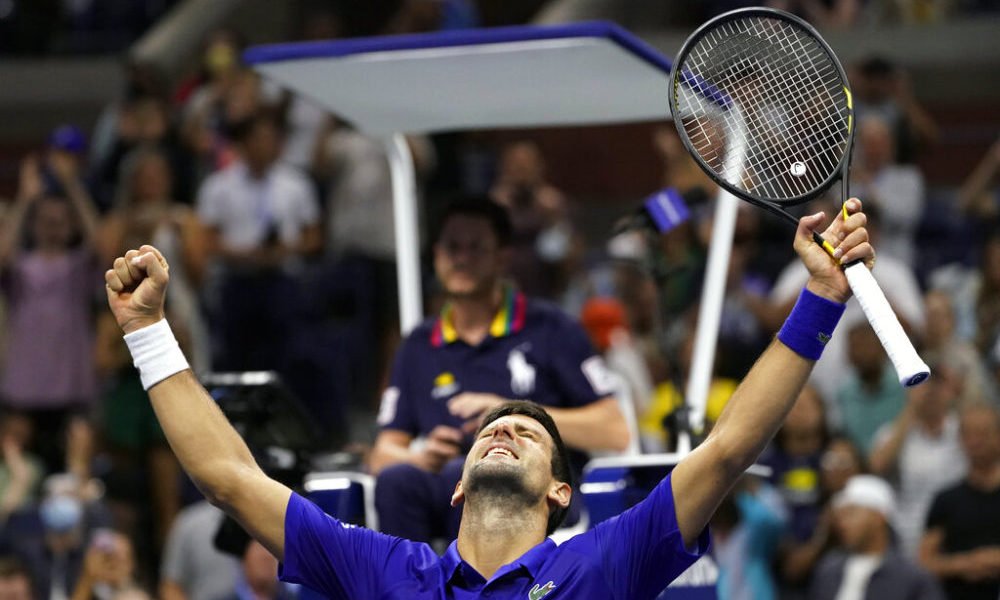 Not in need of his best version, Serbian Novak Djokovic beat young American Jenson Brooksby on Monday to reach the quarterfinals of the US Open, placing himself three victories away from a historic title.
If he achieved his fourth crown in New York, Djokovic would conquer all four Grand Slam tournaments in the same season, a feat that no male tennis player has achieved in 52 years, and would overtake Roger Federer and Rafa Nadal in the race for the most number of big titles, with 21.
Monday’s day also saw the quarterfinals of Alexander Zverev and Belinda Bencic, brand-new winners of Olympic gold at the Tokyo 2020 Games, and 18-year-old British sensation Emma Raducanu.
But the most tense moment at Flushing Meadows came at the Djokovic crossover, when rookie Brooksby won the first set.
The world number one made use of his experience against the 20-year-old Californian and ended up winning by 1-6, 6-3, 6-2 and 6-2 in two hours and 58 minutes of play on the main court, Arthur Ashe.
The next rival of ‘Nole’ will be the Italian Matteo Berrettini, sixth seed, whom he beat in the final of last Wimbledon.
It’s going to be exciting. He loves the big stages. (He) has a great serve, a great game in general, ”said the Serbian about the clash with Berrettini, who on Monday defeated German Oscar Otte 6-4, 3-6, 6-3, 6-2.
With up to 41 unforced errors, Djokovic again showed vulnerabilities similar to those of Saturday against Kei Nishikori of Japan, who also won the first set.
Brooksby “played a perfect first set and I couldn’t do much. I was trying to find my rhythm and my place in the game, ”Djokovic acknowledged.
The American, number 99 in the ATP and who agreed to the US Open by invitation, also fought a battle in the second set starring in some of the best moments of the tournament, but finally succumbed to a Djokovic launched to write one of the greatest feats of this sport.

In his turn Alexander Zverev, runner-up at the last US Open, faced another of the great promises of the circuit, the Italian Jannik Sinner, whom he beat 6-4, 6-4 and 7-6 (9/7).
The fourth-seeded German in New York only had a few moments of trouble in the third set, when the tall Italian left glimpses of his talent.
Sinner, 20, had five set balls but the German solved them by relying on his devastating serve (17 ‘aces’ to 5 of his rival).
The world number four, after clasping the match in the ‘tiebreak’, revealed that he keeps the gold medal achieved in Tokyo-2020 very close.
“I hug her at night,” he said. “I don’t have a girlfriend, so the gold medal sleeps next to me (…) It’s a little reminder of what happened last month to give me some energy.”
Zverev thus continues on his way to his second straight final at Flushing Meadows, after his 2020 loss to Dominic Thiem in which he let slip a two-set lead.
The German will be seen in the quarters with South African Lloyd Harris, 46 in the world ranking, who came back in a set against to beat American Reilly Opelka 6-7 (8-6), 6-4, 6-1 and 6-3 .

You can also read:  Caroline Wozniacki stops Mónica Puig in the first round

– Bencic against the Raducanu phenomenon –

Belinda Bencic also maintained the momentum of her Olympic victory and defeated Iga Swiatek, seventh seeded, 7-6 (12/14), 6-3.
The 11th-seeded Swiss is still cruising in New York, where she has yet to give up a set.
Bencic will fight to return two years later to the US Open semifinals against the young Emma Raducanu, who continues to dazzle without conceding a single set at Flushing Meadows.
The British, number 150 in the world ranking, had no problems to beat the American Shelby Rogers 6-2 and 6-1, who had given the bell in the previous round by eliminating number one, Ashleigh Barty.
At 18 years old, Raducanu is one of the great sensations of this US Open along with other tennis players of the same age also in the quarterfinals such as the Spanish Carlos Alcaraz and the Canadian Leylah Fernandez.
For her part, Czech Karolina Pliskova beat Russian Anastasia Pavlyuchenkova 7-5 and 6-4.
Pliskova, world number four, will face in the quarterfinals the winner of the last meeting on Monday between the Canadian Bianca Andreescu, champion of the 2019 US Open, and the Greek Maria Sakkari. (AFP)

You can also read:  Serena remains firm in Miami