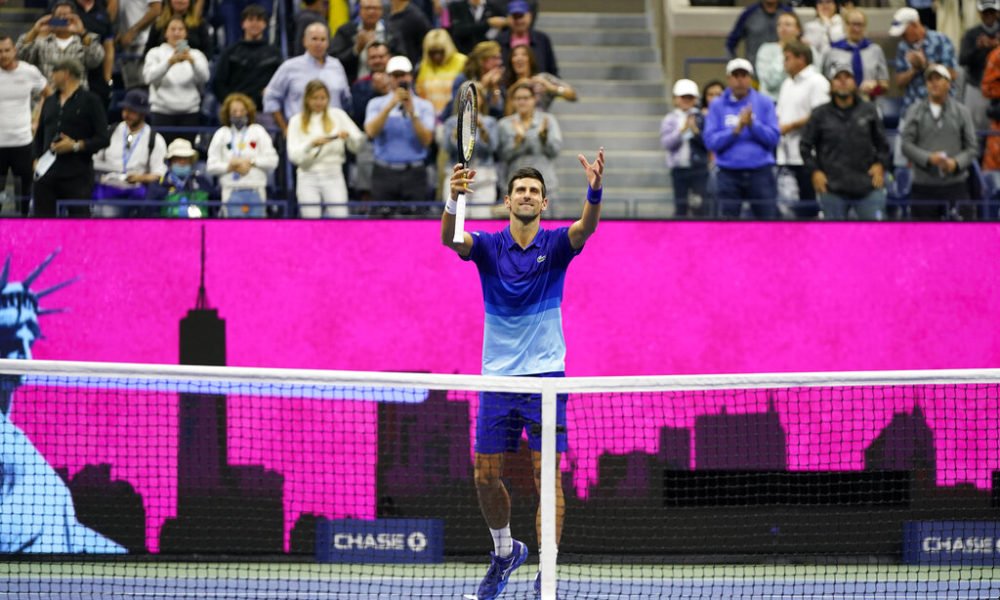 Serbian Novak Djokovic, world tennis number one, defeated Dutchman Tallon Griekspoor in the second round of the US Open and was five wins away from completing the feat of winning all Grand Slam tournaments in a year.
With New York and the Open still reeling from the impact of Wednesday’s storm, which caused at least 41 deaths, Djokovic delivered a solid performance against Griekspoor, number 121 on the ATP.
Djokovic got rid of the Dutchman 6-2, 6-3 and 6-2 in one hour and 39 minutes of play on center court Arthur Ashe.
The Serbian met in the third round with Japan’s Kei Nishikori, runner-up at the 2014 US Open, who defeated American Mackenzie McDonald.
Djokovic thus continues his firm step towards his fourth title at Flushing Meadows with which he would complete a full of Grand Slam triumphs in 2021, a feat that no male tennis player has achieved since Rod Laver in 1969.
Just being in the conversation with Rod Laver… it’s really an honor. I try to draw strength and energy from that, ”Djokovic acknowledged.
If crowned in New York, the Serbian would add his 21st Grand Slam title, leading his historic fight with Roger Federer and Rafael Nadal, both absent from the Open due to injuries.
The challenge is “probably more mentally and emotionally, physically I feel very good,” stressed Djokovic.
“It’s more about dealing with everything that is happening off the track, with all the expectations,” he acknowledged. “I try to take it moment by moment.”

You can also read:  Murray, number 1 of the ATP, will not be in the Masters 1000 of Montreal

One of the main threats for the Serbian is Alexander Zverev, who easily got rid of the Spanish Albert Ramos 6-1, 6-0 and 6-3 in just one hour and 14 minutes.
«It’s great to spend in three sets and just over an hour. I’m going to need this energy for the next matches, ”Zverev congratulated himself.
In July, the German thwarted Djokovic’s goal of also grabbing a victory at the Tokyo Olympics by beating him in the semifinals en route to his gold medal win.
Fourth seed in New York, Zverev on Thursday showed his spectacular form with which he aims to get revenge for his cruel defeat in the final of the last US Open against Dominic Thiem, in which he squandered a two-set lead.
At the end of the day, the young Canadian Denis Shapovalov, seventh seed, eliminated Spanish Roberto Carballés 7-6 (9/7), 6-3 and 6-0.

You can also read:  Osaka makes history by taking the top of the world rankings

In the women’s category, the Australian Ashleigh Barty, world number one, beat the promising Danish player Clara Tauson 6-1, 7-5.
The Australian, who is seeking the third Grand Slam title of her career and the second in a row after last Wimbledon, will face the American Shelby Rogers in the next round.
The Spanish delegation, meanwhile, had a bittersweet midday with the defeat of Paula Badosa against the Russian Gracheva by 6-4 and 6-4 and the victory of Sara Sorribes against the Taiwanese Su-Wei Hsieh by 6-1 and 6- 3.
Sorribes will now face young British sensation Emma Raducanu, who beat Chinese Shuai Zhang 6-2, 6-4.
In other results, the Canadian Bianca Andreescu, champion of the US Open in 2019, beat the American Lauren Davis 6-4 and 6-4 and the Polish Iga Swiatek, winner of Roland Garros in 2020, rallied a set against to defeat French Fiona Ferro 3-6, 7-6 (7/3) and 6-0.
In doubles, Colombians Robert Farah and Juan Sebastián Cabal were eliminated in their debut against Poles Hubert Hurkacz and Szymon Walkow in a game that had been suspended the day before due to rain.
Hurcakz and Walkow won 6-3, 6-7 (7/2) and 6-3 in a total of two hours and 13 minutes of play.

You can also read:  Muguruza: "I am surprised by the reaction of my body"

– Delay and review of damages –

The fourth day of the Open started with an hour delay due to the revision of the facilities after the rains and massive floods on Wednesday, remnants of Hurricane Ida.
“There were some fallen branches, but nothing that could affect the tournament or the fans,” explained the director of operations for the National Tennis Center, Danny Zausner.
The storms on Wednesday led to the cancellation of many games on the outdoor courts of the Open, which on Thursday received a smaller number of spectators.
The record-level rainfall even caused the transfer of the shock that Argentine Diego Schwartzman won against South African Kevin Anderson to center court due to the surreal burst of water on the Louis Armstrong indoor court.(AFP)