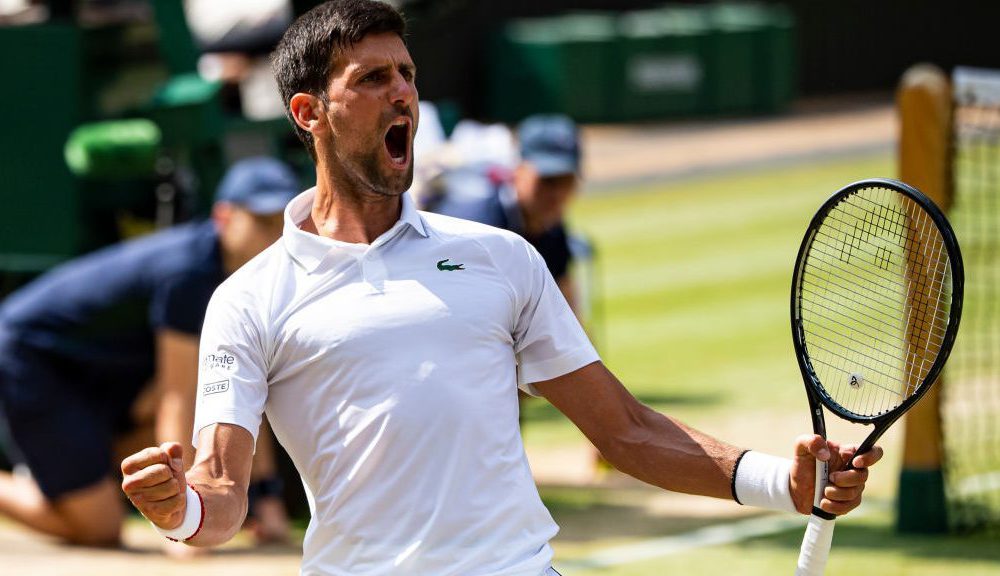 Wimbledon learned this Friday the identity of its two finalists in the men’s draw: Serbian world number one Novak Djokovic, who will seek on Sunday to equal the record of 20 Grand Slam titles held by Roger Federer and Rafa Nadal, and Italian Matteo Berrettini, ninth of the ATP ranking.
For Djokovic it is also a golden opportunity to win a sixth title at Wimbledon.
In the London tournament he chained a twentieth consecutive victory, after his titles in 2018 and 2019 -in 2020 it was not disputed due to the covid-19 pandemic-.
For Djokovic it is also his 20th game in a row winning in a Grand Slam tournament, after his titles this year at the Australian Open and Roland Garros.
«The score (with a victory in three sets) does not reflect the difficulty of the match. He (Shapovalov) lacked a bit of luck in the first set and was better for most of the second, ”the 34-year-old Serbian analyzed.
«I give everything, especially at this stage of a tournament like this. Giving up is never an option, “he said.
Shapovalov ended up leaving the court in tears of frustration, having battled in all three sets and had no fortune in the outcome of any of them.
In the ‘tie break’ of the first set, the Canadian’s ultra-offensive and risky tennis took its toll: three errors and a double fault on the set ball, to give the victory in the set to Djokovic.
In the next two they reached 5-5, before Djokovic managed to win from there on two Thursdays and take both sets 7-5.
– First Italian in the final –

In the first semifinal, the Italian Berrettini beat in four sets, 6-3, 6-0, 6-7 (3/7) and 6-4, the Polish Hubert Hurkacz (18th), who had been the executioner in the quarterfinals. from the Swiss Roger Federer.
Berrettini, 25, is the main exponent of the new wave of Italian tennis and the hope of his country in London, the same city where his soccer team will also play the final of the European Championship against England on Sunday.
“I had never dreamed of this, it was too big … But now that I’m living it, I have to believe it!”, Said Berrettini.
After winning the Queen’s tournament before Wimbledon, he will now be the first Italian to play the final of the only Grand Slam on grass.
Berrettini has surpassed his best performance in a Grand Slam at this Wimbledon, which was the semifinals of the 2019 United States Open.
In Wimbledon he participates for the third time and his best result so far was a round of 16 duel in 2019. He was then forcefully defeated (6-1, 6-2, 6-2) by Federer.
Hurkacz could not repeat his exploits from previous rounds on Friday, when he had eliminated Federer in the quarterfinals and the world number two, Russian Daniil Medvedev, in the round of 16.
Starting 2-3 in the first set, the Italian lined up 11 games to win the first set, the second, and go 1-0 up in the third.
Hurkacz managed to fight back in that third set, which he took in the tie break, but in the fourth set Berrettini controlled the situation and ended up taking the ticket to the final.
«I think I deserved to win the third set. But when I lost it, I told myself that it was not serious. That has been important ”, Berrettini estimated. (AFP)

You can also read:  Federer surpasses his debut to a combative Tiafoe and waits for Del Potro or Haase