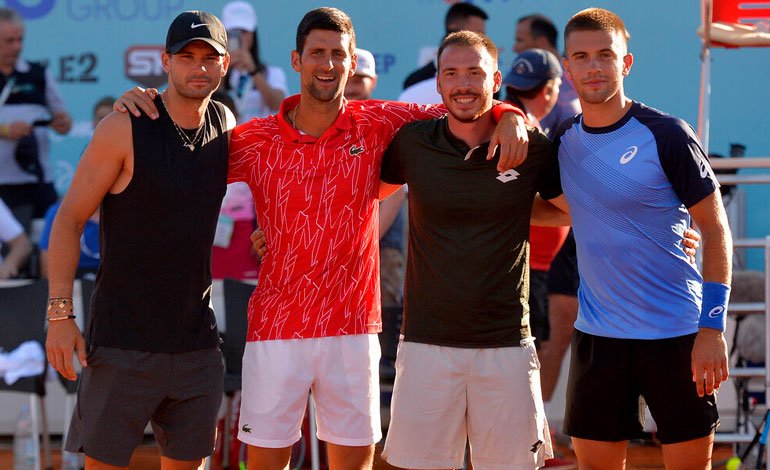 Novak Djokovic’s parents came to their son’s defense and blamed another player for spreading the coronavirus in a series of tennis exhibitions organized by the world’s number one tennis player.

Djokovic and his wife Jelena tested positive for the virus on Tuesday. The 17-time Grand Slam champion apologized on social media for setting up the Adria Tour, an exhibition tour that brought together tennis players from various countries to play matches in his native Serbia and Croatia.

Thousands of spectators attended the games, in which the social distancing measures were not followed.

True to his outspoken style, Djokovic’s father laid the blame for the tour cancellation on Grigor Dimitrov, one of three other players who have tested positive in recent days. There is no evidence that Dimitrov infected the others.

You can also read:  Federer regains fourth place in the ATP after winning in Miami

“How it happened? Because that man (Dimitrov) got sick, who knows where, ”Srdjan Djokovic told RTL, a television channel in Croatia. “The test was not done here, someone else did it elsewhere … I think that was not right.”

“It has caused great harm to Croatia, to us as a family in Serbia,” he added. “Nobody feels because of this situation.”

The contagions put into question whether professional tennis should return to activity soon, including the US Open to be played in August.

You can also read:  Murray married as a "skirt"

“We were wrong, it was too early,” wrote Djokovic, who had previously said that he would not get vaccinated for the virus even if it was made mandatory for travel.

Dimitrov played matches in both Belgrade and Zadar, a seaside resort on the Croatian Adriatic coast. According to press reports, he arrived in Serbia from the United States and his native Bulgaria. Dimitrov is recovering from the infection in Monaco and did not immediately respond to a query from The Associated Press.

NBA star Nikola Jokic, a Serb who plays for the Denver Nuggets, also tested positive for the coronavirus. He was photographed shaking hands with Djokovic at a basketball exhibition in Belgrade this month. Jokic recovers in Sombor’s hometown, according to press reports.

You can also read:  Djokovic sweeps Dzumhur in first round

Djokovic’s mother said both her son and Jelena feel fine, but suffer from the criticism they have received.

“What has been written is horrible, but we are used to it,” Dijana Djokovic told the Belgrade daily Blic.

The coronavirus outbreak led to the suspension of the ATP and WTA tours in March. Both tours last week announced their plans to resume tournaments in August.

The US Open is due to start on August 31 with no spectators. AP (HN)