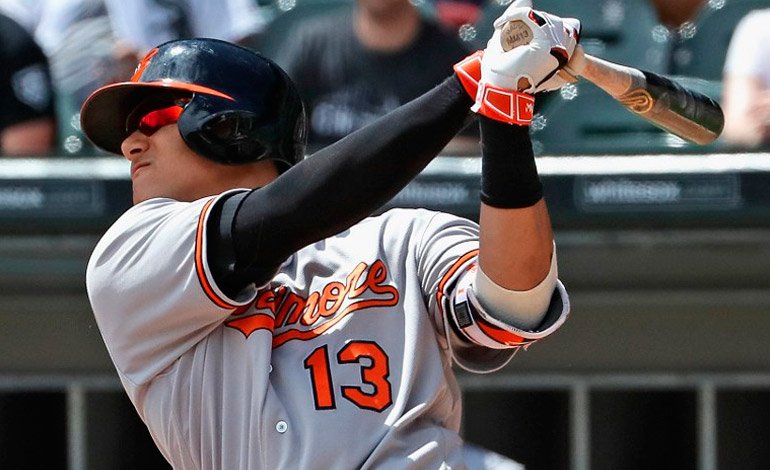 Dominican slugger Manny Machado, of the Baltimore Orioles, finished the last seven days at full speed with the wood by hitting three home runs on Sunday in the game that his team defeated the White Sox with a 10×2 blowout, to be considered the ‘Latin Player’ of the week.

Machado became the 14th player this season to accomplish the feat of three homers in one game.

The All-Star third baseman also became just the second player to hit three homers in the first three innings, as well as driving in seven of his nine RBIs for the week.

The Dominican hit a two-run homer in the first inning, another three in the second, both against starter James Shields, and the third in the third inning against reliever Matt Albers.

The only other player to accomplish that feat in the first three innings was Carl Reynolds with the White Sox against the Yankees on July 2, 1930.

The Orioles have the best record this season in dispatching balls to the fairways with a whopping 168.

Venezuelans Wilson Ramos, of the Washington Nationals, and Miguel Cabrera, of the Detroit Tigers, escorted Machado with a spectacular offensive week.

Others who sounded loud on that journey were the other plainsmen Yongervis Solarte (Padres) and Carlos ‘CarGo’ González, as well as the Puerto Rican-Cuban Nolan Arenado, the last two of the Colorado Rockies.

A Cuban trio made up of Kendrys Morales (Royals), Jorge Soler (Cubs) and Yasmany Tomás (Diamondbacks) also stood out with the wood.

You can also read:  Randy Arozarena made more money in the "World Series" than in the regular season

Arrieta (13-5) got a victory at the expense of the Athletics with eight solid shutout innings, in which he scattered only three hits with four strikeouts; González (7-9) outlasted the Giants with seven good innings, with one run and two hits allowed and seven strikeouts, and closer Chapman had three saves in the week by delighting fans with several pitches over 100 miles per hour. (AFP).