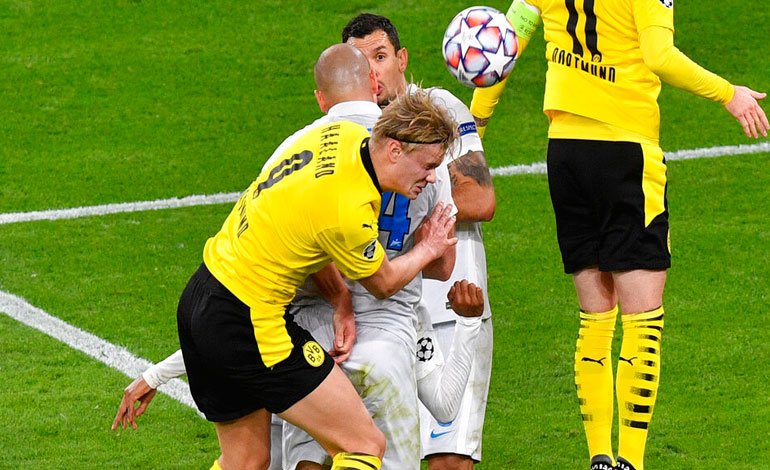 A penalty goal from Jadon Sancho in the 78th minute and another from Erling Haaland in the 91st minute gave Borussia Dortmund a hard-fought 2-0 victory against Zenit St. Petersburg, who for most of the game were completely dedicated to defensive work.

The game was marked by a sterile domain of Dortmund that had clear advantages in terms of possession of the ball but also many difficulties to reach the goal.

Dortmund’s first possession lasted more than a minute and a half without Zenit touching the ball. Five minutes into the game the statistics showed a ball possession of 90 percent.

However, the first shot on goal, a shot from Giovani Reyna inside the area slightly deflected, did not come until the 15th minute.

Zenit let Dortmund play up to about 30 meters from the goal but from there they mounted two lines of pressure against which the German team had difficulty finding solutions.

You can also read:  Messi and Neymar, equally influential but very different

In the center – where on several occasions he tried to reach by playing – there were no spaces. And the play on the wings was not only poor, but also lacked enough speed to disarm Zenit’s defence.

The second shot on goal came in the 25th minute, a free kick by Marco Reus that goalkeeper Mikhail Kerzakov deflected for a corner kick.

The first clear chances after Reyna’s shot came towards the end of the first half.

First, in minute 39, a shot by Reus was deflected to a corner kick by Kerzakov. Then Erling Haaland, in minute 42, finished off a wide pass inside the box from Jadon Sancho.

On the Zenit side in the offensive part little had come and the only shot on goal had been a deflected header by Sebastián Driussi after a center that the goalkeeper Roman Bürki mismeasured.

In the second half, Dortmund tried to give more speed to the movement of the ball and tried to reach the area with diagonal passes, but the clear arrivals continued to be conspicuous by their absence.

At last a penalty took Dortmund out of penalties. Kazaev committed a clear foul against Thorgan Hazard by grabbing him in a center that was not very dangerous.

Sancho took charge and scored. From there, Zenit tried to do something more forward. Dortmund concentrated on managing the advantage and coach Lucien Favre made several changes with clear defensive intentions.

However, in the discount came the second. A long clearance by Bürki was extended with a header by Jude Bellingham, which was used by Haaland who, after beating the back of the defense, reached the area and finished. It was the sentence.

You can also read:  The goodbye of Löw or the melancholic end of an era of three decades