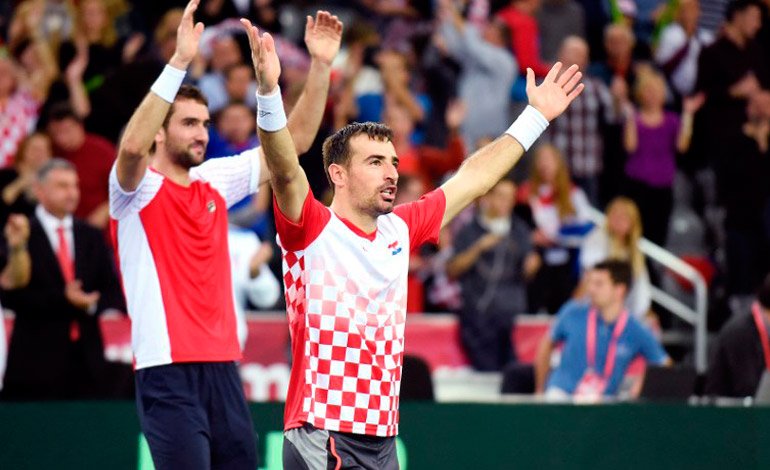 The double Croatian composed of Marin Cilic and Ivan Dodig, by beating the Argentine formed by Juan Martín Del Potro and Leonardo Mayer, by 7-6 (2), 7-6 (4) and 6-3, has placed Croatia with a favorable 2-1, which leaves him one point behind winning the coveted “Salad Bowl” of the Davis Cup.

Now, everything is at the expense of what happens this Sunday, on the last day, where Cilic will be measured against Del Potro, to follow Ivo Karlovic against Federico Delbonis.

After the draw (1-1) with which the first day ended, it was clear that the doubles match was of great interest and importance for both sides. Not surprisingly, the respective captains decided to take out their number one (Cilic, Del Potro), accompanied by their best player in the doubles ranking (Dodig, Mayer).

The match that, unsurprisingly, given the type of court on which the final is played, at the Zagreb Arena, was marked by the serve. So much so that only three rival service breaks were registered: two favorable to Croatia (second and third set) and one for Argentina (second set).

You can also read:  Murray suffers but joins Nadal in Wimbledon round of 16

The equality based on service was not so much by direct service points (6 for Croatia, 3 for Argentina), but rather by putting good first services that later, before a complicated return, allowed to crush on the net. And there, it is true that the Croatian duo had better percentages of points won with the first serve. But it is no less true that he made more unforced errors with the ball in play.

The proof of the total balance on the court is that the first two sets had to be resolved in the final thirteenth game: in the first, with relative ease, after the Croatian duo put on a clear 5 to 1, then closing with 7 to 2 ; in the second, more fought, with a tie 4-4, and three consecutive points later for the Croats.

You can also read:  Muguruza rules in women's tennis

It is true that in order to reach the aforementioned thirteenth game of the second set, Del Potro and Mayer had to counteract in the eighth game the break in service that Croatia had made in the third.

The third sleeve was the most uneven. The Del Potro-Mayer couple began to accuse the moral blow of having lost the first two.

It was enough for the Croatian couple to break the Argentine serve in the sixth game, which gave them a favorable 4-2, which later extended to 5-2, to take the game, 6-3, in the first ball that they had for This, and put the tie with a 2-1 for Croatia that leaves them very close to the title.

You can also read:  Azarenka gets into the Miami semifinals

Now, Argentina is forced to win both individual matches on Sunday if it does not want to become empty, as happened in the previous four Davis Cup finals that it played until Zagreb.

According to the world ranking, it seems like a more than complicated company. Not surprisingly, if the schedule is fulfilled and there are no substitutions, in each of the clashes the Croats have a better-ranked player (Cilic is sixth, Del Potro thirty-eighth; Karlovic twenty-first, Delbonis forty-first).

But Del Potro has beaten Cilic eight of the ten times they have met on the circuit; and Delbonis, despite falling three of the four times he has met Karlovic, has beaten the Croatian in the last game (Tokyo 2016). And yet, anything is possible. EFE.