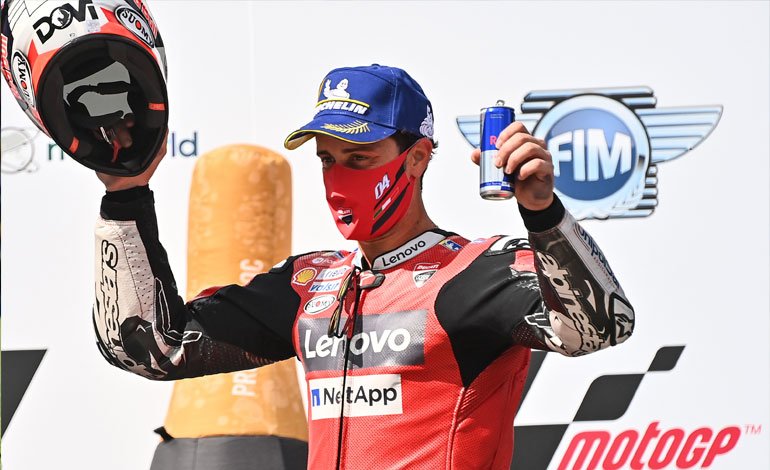 Andrea Dovizioso (Ducati) won the MotoGP Austrian Grand Prix after a race marked by accidents and falls, although fortunately there were no casualties.

The Italian rider achieved victory a day after Ducati announced that ‘Dovi’ will leave the team at the end of the season. The Spanish Joan Mir (Suzuki) was second and the Australian Jack Miller (Ducati-Pramac) was third.

“It is very strange for many reasons,” said Dovizioso after the race, with words of thanks to his team.

“This is not the time to talk, we have the championship,” he stressed when asked about the circumstance of winning this race a day after the announcement of his future departure from Ducati.

The terrifying images of #MotoGP today, where Maverick and #Rossi have come back to life. NEVER, EVER, had I seen anything like it. It is the total and absolute luck.

Runner-up in the world in 2017, 2018 and 2019, the Italian claimed his 15th MotoGP victory. For Ducati this victory in Austria marks its 5th in a row since the return of the Spielberg circuit to the World Championship. It is also the 50th in the highest category for Borgo Panigale’s signature.

You can also read:  Rosberg: I'm in this World Cup battle to win it, not to be second

«They told me this weekend that I would be on the podium and I answered that it would be difficult. But the bike was going well, “declared Mir after his second place. “I’m happy, it was a difficult race but our bike is competitive,” he added.

Frenchman Fabio Quartararo (Yamaha-SRT) retained the leadership of the World Championship despite finishing 8th this Sunday.

The race was marked by a spectacular accident after a clash between the French Johann Zarco and the Italian Franco Morbidelli.

Their bikes disintegrated as they bounced off the track and passed other riders, such as Italian veteran Valentino Rossi, who avoided them by a few centimeters.

“I was very scared. I’m shocked, the biggest risk of my career ”, declared the ‘Doctor’ to Sky Italia. «I saw a shadow, I thought it was the helicopter above, sometimes it happens during the race. In its place two projectiles passed, “he said.

You can also read:  Alonso "let go" of the steering wheel and dreams of seeing Spain champion

“The saint of motorcyclists did a great job today, it was very dangerous,” he added.

Morbidelli, who remained on the ground, was evacuated on a stretcher but was later seen walking, held by medical personnel.

Interrupted by a red flag to remove the remains of the bikes from the track, the race was resumed for 20 laps.

The Spanish Pol Espargaró (KTM) and the Portuguese Miguel de Oliveira also collided, and then the Spanish Alex Rins (Suzuki) crashed when he had managed to overtake Dovizioso to get first.

The big loser of the day was the Spanish Maverick Viñales (Yamaha). Although he started from pole position, he finished 10th, losing his second place in the World Championship in favor of Dovizioso.

The latter has not yet communicated in which team he will compete next year, if at 34 he decides to continue in MotoGP.

The Austrian KTM bikes, which raced at home this weekend after shining during the previous GP of the Czech Republic, with their first win in the category, also disappointed a bit with the 4th place of Brad Binder, who won last Sunday, his first MotoGP victory.

You can also read:  Hamilton: "This year we are going to have tight races"

It is true that the fall of Espargaró and Oliveira deprived the Austrian firm of placing two drivers in the top ten.

The current winner and six times world champion, the Spanish Marc Márquez (Honda), did not participate in this race because he broke his right arm in the first GP of the season. The date of his return to the slopes is not yet known.

Before MotoGP, the Moto2 race also witnessed a spectacular accident.

The Italian Enea Bastianini lost control of his motorcycle at the exit of a curve and the ground went, leaving the motorcycle and the rider in the middle of the track. The Italian’s Kalex was hit at high speed by Malaysian Hafyzh Syahrin.

The Asian was left lying on the asphalt and was taken to a hospital center by ambulance, but does not suffer serious injuries, organizers reported.

After a long pause to clear and clean the track, the race was resumed for 13 laps and Spanish Jorge Martín claimed victory. AFP (HN)