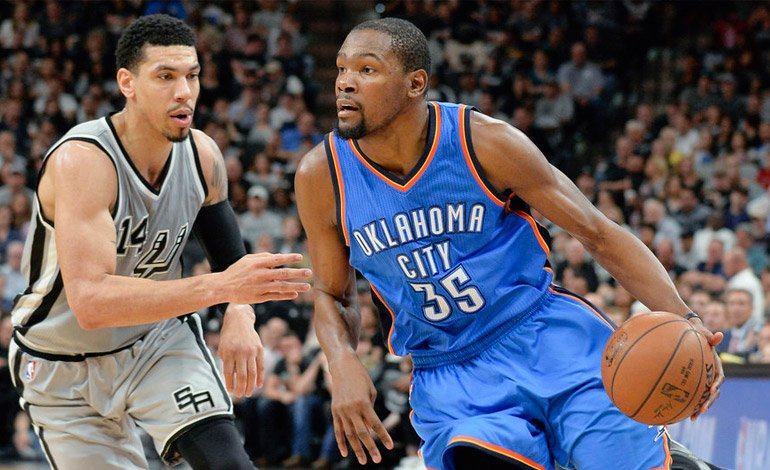 Once again, the combination of forward Kevin Durant and point guard Russell Westbrook was the ideal formula in the attack of the Oklahoma City Thunder who beat the San Antonio Spurs 113-99 in the sixth game of the playoff series of the Western Conference and made it to the finals.
The Thunder won 4-2 after having achieved two of the four wins on the road against the San Antonio team, which in its field, during the regular season, broke several records and only lost one game.
But this time, before the inspiration of Durant, who contributed 37 points, and Westbrook who reached 28, the Spurs had no answer.
The Thunder, who finished third in the Western Conference standings in the regular season, will have as rivals in the finals the Golden State Warriors, the current league champions and defending champions, who also eliminated the Golden State Warriors 4-1. Portland Trail Blazers.
The duel between both teams begins on Monday at the ORACLE Arena in Oakland.
Durant shot 12-24 from the field, including a three-pointer in four attempts, and was perfect (12-12) from the free throw line, and captured nine rebounds -all defensive-, while Westbrook achieved a double-double by sharing 12 assists.
But it would again be the New Zealand center Steven Adams who established the difference in the final score as a winning surprise factor by getting another double-double of 15 points, 11 rebounds, two ball recoveries and a block.
Adams dominated the Spurs’ big men again, including Duncan, who played his best game of the playoff series, but his contribution came too late because the Spurs’ bench didn’t respond either and the Thunder under rookie coach Bill Donovan was the best team in the series.
Shooting guard Andre Roberson got 14 points after scoring 5 of 8 shots from the field, including 3 of 5 triples, and grabbed seven rebounds.
Hispanic Congolese power forward Serge Ibaka played 34 minutes and contributed eight points and 10 rebounds, including nine defensive ones.
Ibaka scored 3 of 9 shots from the field, missed the three triple attempts he made, and scored 2 of 3 free throws, gave one assist and made three blocks, which left him the team leader in that facet of the game.
As a team, the Thunder had 47 (40-85) percent shooting from the field and 27 (6-22) from 3-point range, compared to 43 (40-93) and 35 (6-17), respectively. of the Spurs, who lost the duel under the hoops with 40 rebounds to 50 for Oklahoma City.
Forward Kawhi Leonard reached 22 points, grabbed nine rebounds, gave five assists and recovered three balls that did not prevent the surprise elimination of the Spurs.
Duncan, 40, who was able to play his last game as a professional, contributed 19 points, but only five rebounds, while power forward LaMarcus Aldridge stood out with a double-double of 18 points and captured 14 balls under the basket, including 13 defensive.
The veteran Argentine shooting guard Manu Ginóbili, 38, could have also played his last game as a professional in the NBA, and he did so by playing 23 minutes in which he got five points.
Ginobili made 1 of 6 shots from the field, including a three-pointer, and went 2-for-2 from the free throw line, in addition to dishing out two assists, grabbed a rebound (defensive), fumbled and was eliminated for six personal fouls. .
French point guard Tony Parker, who along with Duncan and Ginóbili were key in four of the five league titles that the Spurs have in their possession, did not shine either, keeping only six points and three assists.