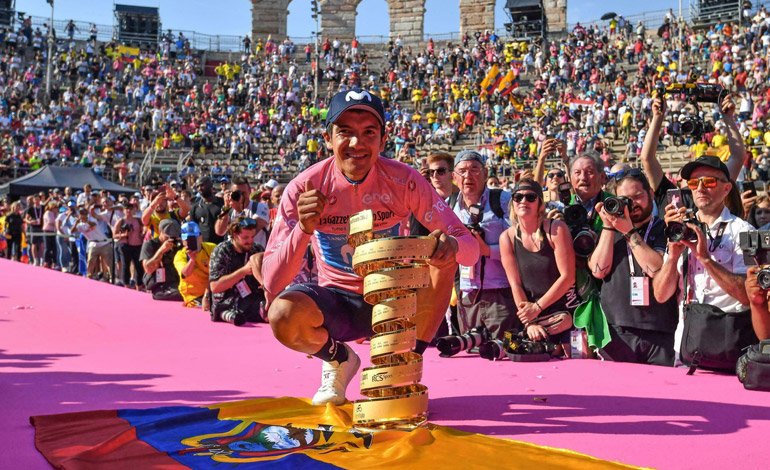 Ecuadorian Richard Carapaz conquered his first Grand Tour title by winning the Giro d’Italia, covering the last stage of the competition, which culminated in Verona.

Carapaz, who just turned 26 on Wednesday, leaned back excitedly on the handlebars inside the Verona Arena after completing the 17-kilometer (10.5-mile) individual time trial that closed the Giro.

“I don’t know what to say, it’s a unique feeling. I believe that for me it is the greatest triumph that I have been able to achieve in my life ”, affirmed the Ecuadorian of the Movistar team. “They are episodes that one can never imagine in life. Just as I dreamed it, I am fulfilling it. Now I believe that everything is possible ”.

You can also read:  French Peterhansel wins in the third stage of the Dakar-2019

The Ecuadorian wore the overall leader’s pink jacket since winning a demanding 14th stage on May 25.

Carapaz finished the three-week race with a one minute and five second lead over his closest rival, Italian Vincenzo Nibali, and 2:30 minutes ahead of Slovenian Primoz Roglic, who snatched third place from Mikel Landa in the general table. .

“I have no regrets, we all had a good Giro d’Italia, which was very close,” said Nibali. “I had great rivals, Carapaz showed that he is strong and that he deserved it … Carapaz did not steal anything, he was really tough.”

Both Carapaz and Nibali took the podium with their children for the award ceremony.

You can also read:  Dovizioso avoids incidents and takes a crashed Austrian GP

“It is a victory that I owe to my team, which has helped me achieve this great Giro d’Italia. It goes for them, for all my people and for Ecuador, Latin America and the whole world who are happy about this triumph, ”said Carapaz.

The winner’s parents also flew from Ecuador, their first time traveling by plane.

“Being able to live it here with my parents, my wife and my children is very special, a unique moment that I also owe to them,” he said.

You can also read:  21 years after the death of Ayrton Senna, McLaren remembers him