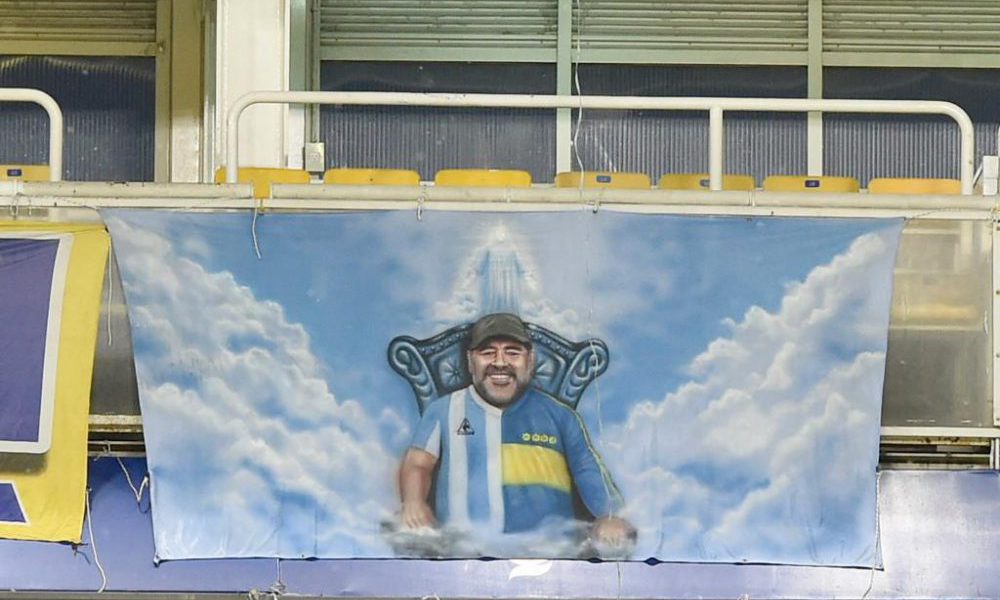 Argentine football commemorated this Saturday what would have been the 61st birthday of the star Diego Maradona, who died eleven months ago, with a series of tributes reminding him of who was one of the greatest figures of this sport and captain of the selected Albiceleste champion in the World Cup. Mexico-1986.

The main tribute was made at the La Bombonera stadium, where Boca Juniors, a club of which Maradona was a sympathizer and with which he became champion in 1981, and Gimnasia y Esgrima, the ‘Lobo’ he was directing as coach at the time, met. should his death occur, on November 25 of last year.

From hours before the match, Boca’s followers arrived at La Bombonera with allusive flags and also with masks with Maradona’s face, with the unique blonde lock that he wore in 1995, when he disembarked for his second stage at the Ribera club.

Dalma Maradona, the star’s eldest daughter, was in La Bombonera and received a painting with Boca’s shirt with the number “10” and the Maradona surname on the back, as well as a commemorative plaque in the hands of Captain Carlos Izquierdoz, in the middle of the ovation that thousands of fans gave him at the xeneize stadium.

Dalma Maradona could not hide the tears during the tribute that was made in memory of her father and followed the meeting from the box that Maradona himself bought in 1996 on the Boca court, and in which he was accompanied by Giannina, his younger sister , and former forward Daniel Osvaldo.

You can also read:  Barcelona players free from covid

“Olé ole olé, Diego, Diego”, sang the Boca followers, who also sang other songs dedicated 40 years ago to Maradona, when the Pibe de Oro played in the Auriazul entity and was decisive in the conquest of the Metropolitan Championship that season , and then had a second stage between 1995 and 1997, when he closed his stage as a footballer.

– Tribute of the League –

In minute 10, a video with the best images of Maradona playing in Boca was projected on the giant screens, and in the midst of an ovation a release of blue and gold balloons was made with the xeneize shirt flying upwards, in a ceremony as brief as it is emotional.

During the match, Luis ‘Pulga’ Rodríguez, summoned to the national team a few years ago when Maradona was the technical director of the Albiceleste, dedicated the first Gimnasia goal to him, after scoring a penalty, by kissing the image of the star that he wore on the jacket of the ‘Lobo’ from La Plata.

Maradona visited the Boca court for the last time on March 7, 2020, a few days before declaring the beginning of the Covid-19 pandemic, in a match that Boca beat Gimnasia, his team, 1-0, to become champion of the first division Super League.

You can also read:  Cycling world champion Julian Alaphilippe will not go to Tokyo 2021

Born on October 30, 1960 in Lanús (southern outskirts of Buenos Aires), Maradona would have turned 61 this Saturday, and Argentine football still mourns the death of one of its greatest stars, due to a cardiorespiratory crisis and days after having been operated on for a subdural hematoma on the head.

The Professional League stated that “being Maradona’s first birthday without his physical presence, the magnitude of his figure justifies the exceptionality of the aforementioned tribute for the only occasion.”

In each match of the nineteenth date, each team entered the playing fields with a white T-shirt with the image of Maradona stamped on the chest, and in each match it was possible to see hundreds of fans with tattoos alluding to the soccer star, or with T-shirts with the image of the remembered ‘Pelusa’.

At the Mario Kempes World Cup stadium, in Córdoba, where Talleres and Huracán faced each other, a huge flag was unfolded from a roof of the stalls, with the emblematic image of Maradona with the ball at his foot, in an action prior to the second goal that he scored. would score England in the World Cup-86.

At the Diego Maradona stadium, of the Argentinos Juniors club, where the star made his debut in the first division in 1976, a charity festival was held that will include a meeting with players from the Argentine team champion in Mexico-86 and other glories of Albiceleste football.

You can also read:  Messi: 'my dream is to win a title with Argentina'

Argentinos Juniors closed the day at night with an image of Maradona in virtual reality in the center of the field, while historical audios of the star were heard through the loudspeakers, such as the one remembered «my first dream is to play a World Cup, and the second is earn it”.

On Saturday, a sculpture of the sports idol was also inaugurated in the central square of the town of Santa Clara del Mar (400 km to the south), made of steel and concrete, and 13 meters high.

In recent days, the biographical series «Sueño bendito», produced by Amazon Prime Video and distributed to 250 countries in weekly episodes, with various stories about the life of the sports idol, filmed in locations in Argentina, Spain, Italy, was also released. , Uruguay and Mexico, and that has already generated a strong impact.

Tribute to Maradona in La Bombonera, on the first birthday without Diego …
🔟⚽💙💛💙#DiegoEterno ♾ pic.twitter.com/6fcsvY7aip

Thousands of boys dreaming what you dreamed.