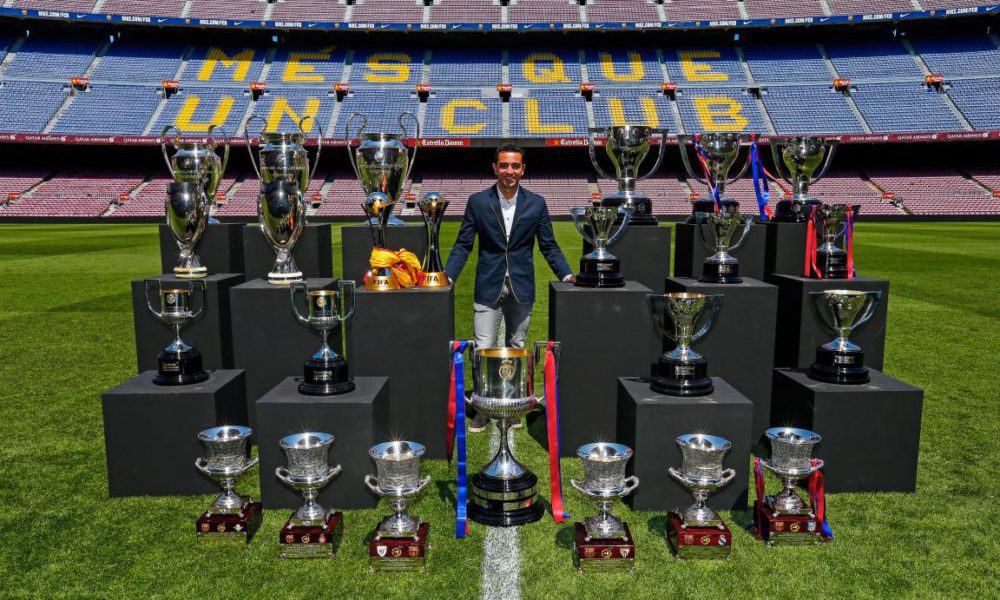 With a big event at the Camp Nou, where he built his legend as a player, Xavi Hernández started his time as a Barcelona coach this Monday, supported by some 10,000 fans who trust that he will be the one to restore the lost shine to the club.

Shouting “Xavi, Xavi!”, The brilliant ex-midfielder jumped onto the pitch where he marked an era, now dressed in a suit, to sign his contract with his family and the president of Barcelona, ​​Joan Laporta.

«Thank you very much, I do not want to get excited, but I am very excited. As I told you when I left here, we are the best team in the world and Barça needs demand, you cannot draw or lose, here you have to win, “Xavi promised the fans.

“Today is a historic day for Barça,” added a smiling Laporta shortly after signing the commitment that cost so much to close last week, and that ended with the payment of the millionaire clause to Al-Sadd Qatar, to achieve the freedom of Xavi.

The euphoria of the reception -with an act on the lawn itself, something unprecedented for a coach-, did not overshadow, however, the magnitude of the challenge facing the Catalan. At 41, and six after leaving the club where he grew up, Xavi is very clear on where to start.

You can also read:  Kylian Mbappé requests his departure from PSG

«It is not necessary to be harsh, it is a matter of order, of rules. There are rules that must be met, “he later explained to the media, where his ideology of possession game, known as DNA Barça, took off again.

“I come with a very clear idea, I have started it at Al-Sadd, and it has turned out very well,” he endorsed regarding his two years as a coach in Qatar, where he won several local titles.

Many of his players already know that ideology as well as he does, because in addition to growing up in La Masía like him, they shared part of the 767 games that Xavi played as a Barça player, winning 23 trophies, including four Champions Leagues and eight Leagues.

But mixing friendship and work does not scare the World Champion in 2010.

“I have friends within the squad,” Xavi acknowledged about Piqué, Sergio Busquets, Jordi Alba, Sergi Roberto or Ter Stegen. «It is precisely these whom I will press the most. The ones I know, the captains, should try to lead the dressing room and they are very important, “he added.

“For me it is an advantage, it happened to me at Al-Sadd and I have no problem,” he added.

You can also read:  Monterrey eliminates the champion Cruz Azul and goes to the quarterfinals of Mexican football

Xavi is also not afraid of the long shadow of Pep Guardiola, his coach in the golden years of Barça and with whom it is very difficult not to draw a parallel.

The now Manchester City manager was 37 years old, with no experience in the Spanish elite, when Joan Laporta, then in his first stint as president, commissioned him to take the reins of a turbulent Barça in 2008.

Although he did not want to feed the comparison, Laporta recognized the complexity of the moment that Xavi now faces.

«I think it is difficult for him, he has a complicated situation. It is a team that is yet to be made, “commented the manager, who told how Xavi assured him that he could get the maximum potential out of a team that seeks to rebuild itself after Messi’s hard departure.

The Argentine already congratulated his friend for taking over the Barça bench, Xavi said.

You can also read:  Pulisic will not start against Mexico

Immersed in a serious economic crisis, Barcelona is now ninth in the League and with a delicate situation in the Champions League, where life will be at stake before the end of the year. The poor results caused the board to terminate the contract of the former coach, Ronald Koeman, almost two weeks ago in search of straightening the lack of direction aggravated by the sudden departure of the Argentine star.

After several failed attempts, Xavi finally felt it was time to go home. Although others had also knocked on his door.

«We were talking with the Brazilian Football Confederation, and the idea [que proponían] It was to be an assistant with Tite and take the post-world team, for the next one ”, admitted the coach, who said he had no doubts about what decision to make.

«My illusion was to come to Barça. I have waited for the right moment, and I believe that now it is. I feel very prepared, I feel very confident, “he launched.

Xavi will lead his first training session on Tuesday, with a squad plagued by injuries and no internationals, traveling with his national teams. (AFP)