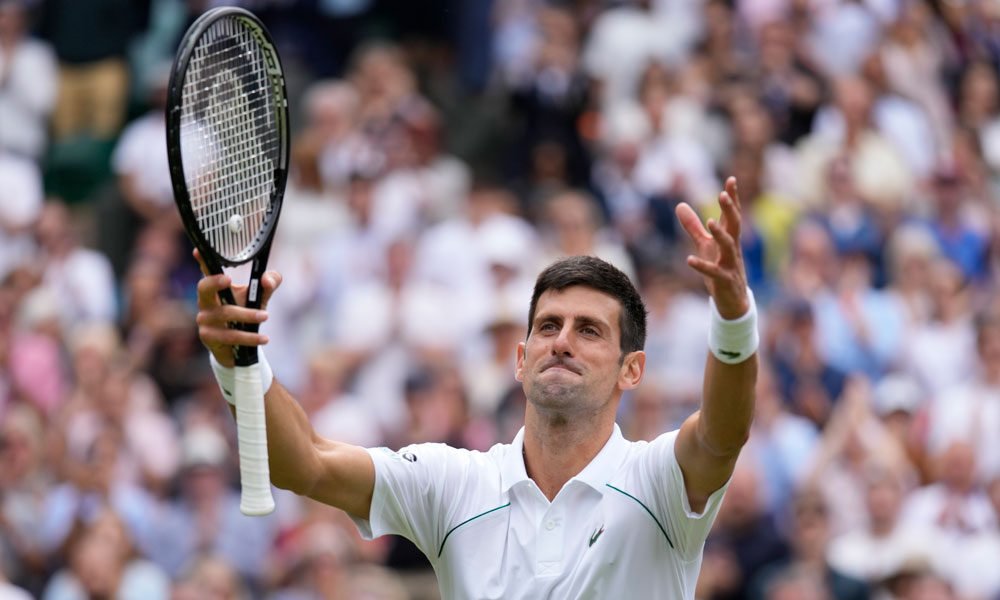 It was the last ‘Mad Monday’ at Wimbledon – starting next year, the full round of round of 16 matches will not be scheduled on the same day, a tradition that disappears like Sunday with no activity in the middle of the tournament – and, in amid all the chaos of simultaneous duels, Roger Federer was once again the focus of attention.

After all, the Swiss star boasts eight championships at the All England Club. Someone who had a couple of knee surgeries last season and is competing in a Grand Slam tournament for the last time before turning 40. How many more does he have left?

Perhaps that is why almost every point Federer was credited with beating Italian youth Lorenzo Sonego 7-5, 6-4, 6-2 was greeted by the crowd on Center Court as if it were his last, to applause for posterity. . This created a more vibrant atmosphere than in the other matches on the eventful day, one in Novak Djokovic and Angelique Kerber – they emerged victorious. In addition, more than 10 players celebrated by reaching the quarterfinals of the Slam on grass for the first time.

“In 20 or 50 years, we will see it as the end. This was the last Middle Sunday, the last Mad Monday (Manic Monday), ”Federer commented. “I am happy to have played in the Middle Sunday era. But you have to accept the times we live in. I get it”.

At 39 years old and having a significant birthday on August 8, Federer is the oldest quarter-finalist of the open era at Wimbledon, one that began in 1968.

You can also read:  Sharápova turns 30 a week after her return to the slopes

“On a certain average, it’s nice to see that the effort that he put in has paid off, to be able to play at this level,” said Federer, who had barely had an eight-game shoot this year before last week.

Djokovic, for his part, reached the quarterfinals for the 12th time at the All England Club, following his pursuit of completing the Grand Slam in one year. The Serbian star did not struggle to get rid of Chile’s Cristian Garín 6-2, 6-4, 6-2.

“It is no secret that I am trying to win as many Slams as possible,” said the world number one who needs to emerge victorious in another three matches this week to tie the all-time record of 20 titles that Federer and Rafael Nadal currently share. Between the men.

His next opponent will be the Hungarian Marton Fucsovics, one of the five men who for the first time rub shoulders among the eight best of the contest. The others are the Canadians Denis Shapovalov and Felix Auger-Aliassime, the Italian Matteo Berrettini and the Russian Karen Khachanov, this one after emerging triumph from a fifth set with 13 service breaks to overcome 3-6, 6-4, 6-3, 5-7, 10-8 to American youth Sebastian Korda.

“Well yeah, 13 breaks, it’s hard to explain,” said Khachanov. “It’s actually easy. When it’s your turn to receive, you start reading the serves and then, in the rallies, we both felt more stress. “

You can also read:  Nishikori will challenge Nadal again in search of his third title in Barcelona

Khachanov will be Shapovalov’s rival on Wednesday, while Berrettini will face Auger-Aliassime.

Federer was left without knowing who will be his next opponent. This was due to the fact that the last match of the men’s team, between Russian Daniil Medvedev and Pole Hubert Hurkacz, was suspended by rain in the fourth set on the Court, which has no roof.

The quarterfinals in the branch will be on Tuesday: Ash Barty vs. Alja Tomljanovic; Kerber vs. Karolina Muchova; Karolina Pliskova vs. Viktorija Golubic; and Aryna Sabalenka vs. Ons Jabeur.

Australians Barty and Tomljanovic, Belarusian Sabalenka, Tunisian Jabeur, Czech Pliskova and Swiss Golubic reached the quarterfinal round at the All England Club for the first time.

With 12 quarterfinal appearances at the Cathedral, Djokovic tied Arthur Gore, someone who did so more than a century ago, for third in the men’s all-time table. Ahead are Federer (18) and Jimmy Connors (14).

“It is the most special court I have played on,” said Garín, the first Chilean in the knockout round of the tournament in 16 years. “When I went in and saw it full, I didn’t think there were going to be so many people after so long.”

You can also read:  Nadal and Federer, who beats Schwartzman, advance in Shanghai

Barty suffered again with her serve, but raised eight of 10 break points and closed the duel with an ace by beating Czech Barbora Krejcikova 7-5, 6-3. The new Roland Garros champion had a 15-game winning streak broken.

Pliskova (8th) can already boast that she has reached the quarters in all the big events after beating Russia’s Liudmila Samsonova 6-2, 6-3.

Germany’s Kerber, who beat Serena Williams in the 2018 final, knocked out American teenager Coco Gauff by beating her 6-4, 6-4.

Tomljanovic advanced when British teenager Emma Raducanu had to withdraw due to poor health in the second set. Tomljanovic was dominating 6-4, 3-0.

And the Czech Muchova repeated in the Wimbledon quarterfinals for the second consecutive edition by defeating the Spanish Paula Badosa 7-6 (6), 6-4. AP (HN).