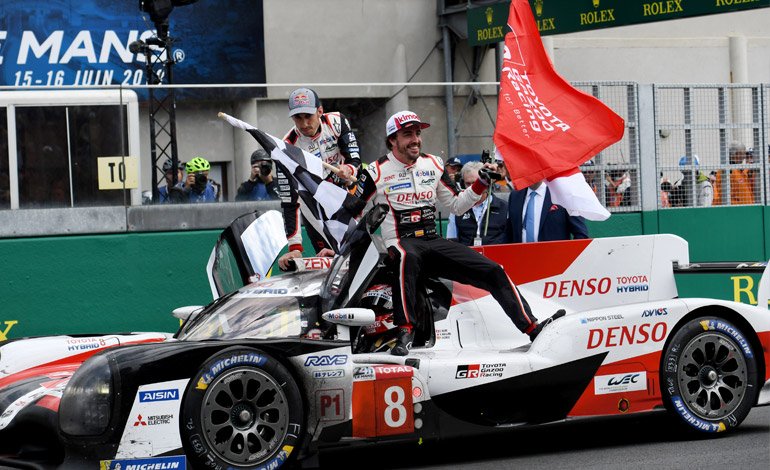 Barely 17 seconds separated Toyota No. 8 from Spaniard Fernando Alonso, Kazuki Nakajima and Sébastien Buemi, winners of the 24 Hours of Le Mans for the second time in a row, from Toyota’s No. 7 vehicle, driven by the Argentine. José María ‘Pechito’ López, Kamui Kobayashi and Mike Conway, after a whole day of fratricidal mourning.

A puncture one hour from the finish cost the latter victory, who had started from pole and had dominated the race almost from the beginning.

This success also makes Alonso and his teammates the 2018-2019 World Endurance drivers ‘championship, after Toyota secured the constructors’ championship in the previous test, held in May in Spa (Belgium).

The last echelon of the podium was occupied, six laps behind the winners, by SMP Racing of Russians Vitaly Petrov, Mikhail Aleshin and Belgian rookie Stoffel Vandoorne.

You can also read:  2021 Singapore Grand Prix canceled by COVID-19

At no point was the Japanese team’s overwhelming dominance in the premier LMP1 class in jeopardy, equipped with an energy recovery hybrid powertrain, while their opponents have less powerful classic thermal bikes.

The Toyota cars made their way very early and although the lead position changed hands overnight due to the intervention of the security cars, the No. 7 vehicle seemed to have taken a decisive advantage until 2:00 PM on Sunday (12:00 GMT).

It was at that moment that the Argentine, Japanese and British trio suffered the cruel puncture.

The Toyota No. 7 still managed to get ahead for a few minutes during a stop at the No. 8, but a final step through the pits to refuel left the positions as the final order of arrival.

You can also read:  In China, Ferrari makes fans dream

– “It’s not my last lap at Le Mans” –
“It is not fair for the car N.7. I can imagine how they feel after our last lap in 2016. It must be terrible, “the Swiss Buemi recognized sportingly.

In 2016, his teammate Nakajima was braked in his Toyota N.5 on the right side of the ‘pits’ at the start of the last lap, when he was leading. The car completed that last lap but in insufficient time and was finally disqualified.

“I wouldn’t say it’s a rematch because it affects teammates. When you race as a racing driver, you always race to win. So I did everything I could to get it, but I wasn’t smiling (crossing the finish line), that’s for sure, ”Nakajima said.

You can also read:  FIA to impose heavy penalties on offenders in F1

For Alonso, this victory and this world title are a nice farewell to the Sarthe circuit in which the double Formula 1 world champion will not race next season to focus on other challenges, such as a possible participation in the 2020 edition of the Dakar Rally. , although he has not confirmed it yet.

However, he assured that in no case was it a goodbye.

«This is not my last lap at Le Mans. I will return in the future, perhaps with a Hypercar or something else, “he said after his last change on the circuit radio mike.

Hypercars are a new category that will be introduced in 2021. AFP