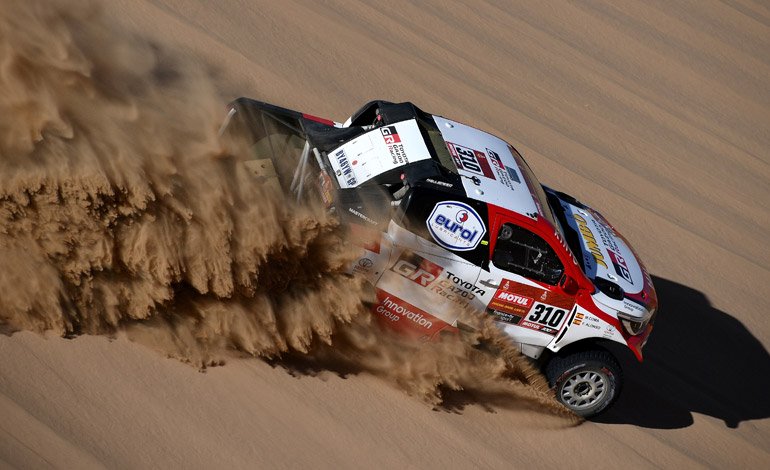 After a solid Dakar debut on Sunday, Spaniard Fernando Alonso discovered the vicissitudes of the rally in the second stage at Neom, Saudi Arabia, where he lost a wheel and missed more than two and a half hours.

Aware of his lack of experience in the discipline, the double Formula 1 world champion had warned that he was not going to Saudi Arabia in search of the final victory, but it is possible that he did not expect to see himself that far at the end of the second stage.

Reaching Neom 2 hours and 34 minutes behind the winner, his Toyota teammate Giniel De Villiers, the Spaniard occupies 48th position in the general standings.

A “big rock” at kilometer 160 caused all those problems. “He said ‘sorry’ to us, I think he knows it’s his fault,” said Jean-Marc Fortin, director of Toyota Overdrive.

You can also read:  The 2023 Dakar will feature 14 stages from west to east of Saudi Arabia

The incident cost him his left front wheel, “ripped off completely.” “He had the necessary (tools) to repair it but first he had to find the wheel because it had gone too far,” added Fortin. “When they found it, it was no longer round but oval.”

Alonso’s goal in this 42nd edition of the Dakar has not changed. The Spaniard, in search of experiences in the most important races of motorsport since his retirement from F1 in 2018, wants to take advantage of the experience and reach the end of the 12 stages, ideally with “effects”.

Relaxed upon arrival despite the incident, Alonso, whose co-driver is his compatriot Marc Coma, explained that he was blinded by dust from other participants in front of him.

You can also read:  Fernando Alonso, hospitalized after suffering an accident in Montmeló

“When you come to the Dakar, you also come because of the risks it entails. Today is one of them. I’m happy to be here and to be able to continue the rally, ”said the Spaniard.

A veteran of the event with 16 Dakar in his pocket, the South African De Villiers, 47, prevailed ahead of the Argentine Orlando Terranova (Mini), new leader of the general classification.

Among the favorites, Stéphane Peterhansel (Mini) also suffered some problems and did not seem at all happy on arrival. French is 12th overall.

In addition to mechanical problems, many of the participants suffered navigation difficulties, especially the Saudi Yazeed Al Rajhi, who led for much of the stage but was lost in the last ten kilometers.

While Terranova is the new leader of the general classification, the defending champion, Nasser Al Attiyah, is fifth.

In the motorcycle category, the Botswana Ross Branch (KTM) conquered the stage, the first of his career in the famous rally. In the general, the British Sam Sunderland (KTM) took the lead.

On Tuesday, the participants will make a 489 kilometer route, 404 of which is a selective sector, around Neom, a pharaonic project of a futuristic city in the north of Saudi Arabia, where the Dakar is held for the first time. AFP