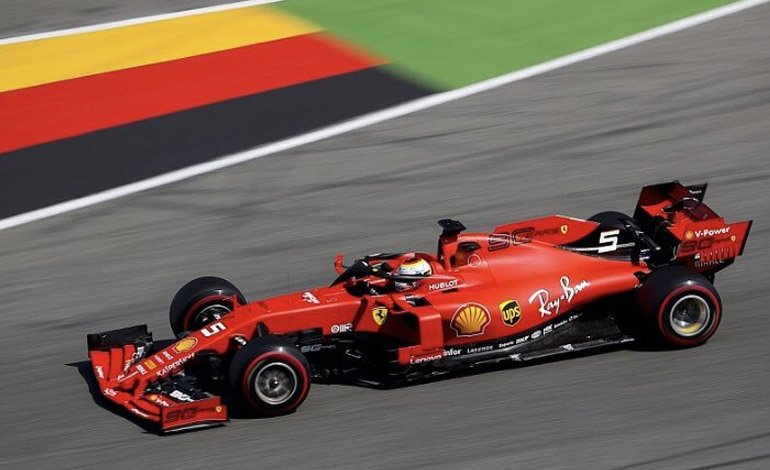 With high temperatures, Ferrari dominated in the free practice day of the Formula 1 German Grand Prix, in Hockenheim, but cannot help staring at the sky because the expected arrival of rain could dampen the Scuderia’s aspirations in the qualifying session of Saturday.

Sebastian Vettel, looking to gain confidence in front of his crowd after leaving the track last year when he seemed to have the race won, was fastest in the first free practice session.

His Monegasque teammate, Charles Leclerc, followed in his footsteps in second, being the fastest of the day with a time of one minute, 13 seconds and 449 thousandths, 124 thousandths better than the German and 146 thousandths faster than the British Lewis Hamilton (Mercedes).

The Ferraris were the fastest on this day, but the results are merely indicative before qualifying, scheduled for Saturday at 3:00 p.m. local time (1:00 p.m. GMT).

The high temperatures should soften, even dropping below thirty degrees Celsius, and even storms are expected, which would make Saturday very unpredictable, which could come to the rescue of Mercedes.

“It is difficult to draw conclusions because we do not know what Mercedes and Red Bull have had to do because of the heat. It would have been good to have a race with such heat, but we have done our homework and we hope to repeat this on Saturday and Sunday, “said Vettel, aware that the weather forecasts are different for the weekend than those experienced this Friday.

Hamilton, the World Cup leader 39 points ahead of his Finnish teammate Valtteri Bottas and 87 over the Dutch Max Versteppen (Red Bull), 100 over Vettel and 103 over Leclerc, “crossed his fingers” on Thursday that those rain forecasts for the weekend held.

You can also read:  Ecclestone presents himself as a victim of blackmail at the beginning of his trial

«The weekend will be completely different (to this Friday), with the rain perhaps. We will have to be very dynamic, reactive to the weather and to the settings of the car, “estimated Bottas this Friday.

Hamilton is particularly fond of driving in the rain and is aiming at Hockenheim for an eighth victory in eleven races this season – impressive figures that seem to catapult him to a new world title.

– The improvement of Racing Point –
Of the ten Grands Prix held so far this year, Mercedes has won nine. Only the Austrian Grand Prix escaped him, where Verstappen’s Red Bull won.

The second free practice session was also marked by a departure from the track by Frenchman Pierre Gasly, who only finished the 15th time lap of the day. He slammed into the safety barriers at the last corner, damaging the left side of his car.

Gasly declined to comment to the press and raises questions for the weekend, after a disappointing start to the season and his improvement in the middle of the month at the British Grand Prix.

The Mexican Sergio Pérez (Racing Point) entered the ‘Top 10’ of the times of the day, in a tenth place.

His Racing Point teammate, Canadian Lance Stroll, was seventh, so the improvements made by his team seem to have paid off.