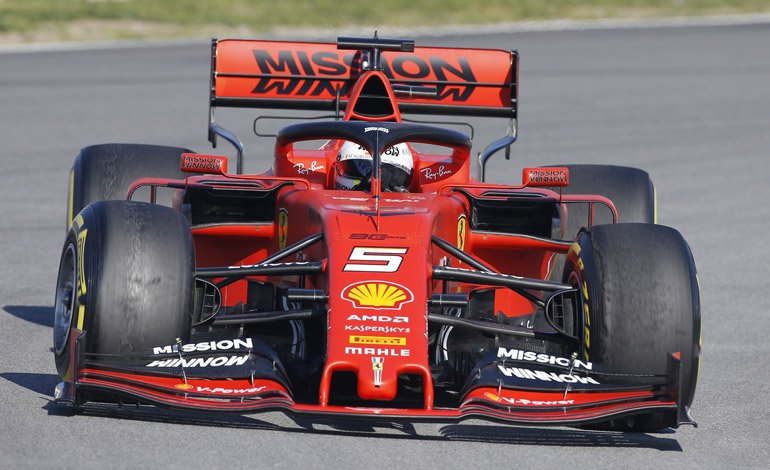 The Ferraris dominated Friday’s two free practice sessions at the 13th round of the Formula 1 World Championship Belgian Grand Prix, showing off their ambitions for Sunday’s race, even though they have yet to claim any victories this season.

Sebastian Vettel in the first session and Charles Leclerc in the second set the best times. The young Monegasque was faster than the German, on a sunny day and with high temperatures in Spa-Francorchamps.

The second rehearsal session was interrupted a few minutes before the end due to an engine problem at Sergio Pérez’s Racing Point. The Mexican, who has just renewed three more years with Racing Point, had had time to set the fifth best time, just behind the two Ferraris and the two Mercedes, and even ahead of Max Verstappen’s Red Bull.

You can also read:  Laia Sanz: "For me it is just as hard as for men"

With one minute, 44 seconds and 123 thousandths, Leclerc beat Vettel by 630 thousandths and the first of the Mercedes, Bottas, by 846 thousandths.

Friday’s free trials serve primarily to evaluate the different race setups rather than a matter of timing. This hierarchy could change significantly in the third free practice session, on Saturday, and especially in the afternoon qualifications.

Sebastian Vettel won the race last year at Spa and is confident of repeating that success on Sunday, to serve as a springboard for the Scuderia before the latter part of the season.

The Mercedes have clearly dominated the season thus far and Lewis Hamilton has a comfortable World Championship lead with nine races remaining.

The Briton looks set for a sixth world title, although he has seen Max Verstappen and his Red Bull make a quantum leap in the last two races before the F1 mid-season break. The young Dutchman is in third place in the World Cup, behind Bottas, who has just seven points more.

You can also read:  Pagenaud topped another Grand Prix podium

Behind the three leading teams, the fight seems balanced by being “the best of the rest.”

At the moment, McLaren-Renault is showing a slight advantage, but its drivers were only eleventh (Carlos Sainz Jr) and fifteenth (Lando Norris) in the second session of practice on Friday in Belgium.

Thai Alexander Albon, who made his Red Bull debut at Spa after taking the seat of Frenchman Pierre Gasly, ‘demoted’ to sister team Toro Rosso, was only tenth in the second session.

You can also read:  Williams wants free Mercedes engines in exchange for Bottas

“He did a good job on his first day,” said Red Bull skipper Christian Horner, however. “He is very intelligent, he asks the right questions and it has been a positive first day,” he estimated.

Albon is one of the drivers who will face penalties on Sunday’s starting grid for having changed mechanical elements of their cars. He will start from the end of the grid, as will Lance Stroll and Daniil Kvyat (Toro Rosso), while the two Renault drivers, Daniel Ricciardo and Nico Hülkenberg, as well as Carlos Sainz Jr (McLaren) will receive a penalty of five places each. AFP