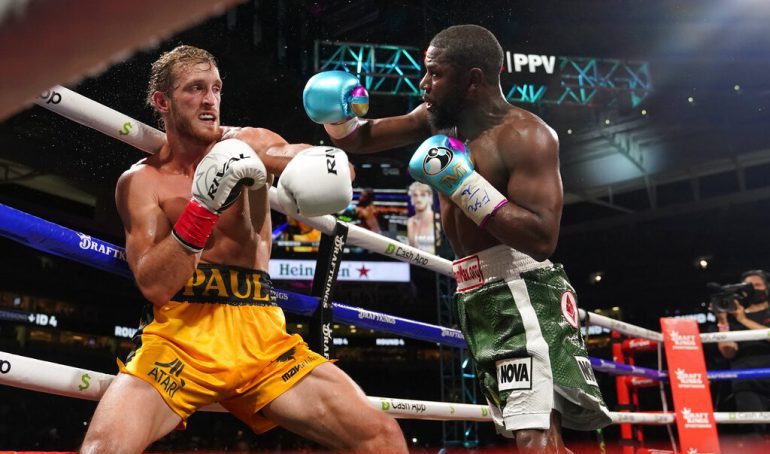 Mayweather, who weighed 155 pounds with his opponent tipping the scales at 189.5 pounds, delighted a large crowd at the home of the Miami Dolphins in the NFL.

Intermittent rain throughout the night failed to slow down Mayweather’s first fight since defeating Japanese kickboxer Tenshin Nasukawa in December 2018.

With viewers like former heavyweight champion Evander Holyfield watching from ringside, the 26-year-old Paul produced some threatening moments but not close enough to upset Mayweather, who ended his boxing career in 2017 with a 50-0 record after beating mixed martial arts star Conor McGregor in Las Vegas.

You can also read:  Guatemalan mayor knocks out boxing match to raise money

This Sunday’s fight was declared an exhibition rather than a fully licensed professional match, which meant there were no judges and the only way to win was to stop or knock out the opponent within eight scheduled rounds of three minutes each.

Paul, who was in his third fight after two against fellow YouTuber KSI, was predictably outmatched by 44-year-old Mayweather, who barely broke out in a sweat and delivered a series of punitive blows to prevent his American opponent from advancing.

The fight, aimed at “entertaining and making money,” was hoping to hit two million in pay-per-view (PPV) sales.

Mayweather has been on a wave of comebacks that brought former heavyweight world champion Mike Tyson, 54, back into the ring last November against fellow fifty-year-old Roy Jones Jr.

That same night, Jake Paul knocked out former NBA player Nate Robinson in an evening that grossed more than $ 80 million in television sales.

After Mayweather, the next legend to step into the ring is the 48-year-old Mexican-American Oscar de la Hoya.

Last month, Mayweather and Logan did their best to heat up their show during a photo shoot that turned into a widespread pseudo-battle in front of the media.

More and more promoters and boxers are ready for creative formulas to take advantage of the attention that Internet figures like the Paul brothers receive.

According to the rules of the fight, there were no official judges and none of the fighters was declared the winner. (GG) (AP)

You can also read:  Ali became a boxer for theft of his bicycle