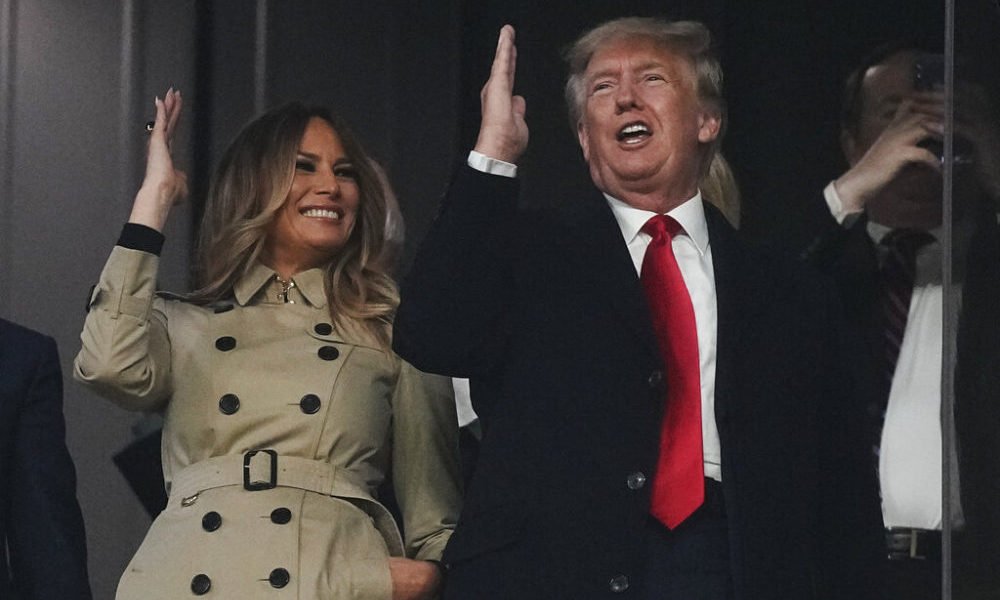 Just months after urging a boycott of Major League Baseball, former President Donald Trump smiled and waved the tomahawk to harangue the Atlanta Braves in Game 4 of the World Series on Saturday.

Trump stood next to his wife Melania and performed the move along with Atlanta fans, prior to the match, from a private suite.

Some political allies were expected to join Trump in watching the game, including Senate candidate Herschell Walker.

Trump issued a mass email statement to supporters Saturday announcing that he planned to attend the Fall Classic game.

“I am looking forward to being in the World Series tonight in Atlanta. Thanks to Baseball Commissioner Rob Manfred and Randy Levine of the New York Yankees for the invitation. Melania and I are looking forward to a wonderful night, watching two great teams! ”, He said.

You can also read:  Four Cuban fighters will not be able to go to the World Cup for testing positive for covid-19

Major League Baseball denied extending the invitation. “He requested to attend the game,” they indicated.

Lavine is president of the Yankees.

The visit to Truist Park gave Trump a chance to be seen alongside Walker, who once won the Heisman Trophy with the University of Georgia and excelled as a running back with the Dallas Cowboys and Minnesota Vikings in the NFL.

He also played in the USFL, with the New Jersey Generals, owned by Trump. Since that experience in the missing league, both are friends.

Trump has encouraged Walker to run for senator.

You can also read:  Altuve shines his Player of the Week award and Pérez drives in five

Trump urged a boycott of major league games after Manfred withdrew the All-Star Game from Atlanta, which ended up taking place in Denver.

President Joe Biden was in favor of moving the game, although some Braves fans and business owners along Truist Park felt they were being unfairly punished.

Manfred’s decision in April followed a protest against Georgia’s new electoral law, which includes the requirement for identification for votes sent by mail. Critics believe the measure will negatively affect African-American communities.

Trump would have chosen Atlanta in hopes of getting a friendlier reception than seen during his previous World Series appearance, when he was acting president. He was booed when he sat in the stands to watch Game 5 of the 2019 Fall Classic between the Astros and Washington at Nationals Park.

Trump did not appear on the giant Truist Park video screen before the game. (AP)