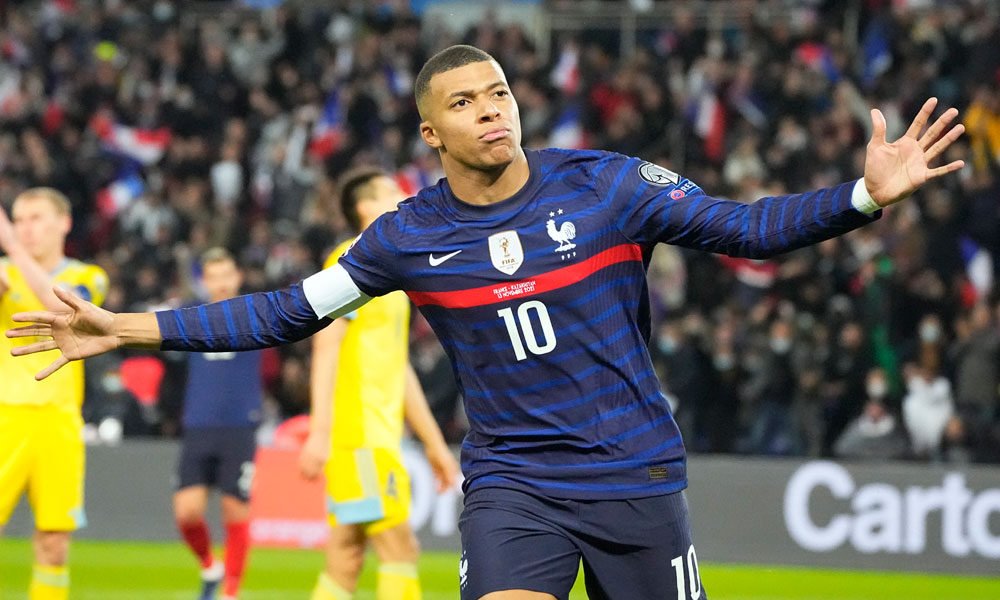 Loved in the last European Championship for the missed penalty against Switzerland, Kylian Mbappé definitively sealed his reconciliation against the French fans by scoring his first international quadruple in the historic defeat against Kazakhstan (8-0), one of the most bulky in the history of Les Bleus, which places the world champion mathematically in Qatar.

Karim Benzema, on passes from Theo Hernández (author of two assists) and Mbappé himself, enlarged the French banquet with two other targets in the second act.

The Real Madrid striker, considered one of the favorites for the Ballon d’Or, already has 35 goals with the gala shirt, the last eight achieved since he returned to the national team last June. Adrien Rabiot and Antoine Griezmann (penalty) closed the account.

With the bulky result tonight, «Les Bleus», who have not missed a World Cup since 1994, thus distanced themselves 4 points from the second Finland, with one day remaining to conclude the qualifying phase.

Didier Deschamps’s men dispatched the Asian team in the first hour of the match, in which Mbappé scored three goals, two on the first touch (minutes 6 and 12), as a scorer, and another from the head (min.32), one specialty that does not dominate especially.

You can also read:  Hazard, sick in Granada due to gastroenteritis

The 22-year-old PSG forward has already scored 22 goals for France in 52 international matches.

Acclaimed for his stadium in the Parc des Princes, the player definitely made peace with the exhibition this Saturday. He had taken an important step in October, in the League of Nations, a tournament in which he scored against Belgium and in the final defeated against Spain.

The 1998 and 2018 world champions enjoyed this cold night the most placid match of the qualifying phase, despite not having the injured Paul Pogba and being played at the Parc des Princes stadium.

In this coliseum, the France of Eric Cantona, David Ginola and the then player Didier Deschamps surely suffered the most traumatic defeat in their history, when they were removed from the 1994 World Cup in the United States for a defeat against Bulgaria in November 1993 (1- 2), dictated by a goal from Emil Kostadinov in the last minute.

Almost 30 years later, history was far from repeating itself. France stepped on the accelerator from minute 1. Mbappé opened the scoring with a touch of class from Theo Hernández, who shared the starting eleven with his brother Lucas, thanks to an overture by Karim Benzema.

You can also read:  Bolsonaro denies pressuring Tite to leave the Brazilian team

The Parisian attacker, served by Coman, made the second in an untimely start by the Kazakh goalkeeper Pokalitov. In a second assist from the Bayern Munich player, Mbappé placed his third chip in the match. At the origin of both plays was the Sevilla player Koundé.

BENZEMA OVERCOMES TREZEGUET AND SUM FOR THE GOLDEN BALL

Benzema was invited to the feast with two goals from the area mouse, one from Theo Hernández (minute 55) and another from Mbappé (59). The Real Madrid forward, in his 93rd international game, became Les Bleus’ fifth historic scorer (35). This time he overtook David Trezeguet (34).

The number 19 of the selection left in the 70 acclaimed by the fans, hoping that his two goals would serve to boost his career for the Ballon d’Or.

Rabiot, heading a corner, Griezmann from eleven meters and Mbappé again put the icing on the cake to the eight that France did to the Kazakhs.

You can also read:  River and Barcelona challenge Brazilian power in the Libertadores

Incidents: Match valid for the 2022 World Cup in Qatar, corresponding to the seventh day of group D, played at the Parc des Princes stadium in Paris, before some 45,000 spectators. A minute of silence was observed to pay tribute to the 130 fatalities and 350 injured on the sixth anniversary of the November 13, 2015 attacks. EFE