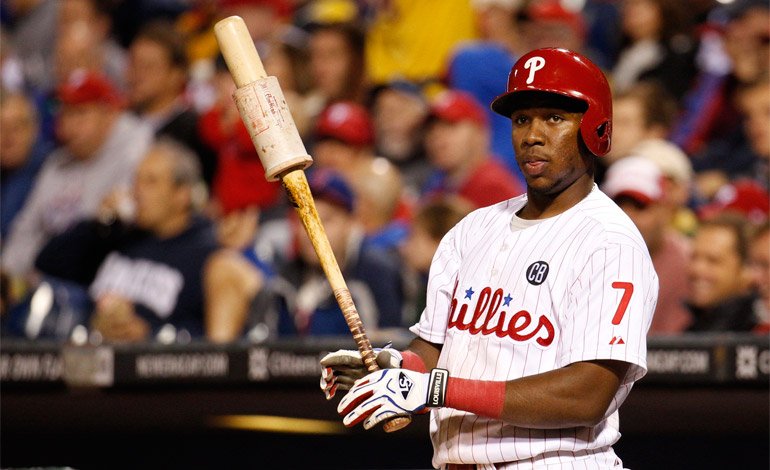 The explosive power of Latin American bats was once again present in the diamonds of the Major Leagues, with the Dominican third baseman Maikel Franco as the best protagonist, who hit a grand slam.
While the Venezuelan third baseman Ender Inciarte also shone as the protagonist by hitting a couple of homers that helped his team win.
Franco hit back full and emptied the house for the Philadelphia Phillies, who lost 4-5 against the New York Mets.
The Dominican third baseman hit his second home run of the season, this time with a grand slam in the sixth inning.
Franco waited for pitches from fellow reliever Hansel Robles and bounced the ball off the field when he had a full house and there were two outs in the inning.
The Cuban Yoenis Céspedes and the Venezuelan Asdrúbal Cabrera drove in two runs each for the Mets and were also protagonists with the power of their bats.
Venezuelan Inciarte hit two home runs for the Atlanta Braves, who beat the Miami Marlins 5-4.
Inciarte (2) punished the Marlins twice in the third inning with a four-corner hit, taking a runner ahead.
In the eighth he returned to send the ball to the street, without runners ahead.
The Dominican relief Arodys Vizcaíno (1-0) scored the victory in work of an episode, striking out two enemies.
Dominican second baseman Jonathan Villar blew the ball off the field in the Milwaukee Brewers’ 2-0 shutout win over the Toronto Blue Jays.
Villar (3) did it in the sixth inning, without teammates ahead.
The pairing of Venezuelan shortstop Elvis Andrus and Dominican ranger Carlos Gomez was instrumental in hitting home runs in the Texas Rangers’ 8-3 victory over the Los Angeles Angels.
Andrus (3) hit the bat in the second episode, alone, while Gómez (2) hit from four corners in the seventh, also a homer that went out of the park without anyone in circulation.
Venezuelan third baseman Pablo Sandoval also homered in the Boston Red Sox’s 5-12 loss to the Baltimore Orioles.
Sandoval (2) hit back full in the fourth inning, with a teammate on board.
His compatriot Jose Altuve had three singles and two walks to help the Houston Astros overcome a five-run deficit and defeat the Seattle Mariners 10-5.
Puerto Rican veteran Carlos Beltran drove in three runs for Houston, which was 5-0 down after three innings. The Astros scored three times in the seventh off Dan Altavilla (1-1) to get 6-5 up, after Alex Bregman’s RBI double broke the tie.
For the Astros, Altuve 3-3 with three runs scored. 5-2 strap with one scored and one towed; Beltran 5-2 with three RBIs. Cuban Yulieski Gurriel 5-2 with an RBI.
The negative note of the day for Latin American players was the announcement by the Los Angeles Dodgers that they had placed Venezuelan outfielder Franklin Gutiérrez on the 10-day disabled list (retroactive to April 11), due to a hamstring strain. left.
To replace Gutierrez on the active roster, Los Angeles moved up from Triple-A Oklahoma City to guard Trayce Thompson.
Gutierrez, 34, was injured when caught in a robbery attempt Monday at the Dodgers’ game against the Cubs. In six games of the young season, he is 13-3 (.231), with two runs scored and two doubles.

You can also read:  Wilson Ramos is out all season with Cleveland Indians due to injury