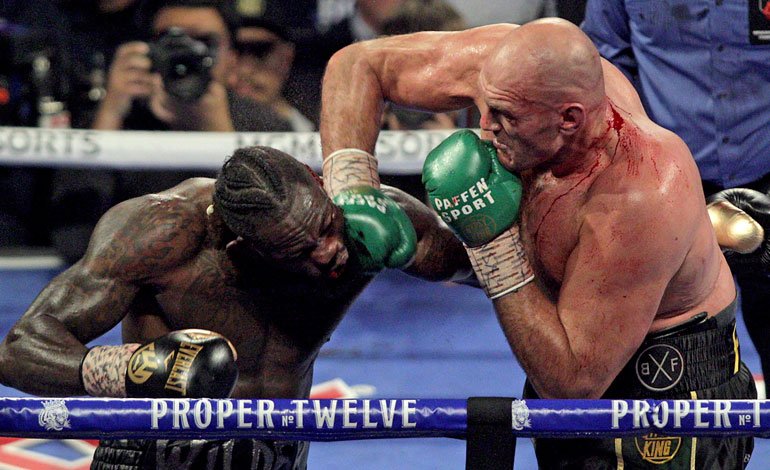 In a dominated bout from start to finish, Britain’s Tyson Fury defeated hitherto undefeated Deontay Wilder by TKO in the seventh round and snatched the World Boxing Council (WBC) heavyweight title from him.

The fight was one of the most anticipated of the last years and had to resolve the dramatic tie with which it concluded its first and memorable confrontation fourteen months ago. But the equality of that fight between undefeated fighters disappeared this Saturday as soon as the first bell rang at the MGM Grand Garden Arena in Las Vegas (Nevada).

Fury broke the odds by clearly dominating the American and taking him to the ground several times in the third and fifth rounds before, in the seventh, the towel was thrown from his corner and the TKO was declared, prompting brief complaints from a Wilder staggered visibly bleeding from his left ear and mouth.

I just wish my corner had let me out. I’m a warrior, that’s what I do (…) But there are no excuses, I’ll be back “, said Wilder, who after his disappointing performance is left with a balance of 42 wins, 1 loss and 1 draw.

You can also read:  'Rocky' Martínez, confident in defending his title against Berchelt in Mexico

Fury (30-0-1), the only boxer who Wilder has not beaten by knockout, wanted to recognize the value of his great rival in front of the 15,816 spectators that packed the stadium.

“I want to thank Wilder, who came here tonight and fought. He is a warrior, he will be champion again, “said Fury before beginning his particular celebration.

“Now I want to say that the king has returned to the throne,” cried the new monarch euphoric before launching himself to sing several stanzas of the song “American pie” alone, then asking the audience to accompany him.

– The «Gipsy King» regains the throne –

The histrionic British fighter, 31, started his show from the presentation. From the dressing room he came out carried in soaring on a golden throne and wearing, foreboding, a crown on his head.

Fury is champion again after he lost his WBA (World Boxing Association) and WBO (World Boxing Organization) belts in 2016 to Ukraine’s Wladimir Klitschko. Fury only returned to the rings two years later after a battle with depression and drinking and drug problems that put his career at risk.

You can also read:  Boxer Tyson Fury wanted to "die" during his depression

On Saturday he appeared with 7 kilos more than the previous fight (he weighed 124 kilos for Wilder’s 105) but determined to intimidate his rival with his size and punch from the first round. In the third, a strong right hand dropped Wilder, who tried to regain his balance but fell again moments later from a slip.

A left blow sent the American back to the canvas in the fifth round. In the seventh, Fury was dealing a barrage of blows at him when referee Kenny Bayless called off the fight with 1:39 left after Wilder’s corner threw in the towel.

The fight had a completely different development from the first chapter of the Fury-Wilder saga, held in December 2018 in Los Angeles, when it was the American who knocked out the British twice, who managed to resist until the end.

Tyson and Lewis themselves and former world heavyweight champion Evander Holyfield received recognition in the ring before the fight, a gesture aimed at highlighting that the top flight is once again in the center of boxing’s attention.

The president of the Top Rank company, Todd duBoef, told ESPN that on Saturday he broke the box office record for a heavyweight fight, with 16.9 million dollars, surpassing the 16.8 million of the rematch by the 1999 title between Lewis and Holyfield.

These numbers, however, are a far cry from the box office record of $ 72.2 million generated by the Floyd Mayweather-Manny Pacquiao clash in 2015.

The expectation will now focus on whether a third of the Fury-Wilder is produced or if the Briton decides to compete with his compatriot Anthony Joshua -current holder of the WBA, WBO and IBF titles- for the unification of the reigns of the weights heavy. AFP