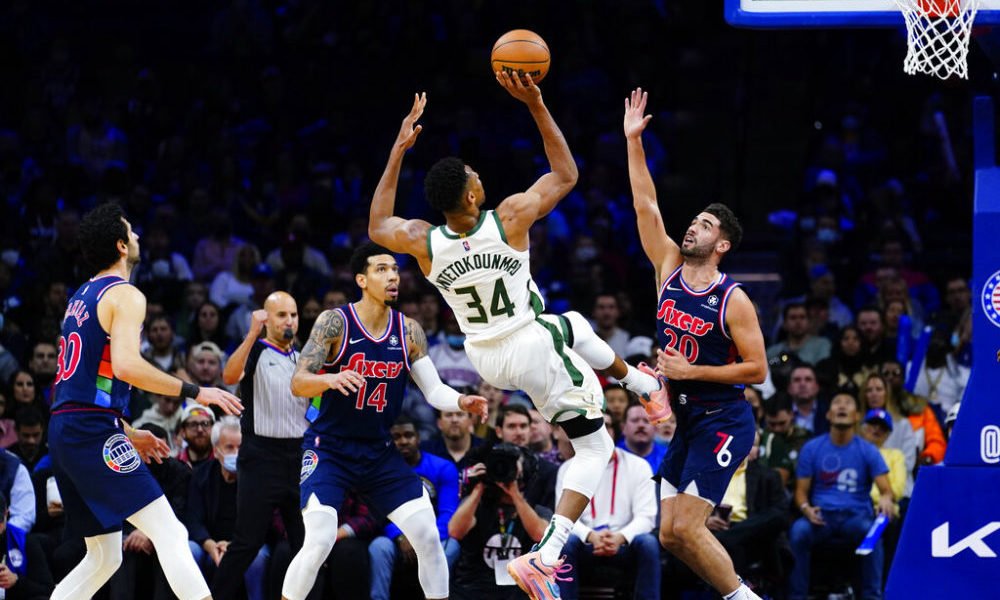 The current champions Milwaukee Bucks relied on the skills of Greek star Giannis Antetokounmpo last night to beat the Philadelphia 76ers with a score of 118-109, in one of the three games scheduled for the day in the NBA.

Two sets were decisive for the Bucks to overcome the score twice when they took the second quarter 31-19 and the fourth and last with a score of 27-16.

Forward Antetokounmpo led the champions’ offense with 31 points and 16 rebounds, followed by Grayson Allen with 25 points and center Bobby Portis with 19 and 10 sacks.

For the Sixers, Tyrese Maxey stood out with 31 points, Georges Niang with 21 points coming off the bench, Shake Milton with 20 cards and center Andre Drummond with 17 points and a whopping 20 balls recovered in the fight under the basket.

Allen hit a key triple at the end of the fourth quarter that drove the team away and sealed the victory 118-109.

The NBA champions won this way one day after visiting the White House, where they were received by the president of the United States, Joe Biden.

The Bucks won for the second time in the last seven meetings against the Sixers, who played without Cameroonian Joel Embiid, who was one of the four players affected due to the NBA’s health and safety protocols for covid-19, along with Tobias Harris, Matisse Thybulle, and Isaiah Joe.

Philadelphia took their last lead of the game with a Maxey shot that made it 102-101 with 5:43 left.

You can also read:  Raptors tie series with Miami Heat

Still, back-to-back 3s by Portis and Pat Connaughton put the Bucks ahead 107-102, and Allen nearly sealed it with another triple that put the Bucks up 114-107 with 1:30 left, an already decisive lead.

On the other hand, the Utah Jazz beat the Atlanta Hawks with a score of 110-98 with an excellent performance from point guard Donovan Mitchell, who overflowed with 27 points and five assists.

For the Hawks, the shooting man was Kevin Huerter with 28 points and Clint Capela of Switzerland, who totaled 13 points with 12 sacks under the boards.