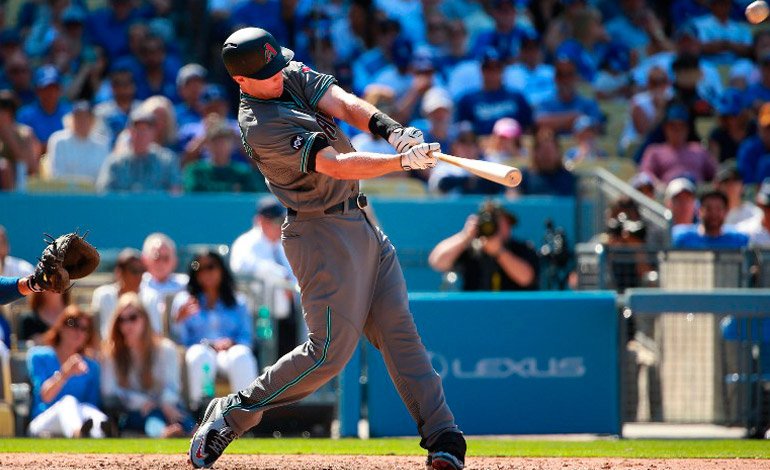 The Arizona Diamondbacks confirmed that they have in the first baseman Paul Goldschmidt the key player in their attack and the Miami Marlins the Venezuelan Martín Prado who helped them to be successful teams in the day of professional baseball in the National League.
Goldschmidt hit a home run that broke the tie in the eighth inning and in the next he drove in the run that ensured the victory of the Diamondbacks 4-2 against the Los Angeles Dodgers, who debuted in their field with the first series of the new season.
The first baseman gave the Diamondbacks a 2-1 lead with his second homer of the season, off Chris Hatcher (1-1), who then gave up a two-out double by catcher Welington Castillo before giving up back-to-back walks. Jake Lamb (intentional) and Cuban Yasmany Tomás to load the bases.
That was it for Hatcher who had to walk off the mound amid boos from Dodgers fans.
The Diamondbacks scored two runs in the ninth, on a triple by Socrates Brito and a ground ball to shortstop, in which Goldschmidt was thrown out but sent his teammate to the register.
Japan’s Kenta Maeda gave up five hits and no runs in six innings, striking out four and walking one.
He became the second Japanese to start the Dodgers’ first game of the season at home, since Hideo Nomo did the same in 1996 and 2004 to walk away without a decision.
Reliever Tyler Clippard (2-0) gave up one hit in one inning and struck out an opposing batter for the win.
Brad Ziegler was in charge of taking the last three “outs” of the ninth episode and credited his first rescue so far this season.
Latino batting was present in the Diamondbacks’ offense with Dominicans Jean Segura going 4-1, Brito 5-1 with a run scored and an RBI, while Castillo went 4-3.
Outfielder Dee Gordon lit the fuse for the decisive rally with a single on the 16th pitch of his at-bat and the Marlins beat the New York Mets 2-1.
In a pitching duel, Noah Syndergaard struck out 12 for the struggling Mets and was relieved with the game tied 1-1 after seven innings.
Miami’s ace, Cuban José Fernández, recovered after a shaky start and was able to cover five innings.
Derek Dietrich hit an RBI single in his first start with the Marlins, while pinch-hitter Martin Prado drove in the go-ahead run with a sacrifice fly in the eighth off Jerry Blevins.
Starter Charlie Morton pitched six solid innings and outfielder Odubel Herrera hit a 3-pointer as the Philadelphia Phillies beat the San Diego Padres 3-0.
The Phillies improved to 3-5 in the major league opener, led by the knuckles from Morton (1-1), who pitched 6 2/3 innings.
Morton allowed three hits, walked four and struck out seven batters for the win.
In the attack Herrera hit a triple in the sixth episode and drove in a run.
Venezuelan closer Jeanmar Gómez (3) pitched an inning, allowed one hit and earned the save.
Dominican third baseman Maikel Franco did not make contact with the ball but also drove in a score.
The Padres lost to starter Robbie Erlin (1-1) in six innings, allowing three hits and one run.
Trevor Brown had a pair of home runs, Jeff Samardzija pitched eight strong innings and the San Francisco Giants beat the Colorado Rockies 7-2.
Hunter Pence also hit a two-run homer as San Francisco recorded its fourth victory in the last five games.
Brown, who started the game at catcher in place of the banged-up Buster Posey, hit a two-run homer off starter Tyler Chatwood (1-1) in the sixth. In the eighth, he repeated the dose to reliever Jason Gurka.
Never before in his career had Brown hit more than one homer in the same game. His four RBIs also represented the best mark as a professional.
Bryce Harper hit a two-out, two-run double to left field in the eighth inning as the Washington Nationals beat the Atlanta Braves 2-1.
It was Washington’s 12th straight win at home against the Braves.
Harper broke a scoreless tie by hitting left-handed reliever Eric O’Flaherty’s first pitch after right-hander Jim Johnson (0-2) allowed two runners to reach base.
Harper’s hit gave Blake Treinen (2-0) the win, who forced Jeff Francoeur with a groundout for a bases-loaded 6-4-3 double play that ended the eighth.
Both starting pitchers made their season debuts, with Atlanta’s Jhoulys Chacín called up early from Triple-A and Washington’s Gio González.
The two were dominant, covering six scoreless innings. Venezuelan Chacín allowed five singles and prescribed eight strikeouts, without conceding walks. González allowed three hits, gave a base on balls and fanned four rival batters.EFE

You can also read:  Puerto Rico is the great favorite against the Netherlands, who arrive without pressure