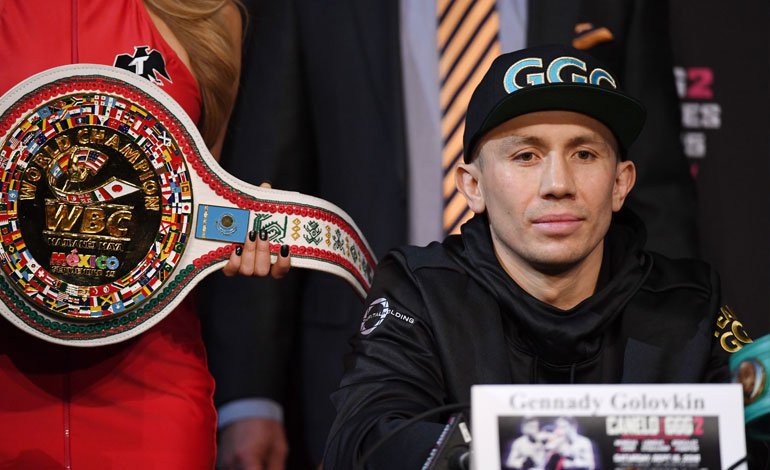 The huge banner hung right behind him revealed not just a new nickname, but a new reality in the boxing world for Gennady Golovkin.

“The return of the people’s champion,” he read, while promoting Golovkin’s fight on June 8 at Madison Square Garden, the Kazakh’s first fight since losing in his rematch against Mexican Saúl “Canelo” Álvarez.

Golovkin came out of those fights with a loss and a draw, and was left without just one of his three belts after 20 consecutive defenses of the middleweight world title – a record.

“Everyone on the Triple G team believes that he won those two fights, as did most of the fans and the media, and that is why we have called him ‘the people’s champion,'” promoter Tom Loeffler explained Monday.

You can also read:  Mikey Garcia named Boxer of the Month for winning lightweight title

He may still be considered a champion by the public, but boxing rankings indicate otherwise following the loss of Golovkin, who had long dominated 160 pounds, to Alvarez last September – the second clash between the two.

A lot has changed since that tight setback in Las Vegas, but not regarding the attitude of the 37-year-old Kazakh. Some might wonder if his ability in the ring has diminished after two tough fights with the Mexican, but not Golovkin.

And while he will step into the ring with no title to defend, he still shows the confidence of a champion.

“I don’t think I lost those two fights and those decisions don’t necessarily affect me, because deep down I feel like I won them,” Golovkin said. “So I don’t necessarily consider myself a challenger, as a rookie again.”

You can also read:  McGregor: wants to fight "Canelo" Álvarez

Golovkin (38-1-1, 34 knockouts) could soon get a chance to be a world champion again, perhaps even against Alvarez.

But first, he will have to face Steve Rolls, a little-known Canadian who is undefeated in 19 fights he has held at 160 and 168 pounds.

Both fighters will split the difference in weight for the fight scheduled for June, which will be at a maximum of 164 pounds. Rolls (19-0, 10 knockouts) was chosen in the hope that he will deliver a performance good enough that Golovkin has to push himself, but not so good that he thwarts plans for a third championship fight against “Canelo.”

You can also read:  “Muñeco” Gonzales makes his professional debut today in Mexico

“Make no mistake, this is not a preparation fight,” Rolls said. “I come to fight.” AP