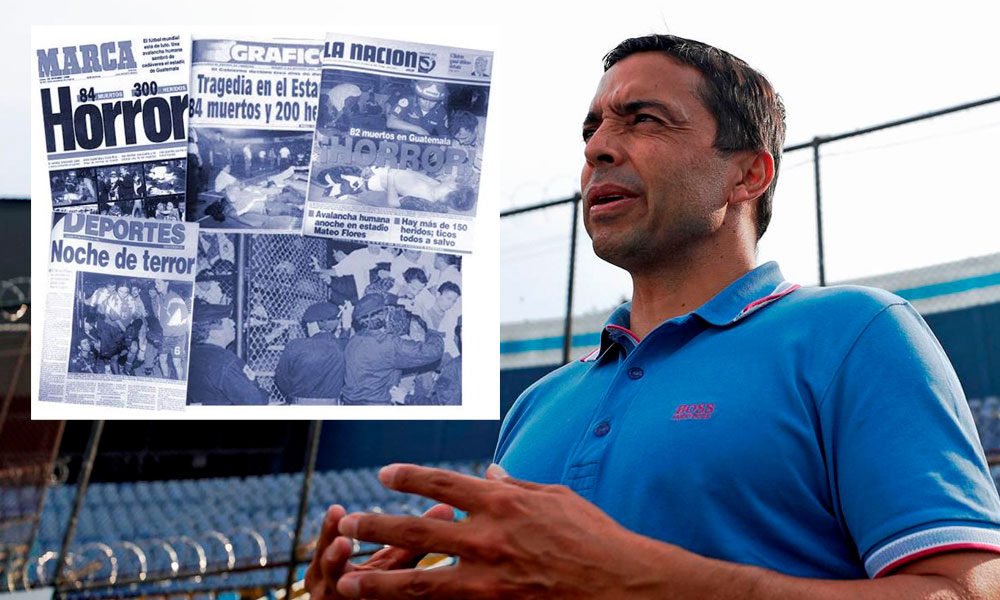 On October 16, 1996, almost a hundred people were crushed to death in Guatemala in a grandstand at the Doroteo Guamuch Flores stadium, in the lead up to a qualifying match against Costa Rica on the way to the 1998 World Cup in France.

A total of 83 deaths and more than 200 injured is the balance of a night that changed the joy and excitement of the illusion for a soccer game, to the greatest tragedy of sport in the Central American country. The covers of Guatemala after the tragedy.

The resale and more tickets authorized by the authorities caused some 20,000 more people to enter the stadium on a day like today but 25 years ago.

Former soccer player Martín Machón, international with Guatemala and former player of Santos, Atlas and Los Angeles Galaxy, remembers for the Efe Agency the fateful day inside the Doroteo Guamuch Flores stadium, a day that he constantly tries to block because it was “too sad” and that ” We hope it won’t happen again.

The team, which also included other figures such as Juan Carlos Plata or Édgar Estrada, had arrived two hours earlier and the stands were already full. ‘People were making the wave. It was a game that we felt was ours “, says Machón.

But at the end of the warm-up and waiting to be able to go out through the tunnel from the changing rooms to the field, «the doctor (of the national team) told us that something had happened, without further details and after ten minutes he returned to say that there was a dead ”, says Machón.

That changed the feeling, although the magnitude of the events was not known then. Until the doctor returned to the dressing room with the Argentine coach Horacio Cordero to tell the players that the game had been suspended because “a tragedy” had happened.

Then, uniformed and ready to play, “we went out through the tunnel, and we found bodies already on the athletic track. That moment was shocking because you heard people screaming, suffering, the relatives there, I even remember well that a child approached ‘Gato’ Estrada and ‘Chino’ Iván León because he could not find his father “, says Machón .

The dismayed soccer players, both Guatemalans and Costa Ricans, rolled up their sports jackets and began to help and receive hugs from the heartbroken.

Martín Machón, waiting to see what he was doing, with tears in his eyes, looked for his parents in the family box. He turned to look at that area while chaos grew on the runway and firefighters passed from one side to another, with injuries and bodies in a heap.

You can also read:  Too many penalties in Serie A? Referees under surveillance

That night, at 23 years old and as a rising star of the Communications midfield, he decided not to go home, but to sleep at his parents’ home.

«I never mentioned it and they had never asked me, but that night I went to sleep with my parents and chat and chat until I managed to get some sleep because I didn’t want to be alone, it was too shocking. And the next day it was waking up and not believing it and when you start to see the newspapers to have those images of what happened again, “he laments.

One of the fans who survived the tragedy, tells Efe that the lack of control was absurd. People began to be violent by the lack of organization and excess of tickets that were sold more than. He even says that a friend saw them and put them in line instead of him, who no longer managed to return.

It is the audiovisual producer Carlos del Valle, 41 years old, who remembers that he entered with his father “a little before the block of people who ended up in a caked, in the first 40 percent of spaces for that area. At one point I didn’t feel my feet on the ground and another when I began to walk on the people who were sitting, who had entered at the beginning and there was a lot of aggression ».

You can also read:  Rakitic, first official ambassador of the UEFA Foundation for Children

The inertia of the mass «took us in a disorderly way to the mesh where the running track is located, at ground level. We turned to the right, already with the mesh on our faces, almost. The tumult was upstairs and we finally sat down. So I was able to see the magnitude of the stadium, which I had never seen so full, “he adds.

From one moment to another, police and firefighters opened the screens that divide the stands of the field and “there it felt as if something had been released and a stream of expelled people came out. You could see people slumped. My mind knew there were dead but I didn’t want to believe it, until I saw them on the track and they began to cover them up, “he says.

Until then, when the bodies lying one on one side of the other accumulated and were covered with blankets, it was that the people in the stadium realized the tragedy that had reached them all, including a country that lived the last two months of a bloody internal armed conflict (1960-1996), with more than 250,000 victims, between massacres and forced disappearances, mostly attributed to the State.