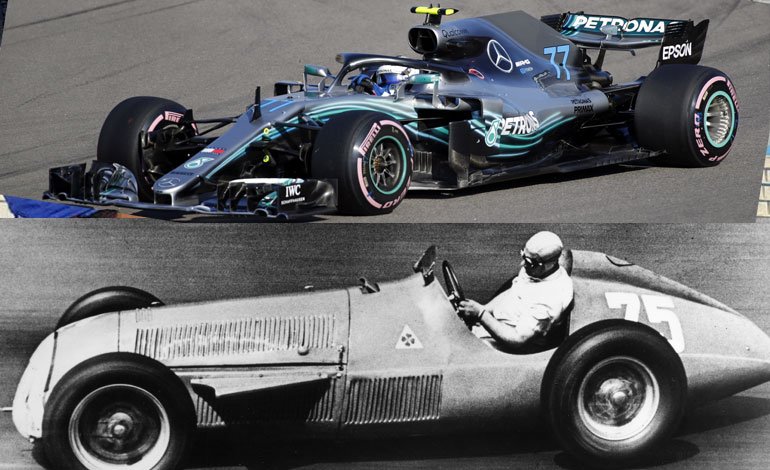 With his flashy jewelry, good fashion sense and the speed of his silver Mercedes, Lewis Hamilton rules Formula One with elegance.

The driver he chases in the record book was a bald and stocky former Argentine mechanic who by sheer force conquered five championships in a death-defying era.

More than 60 years after Juan Manuel Fangio dominated F1 in the 1950s, Hamilton is about to match his crop of titles in Mexico City. Only the German Michael Schumacher has more with seven.

The British rider arrives at the Autódromo Hermanos Rodríguez in Mexico City with deep respect for the first Latin American champion, perhaps the best of all time.

“He’s like the godfather of our sport,” said Hamilton.

Although separated by a gap of several decades, Fangio and Hamilton have something in common: their humble roots, far from the opulent world of F1.

Hamilton is the first and only F1 driver. He emerged from the go-kart circuit in Great Britain, with his father working three jobs to support him. Fangio was the son of Italian immigrants who settled in South America. He was 11 years old when he started working on automobiles as a mechanic and later opened his own workshop.

You can also read:  Belgian cyclist Bjorg Lambrecht dies after crash in Tour of Poland

Hamilton’s kart driving skills caught the interest of talent scouts in F1. Fangio raced everywhere, first on the gravel circuit, sometimes on mountainous routes that took several days and in which the drivers had to take care of their own repairs. His first race was with a Ford Model A that they loaned him.

Hamilton made his F1 debut when he was 22 years old and failed to be crowned champion by just one point. Fangio did not compete in Europe until he was 38 years old and joined F1 in its inaugural season in 1950. The Argentine won the title in 1951 and then dominated with four titles in a row between 1954-57 – a streak that followed injury. neck that suffered in a collision in 1952 that nearly cost him his life.

When they talk to him about Fangio, Hamilton expresses astonishment at the risks that prevailed in the Argentine era. There was nothing like the protections that now have in the cabs of their cars.

Hamilton says he’s driven a few laps in a Fangio-era vehicle, and was impressed by the courage it took to just hit the gas. The pilots wore bare-faced helmets, short sleeves, and gloves. There were no fireproof suits.

You can also read:  Citroen will not be in the 2016 World Rally Championship

“It is always strange to hear the mental philosophy of the pilots of that era. Sir Stirling (Moss) said that you would want to jump out of the car if it was going to crash, that you expected to be thrown out of the car, “said Hamilton. “We have a much more closed space. It’s about getting stuck and being safe. “

Moss, who raced alongside Fangio in Mercedes, retired from public life earlier this year. But he always admired Fangio’s talent in cars that could be walking graves.

“It was the biggest of all,” Moss said in a 2007 interview with Motorsport. “I mean taking a 145mph corner on a wet track, knowing that if you go off, you are most likely going to die. Or you would go back to the pits with the wheel in hand to ask for another car ”.

“But we were all aware of the danger: I was a pilot because to a certain extent it was dangerous,” Moss added.

Fangio won titles with Alfa Romeo, Ferrari and Maserati, and twice with Mercedes. That is another aspect that Fangio shares with Hamilton: success in choosing the ideal model. Hamilton won his first title with McLaren in 2008, passed to Mercedes in 2013, a year before F1 made the switch to the hybrid V6 engine. The German builder has dominated ever since.

You can also read:  Bottas stays with the 'pole' of the GP of Brazil

“(Fangio) was always very alert,” said Mario Andretti, the 1978 F1 champion who befriended Fangio before his death in 1995. “He always looked for a brand-name team when they were in their prime.”

Fangio was also an innovative rider, the pioneer of the controlled four-wheel drift for reckless cornering.

“Fangio would be champion today,” Andretti said. “The human factor does not change, only the team. He had something special. “

Fernando Alonso, the two-time F1 champion who has raced against Hamilton since 2017 puts Fangio and Hamilton in his Top 5 of the best drivers in history. He knew that Hamilton was a special one in the first race he played against him.

“Lewis wasted talent from day one, fighting for the title in his rookie year and then winning the title in 2008,” said Spanish Alonso, in his final year in the top flight. “He was able to win a race in a competitive car, but he also won races in seasons when his car was not at its best. Is awesome”. AP