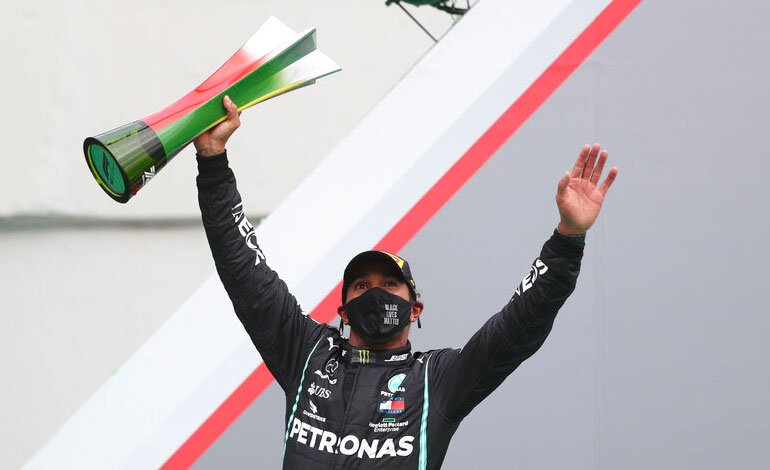 The British Lewis Hamilton (Mercedes), six-time world champion, achieved victory in the twelfth round of the Formula 1 World Championship this Sunday at the Algarve International Autodrome and surpassed, with 92, the record of victories in the queen category of the German Michael Schumacher.

Hamilton’s historic 92nd victory, which extended his lead over teammate Valttery Bottas (second), who he left more than 25 seconds behind, brings him a little closer to a title he has almost in his pocket.

The Spanish Carlos Sainz (McLaren) led four laps of the Portuguese Grand Prix, the twelfth round of the Formula 1 World Championship, despite having started from seventh on the starting grid.

Sainz finished sixth ahead of Mexican Sergio ‘Checo’ Pérez (Racing Point), who had problems at the beginning and end of the race and, in between, signed a great comeback.

The appointment of Portimao had a first few meters of vertigo. Valtteri Bottas (Mercedes), who started second, gave up a position with Max Verstappen (Red Bull), but recovered it almost immediately, and the Dutchman had a touch with ‘Checo’ Pérez, who spun and got behind the group.

You can also read:  VIDEO.- The worst falls on a motorcycle

At the top positions, with a few drops of rain on the circuit, the Alfa Romeo of Raikkonen, which started from sixteenth place, appeared, in an electric start.

Bottas recovered in seconds, also overtaking Hamilton and was in front of the race, but on the second lap Carlos Sainz overtook the two Mercedes.

The McLaren man looked at the rest in the rear-view mirror until lap six, when he began to lose positions once Bottas and Hamilton’s medium tires warmed up.

The race, which the teams faced with the strategy of going to a stop, returned to normal, with Mercedes at the fore. Although few overtaking was foreseen due to the difficulty of the Portimao track, in practice they were a constant.

As in practice, some drivers received warnings and also penalties for exceeding the limits of the track. It took Stroll five seconds that were added to another identical punishment for trying an outside in turn one, desperately, to try to pass Lando Norris (McLaren), movement in which, in addition, he suffered damage to the wing. Finally, he retired after 54 spins.

You can also read:  Stoner pulverizes all times and wins the Aragón GP

Hamilton overtook Bottas on lap 19 and passed him on the home straight, in which the Finn went to the dirty part and made the maneuver easier for his teammate.

From behind, Checo Pérez recovered, little by little, positions with a spectacular comeback after the incident on the first lap.

Sainz took the pit lane on the twenty-seventh turn and came out with medium compound, in fourteenth place and with traffic on the track.

The Monegasque Charles Leclerc (Ferrari) confirmed that the improvements of the Italian brand have taken effect, while the winner of the Italian Grand Prix, the Frenchman Pierre Gasly (Alpha Tauri) stretched the softs as the most and did not stop until the lap 29, when he was fourth. The Ferrari held until 35 and was hard. He came out from behind Verstappen.

You can also read:  Lewis Hamilton stayed with the Italian GP

With the Mercedes doubling drivers, Sainz had a nice duel with Raikonnen and, in more advanced positions, Checo took fifth at the expense of Frenchman Esteban Ocon (Renault), who was the last to change tires (lap 55).

The German team opted for the conservative logic because of the advantage they had. Hamilton entered the pits first (lap 41) and then Bottas, who doubled Sainz and not Gasly before his stop and that hurt the Spaniard.

With soft, Ocón tried to go for Sainz and this, in turn, for Gasly. Then Pérez’s problems began. The man from Guadalajara defended himself aggressively against the Frenchman and was investigated by race management. Irremediably, he lost his position on the track to the attacks of Alpha Tauri, and Sainz also passed him on the last lap to relegate him to seventh place.

The next race will be in seven days at the Autodromo Enzo and Dino Ferrari in Imola (Italy) with the Emilia-Romagna GP at stake. EFE (HN).