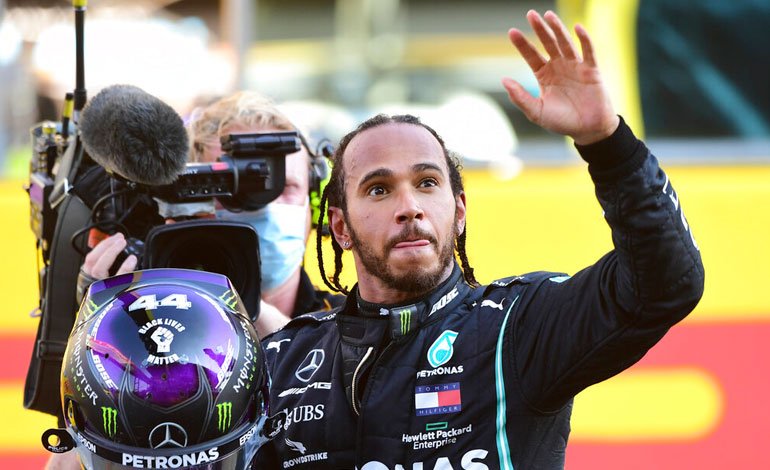 Lewis Hamilton was more calculating amid the chaos provided by an unfamiliar circuit as he prevailed in a rugged Tuscan Grand Prix to claim the 90th victory of his sensational career.

The British driver was one additional triumph away from equaling Michael Schumacher’s record. He is also closer to emulating the legendary German’s record of seven world championships.

“My heart is racing,” said Hamilton. “It’s crazy to find myself here with 90 (wins of) grand prix.”

The first Formula One race at the Mugello circuit, with very fast corners and which is usually the scene of MotoGP competitions, was fraught with shocks. Two collisions in the first seven laps led to the abandonment of six drivers, and a red flag caused the suspension of the race.

A second red flag near the end, following a nasty crash from Lance Stroll, prompted another restart – on lap 46 of 59 – and gave Valtteri Bottas another chance to catch up with leader Hamilton.

You can also read:  Vettel thinks about his future after F1 in a weak start to the season

“With all the restarts, you had to be really focused,” said Hamilton. “It has suffered a lot.”

Hamilton responded firmly and Daniel Ricciardo’s Renault passed Bottas, who ended up lagging further behind his Mercedes teammate in the title fight.

“It was a bit amazing. Like three races in one day, just really tough, ”said a relieved Hamilton. “This circuit is phenomenal and containing Valtteri was not easy.”

Bottas insisted to get within 1.1 seconds of Hamilton on the penultimate lap, but the British driver timed the fastest lap on the last lap to pocket the bonus point.

“So is this. I will have to keep trying to improve, ”said Bottas. “Eventually things will work out for me.”

Red Bull’s Alexander Albon picked up his pace to clinch the first podium of his career, a result that underpins his chances of staying with the team alongside leader Verstappen next year.

You can also read:  Lorenzo: "I think Iannone will have learned his lesson and it will be enough"

Hamilton consolidated himself at the top of the drivers’ standings by reaching 190 points, 55 more than Bottas and 80 over Verstappen.

Hamilton could match Schumacher’s record for victories at the Russian Grand Prix in Sochi within two weeks.

This race required the maximum effort of Hamilton, who looked out of breath when he emerged from his car after crossing the finish line.

He started from pole for the 95th time, extending his record, but was overtaken by a good move from Bottas.

“It was a dream start,” said Bottas, who was unable to capitalize on the collisions that were to occur.

You can also read:  Nico Rosberg takes the "pole" in GP of Mexico

Verstappen started third, but the Dutchman and Frenchman Pierre Gasly collided shortly after, causing the safety car to enter on the first lap.

Verstappen’s Red Bull was brushed against by Raikkonen’s Alfa Romeo after lagging behind due to engine problems. Carlos Sainz Jr. managed to avoid being rammed when his McLaren spun in the middle of the track and the others had to avoid him.

After the safety car exited, the zigzag of Bottas’s car piled up the rest.

The case broke out when Antonio Giovinazzi’s Alfa Romeo collided with Kevin Magnussen’s Haas and Nicholas Latifi’s Williams, with Sainz slamming into the rear of Giovinazzi. No one was hurt, but several stayed from the pointers’ tactics.

“Do they want to kill us or what?” Asked Frenchman Romain Grosjean, who narrowly avoided a collision. “It’s the worst I’ve ever seen.” AP (HN).