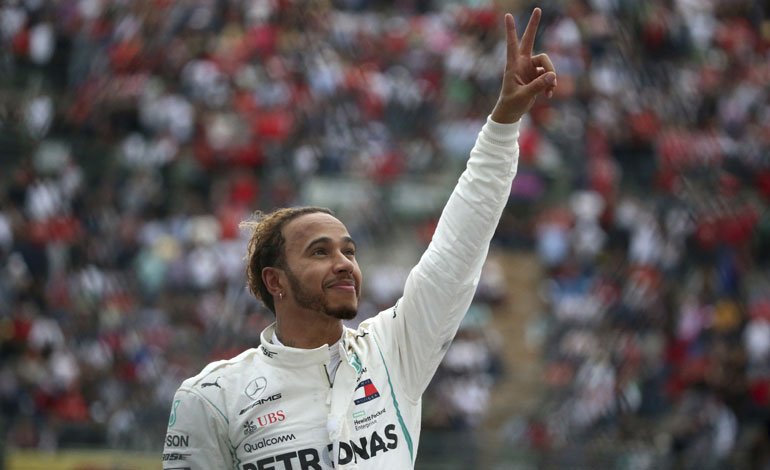 The British Lewis Hamilto, who will be crowned for the sixth time, like his team, Mercedes, in Abu Dhabi, will seek to put the finishing touch to another sensational season starting from pole this Sunday in the last Grand Prix of the World Championship. Formula One, which takes place at the Yas Marina circuit.

The 34-year-old Hamilton raised his own all-time Formula One pole record to 88 by dominating the qualifying session, in which, on his best lap, he covered the 5,554 meters of the Emirati track in one minute, 34 seconds. and 779 thousandths, 194 less than his teammate, the Finn Valtteri Bottas.

Bottas changed the engine of his Mercedes twice this weekend, he will penalize and will start from the back of the grid, so it will be the Dutchman Max Verstappen (Red Bull) who does it from the front row along with Hamilton, who signed his fifth pole of the season on the Emirati night. In which the Spanish Carlos Sainz (McLaren) will aim for the final sixth place in the championship from eighth place on the grid.

The spectacular and eccentric Stevenage champion celebrates, after the one he scored in 2008 with McLaren, his sixth title, the fifth of the last six years with Mercedes. Team that also celebrates the achievement of its sixth World Cup followed by constructors and the second place that Bottas has mathematically assured.

In this way, in Yas Marina the final third place of the World Cup will be decided this Sunday, which will be played by Verstappen and the Monegasque Charles Leclerc (Ferrari) -also 22 years old- with eleven points of advantage (260-249) in favor of the Dutch .

You can also read:  Pastor Maldonado announces that he will not race in the 2016 season

Leclerc will start third, from the second row, alongside his German teammate Sebastian Vettel – four-time world champion between 2010 and 2013, with Red Bull – who arrived a day after the rest at Yas Marina, due to his recent third paternity; and that, like the rest of the contenders, advances one place on the grid thanks to the Bottas penalty.

‘Mad Max’ had dominated hours before qualifying the (inconsequential) third and last free practice, in which he relegated to second and third place the two Mercedes of Hamilton and Bottas. The Ferraris of Vettel and Leclerc – fifth and sixth in the timesheets – were the only ones to set their best lap on a medium tire instead of the soft one.

Hamilton signed his ‘pole’ after setting the best time in the three rounds of the main timed session. The first figure to fall, in Q1, was the Finn Kimi Raikkonen, the last to win a title for Ferrari (in 2007) and who will complete his first year at Alfa Romeo.

In the second round (Q2), in which the Mexican Sergio Pérez (Racing Point) was eliminated -with the eleventh time, but will start tenth-, Leclerc, the two Mercedes and the two Red Bulls of Verstappen and the Thai Alexander Albon They placed the average compound with which they will face the exit; that the rest of the top ten, including Vettel, will take with the soft.

You can also read:  Mick Schumacher continues his apprenticeship with Alfa Romeo Racing

With the exception of ‘Checo’, who did not enter Q3, but comes out tenth. The brave pilot from Guadalajara aspires to maintain the final tenth place in the World Cup, which he occupies with 46 points, one more than the English debutant Lando Norris, Sainz’s teammate, who this Saturday surpassed him and closed the tight balance of clashes in his favor in qualification (11-10).

Carlos, who rode with the engine released two weeks ago in Brazil, where he inaugurated his podium record in F1 by finishing third at Interlagos, had bad luck in a qualifying that he was embroidering until he found himself with a lot of traffic in the good attempt of Q3, in which he did not improve the time of Q2 -the sixth-, which would have meant the seventh final time.

The talented driver from Madrid signed in ninth, but will start eighth, from the fourth row, alongside Australian Daniel Ricciardo (Renault); and behind the Thai Alexander Albon (Red Bull) and Norris, who will do it from the third.

Sainz will start ahead of his former German teammate Nico Hülkenberg (Renault), who will not continue in F1 next year; and Pérez. But ‘Checo’, like the French Pierre Gasly -released to Toro Rosso from Red Bull and who is sixth in the World Cup, with the same points (95) as the Spanish- will come out with means, unlike Sainz, who leaves with soft. So the degradation of the tires in the first laps could be crucial.

You can also read:  The salaries that F1 drivers earn are insane!

For Carlos it is enough to add and surpass Gasly to finish sixth, except that Albon, eighth in the World Cup, traces the eleven points that both take him.

Yas Marina, where Mercedes took the hammer again, at the end of a campaign in which it marked a historic milestone – winning the two World Cups six times in a row, the drivers ‘and the constructors’ World Cups – had a great Spanish atmosphere this Saturday.

This Saturday was in the circuit of the capital of the United Arab Emirates, the King Emeritus of Spain, Don Juan Carlos, a great sports fan and almost a regular at this Grand Prix, who chatted with Sainz in the ‘paddock’.

Don Juan Carlos was also able to greet, among others, the double Asturian F1 world champion Fernando Alonso, present in his capacity as McLaren ambassador; and the other great star of Spanish motorsports, Carlos Sainz Sr. -double world rally champion-, happy for that first podium and that he told Efe that his son “seeks the maximum” and that he can give “many more joys” to the fans Spanish. EFE