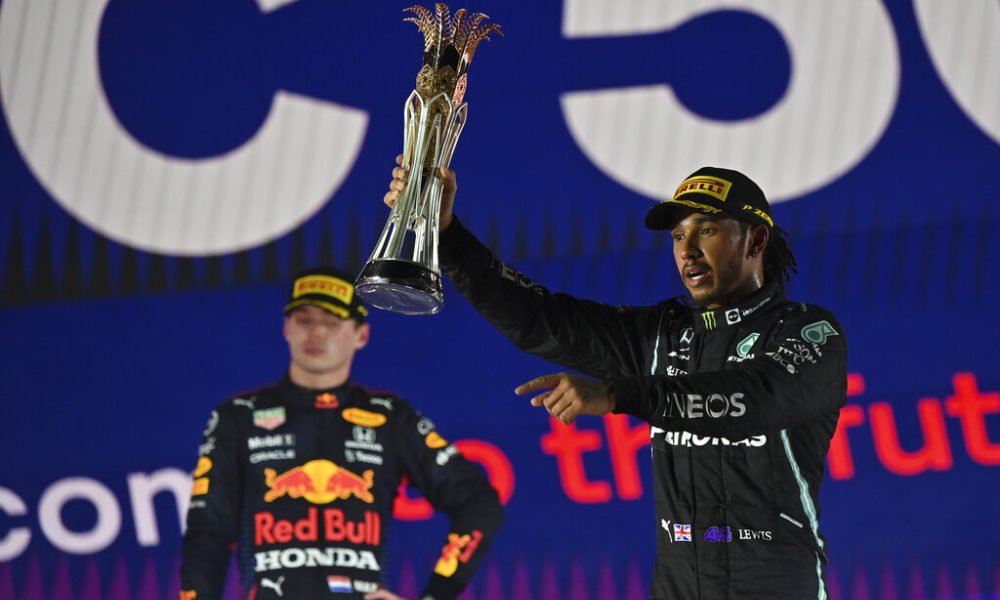 The British Lewis Hamilton (Mercedes) won this Sunday in a chaotic Saudi Arabian Grand Prix ahead of the Dutchman Max Verstappen (Red Bull) and both drivers arrive equal on points in the last race of the Formula 1 season, within a week in Abu Dhabi.

The young Dutchman, 24 years old, and the seven-time world champion, 36, arrive at the last race tied on 369.5 points in what is the most exciting Formula 1 World Championship in recent years.

For Hamilton, who added the additional point of the fastest lap in the race, it would be an 8th title and would surpass the historical record that he shares with the German Michael Schumacher.

For Verstappen it would be his first world championship and he has a small advantage having won more races than his rival (9 by 8): if neither of them scores, the title will go to the Red Bull driver.

The Finn Valtteri Bottas (Mercedes) completed the podium of the first Grand Prix held in Saudi Arabia, on a very fast and very dangerous urban circuit in Jeddah, the scene of multiple incidents, with three starts, two red flags and a final touch between the two contenders for the world title.

You can also read:  Alonso: "There have been real signs of progress"

Verstappen, who was leading the world championship and with a chance of winning the title in Jeddah, was sanctioned with a five-second penalty for a braking maneuver that surprised Hamilton and that the race stewards interpreted as irregular.

«There was everything, many things happened with which I do not entirely agree, but it is what it is. I slowed down, I wanted to let him pass, he was on the right but he didn’t want to overtake and we touched. I don’t really understand what happened there, ”said Verstappen after the race, who, visibly upset, left the podium before the awards ceremony ended.

“I’ve been racing for a long time… but this was incredibly tough!” Hamilton summed up.

“I tried to be as tough and sensible as I could, with all my experience over the years… It was very difficult, but we persevered as a team,” he added.

You can also read:  Pirelli will be F1's new tire supplier

Hamilton, who started from pole, held the lead until lap 13, when the race was interrupted for the first time by an accident involving Mick Schumacher (Haas).

Upon resuming, Hamilton tried to overtake Verstappen and the Dutchman ran off the track to maintain his position, while behind the Mexican Sergio Pérez (Red Bull), the Russian Nikita Mazepin (Haas) and the British George Russell (Williams) touched. , forcing the race stewards to raise the red flag again.

The stewards considered Verstappen’s maneuver illegal and it was Frenchman Esteban Ocon who started from first place in the third start, with Hamilton second and the Dutchman third.

However, Vertappen was back in the lead at the first corner and Hamilton passed Ocon.

You can also read:  Hamilton, the fastest in the second tests of the GP of Europe

In an exciting heads-up match, the Englishman tried to overtake Verstappen, who crossed his rival’s path to avoid him, for which he was ordered to return the position to Hamilton.

And then came the controversial moment of the race: Verstappen slammed on the brakes to let Hamilton pass, but Hamilton was surprised by the maneuver and crashed into the Red Bull and damaged his front wing.

The Dutchman was again ordered to let Hamilton pass and did so, but immediately overtook his rival again.

One lap later, Hamilton took the lead again and Verstappen, with the five-second penalty, was no longer in contention for victory.