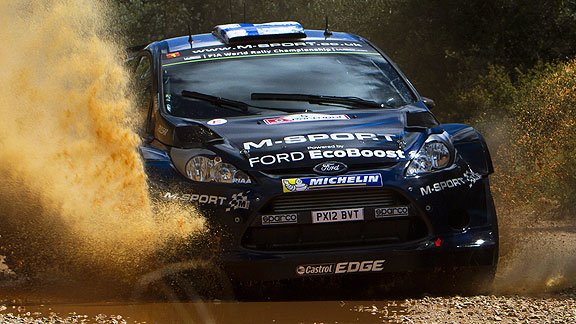 Finn Mikko Hirvonen (Ford Fiesta RS WRC) leads Rally Portugal, the fourth round of the World Championship, once the second day is over, after which Spaniard Dani Sordo (Hyundai i20 WRC) occupies fifth place after being provisional leader with two partial victories. Hirvonen took the lead in the rally on the last stage of the day, in which he wrested command from current champion and event leader, Frenchman Sebastien Ogier (Volkswagen Polo R WRC).
Thanks to his attack in the seventh stage of the race – sixth of the second day -, the Finn took the lead with 3.7 seconds of margin over the Estonian Ott Tanak (Ford Fiesta RS WRC) and 6.5 compared to Ogier, who occupies the third put after having been in the lead since the third stage of the day.
After being absent from the rallies in Sweden and Mexico, Sordo returns to the championship in Portugal. Today he posted the fastest time on the first two second-day stages, Huyndai’s first partial wins in his year back at the tournament.
Those two wins gave Sordo the provisional lead after the third stage of the rally, but he handed it over to Ogier in the next round.
Sordo finished the day 25.7 seconds behind the race leader, just one tenth behind the quarter, Norwegian Mads Ostberg (Citroen DS3 WRC), who snatched a place from him at the last minute, and just ahead of his teammate, the Belgian Thierry Neuville.
Ogier, a three-time winner of this rally – the last one last year – took first place until in the last stage he had to give in to the push of Hirvonen and even of Tanak, who was in the wake of Ford’s Finn.
On Saturday the third day is disputed, with another six specials, the last of them at 17.05 local (18.05 CET / 16.05 GMT).
– Classification after the second day:
.one. Mikko Hirvonen (FIN / Ford Fiesta RS WRC) 1h.25: 05.6
.two. Ott Tanak (EST / Ford Fiesta RS WRC) at 3.7
.3. Sebastien Ogier (FRA / Volkswagen Polo R WRC) at 6.5
.4. Mads Ostberg (NOR / Citroen DS3 WRC) at 25.6
.5. Dani Sordo (ESP / Hyundai i20 WRC) at 25.7
.6. Thierry Neuville (BEL / Hyundai i20 WRC) at 42.0
.7. Henning Solberg (NOR // Ford Fiesta RS WRC) at 1: 42.3
.8. Juho Hänninen (FIN / Hyundai i20 WRC) at 1: 58.2
.9. Andreas Mikkelsen (NOR / Volkswagen Polo R WRC) at 2: 16.2
10. Martin Prokop (CZE / Ford Fiesta RS WRC) at 2: 59.2 ERA

You can also read:  Bernie Ecclestone doesn't think Lewis Hamilton will race in 2022