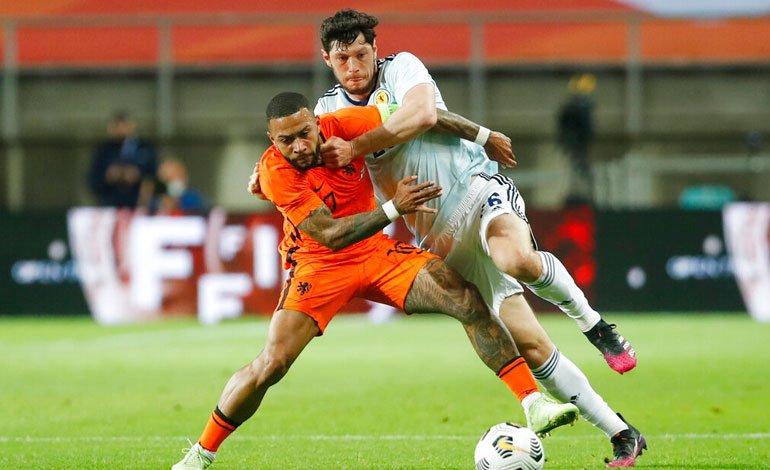 The Netherlands struggled to a draw (2-2), against a Scotland plagued by casualties, in a friendly in which Frank de Boer’s side made several unforgivable mistakes behind and missed Virgil van Dijk.

The Liverpool center-back watched the successive mistakes made by the Dutch defense from the stands. The coach Frank de Boer will have to polish it to the maximum in the next week and a half to avoid making a fool of himself in the European Championship. The “Clockwork Orange” was saved from embarrassment thanks to two goals from Memphis Depay, the second just before the final whistle.

De Boer introduced a couple of surprises into the starting eleven, bringing in striker Wout Weghorst, who has only worn the orange shirt four times, and debuting debutant defender Jurrien Timber. Likewise, he opted for a 5-3-2, drawing that he has hardly used in the last year.

Under the sticks was Tim Krul, Norwich City goalkeeper who disputes with Maarten Stekelenburg the ownership for the European Championship. Valencia goalkeeper Jasper Cillessen is not in that duel, ruled out for the continental tournament due to his contagion by covid-19.

Frenkie de Jong and Georginio Wijnaldum only played the first half hour of the game, changes that the coach warned about before the game in order not to overload them. When the “Clockwork Orange” attacked, De Jong stayed a few meters behind to safeguard position, a more defensive role than he usually displayed at the Camp Nou.

Scotland, for its part, appeared in the friendly without five of its usual men, -Marshall, O’Donnell, Hanley, McGinn and Adams-, who stayed in Alicante, the city where the team is concentrated for the European Championship.

Steve Clarke drew a 4-3-3 on the pitch, gave Celtic midfielder David Turnbull his debut and left Manchester United’s Scott McTominay and Chelsea’s Billy Gilmour on the bench, as both played last week in the final of the Europa League and the Champions League respectively

Scotland’s first goal was due to a resounding error by the Netherlands on a goal kick. Krul served short and the pressure from the forwards forced Matthijs de Ligt to get the ball off him with a long pass that Depay could not control. The ball fell into Hendry’s boots and the Celtic striker, with a low shot, beat Krul.

De Boer was desperate from the band, who could not explain the failure of his. It was not the only time that the “Oranje” had problems when it came to leaving with the ball played. The advanced lines of the Scottish attackers, added to the inaccuracy of the defense, made the second lose several balls.

You can also read:  Benfica sinks Barcelona and sentences Koeman

Fortunately for the Dutch coach, the reaction of his men was almost instantaneous. Six minutes after the Scottish goal, Georginio Wijnaldum broke the Scottish defensive line wide and headed back an aerial pass. Depay, from the edge of the area, did not let it bounce and finished off with a volley with his left foot to the base of the post, in a beautiful execution that added the tables to the scoreboard.

The second half started like the first, with the Netherlands dominating possession of the ball but without creating any dangerous chances. After 60 minutes, Clarke introduced a triple change with which he hit full.

The origin of Scotland’s second goal was in a counterattack. Andy Robertson sped down the left flank and put the ball into the box where De Roon or De Ligt should have been. In his place was center forward Kevin Nisbet, who hadn’t been on the pitch for even two minutes, and scored at will.

The goal served for the “Oranje” to take out the claws. First it was a shot from Depay, then another from Quincy Promes and then another from Van Aanholt that forced goalkeeper Gordon to put in a good hand. Sevilla player Luuk de Jong entered for the last five minutes, although he did not win a prize.

You can also read:  America remains dominant in Mexican soccer

When it seemed that the meeting was resolved, Depay did another of his. Scotland caused an unnecessary foul on the edge of the area and the Olimpique de Lyon striker took charge of the free kick with a good thread shot to the side where Gordon was, but the goalkeeper made the statue. The 2-2 went up on the scoreboard and avoided the embarrassment of the Netherlands, which will have to hurry to correct their mistakes before the start of the European Championship.