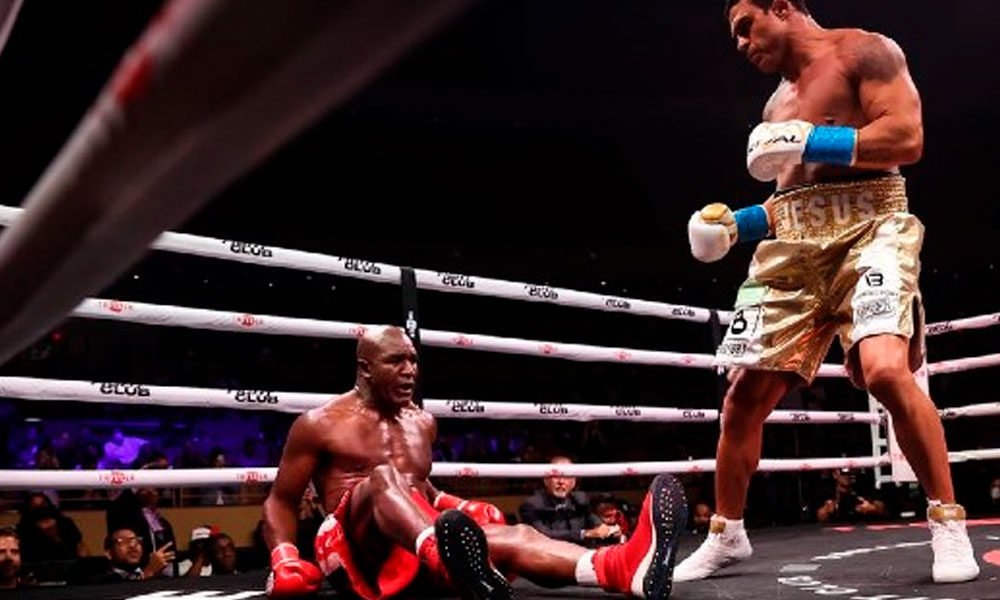 At 58, former world heavyweight champion Evander Holyfield fell by TKO in the first round of his bout to mixed martial arts star Vitor Belfort.

With former US President Donald Trump serving as a commentator at the Seminole Hard Rock casino in Hollywood, Florida, Belfort unleashed an initial flurry of blows that ended with Holyfield slipping between the ropes.

The legendary American fighter rebuilt, but was later sent to the canvas by another Belfort combination.

Holyfield beat the count but after receiving another blast without managing to connect any, the referee stopped the fight despite the American’s claims.

😢🔥 There was no need for this. Vitor Belfort smashes 58-year-old Evander Holyfield. #HolyfieldBelfort #andersonsilva pic.twitter.com/XuNqMKavbl

“He was not hurt,” Holyfield insisted, calling the decision to stop the fight “somewhat sad.”

You can also read:  Mayweather ran off Pacquiao

Holyfield was fighting for the first time since defeating Brian Nielsen in 2011 to cap off a glorious ring career. Holyfield fell to the canvas twice, before the MMA fighter.

The American won Olympic gold in 1984 as a light heavyweight and went on to dominate the professional cruiserweight division.

Holyfield is best remembered for his career as a heavyweight champion, which included two victories over Mike Tyson, one of them the infamous “Bite Fight,” a victory over George Foreman and another over Riddick Bowe. Evander Holyfield fell by TKO in the first round to Vitor Belfort.

You can also read:  Pacquiao promises to recover money looted by the Marcos if he is president

The former champion assured that he was ready, having been preparing a comeback match against Kevin McBride that did not take place. When asked after the fight if he was still interested in a rematch with Tyson, Holyfield replied, “Of course.”

Even Donald Trump, who did not stop encouraging Holyfield in his comments, seemed surprised by the former champion’s performance.

“No, it is not the same,” he said. «From the beginning he was not the same boxer. He lost a lot. It wasn’t Evander Holyfield. former US President Donald Trump serving as a commentator.

The former president was enthusiastically received by fans of the Florida venue, where he arrived after visiting New York on the twentieth anniversary of the attacks of September 11, 2001.

Trump is no stranger to the world of boxing, as he has hosted large fights in his hotels and casinos, which has earned him a place in the Hall of Fame of that sportsman in New Jersey.

His comments for the undercard prepared by Triller – the music video app that is trying to get into boxing with its streaming platform Triller Fight Club – included memories of fights and fighters from the past along with random observations about the sport.

“It’s like the election, it can also be rigged,” Trump said of some questionable fight results he has seen in the past.

In another match, mixed martial arts giants Anderson Silva and Tito Ortiz – both 46 years old – brought their talents to the boxing ring with Silva scoring a brutal knockout in the first round.

Ortiz paid the price for an aggressive start when a counter from Silva sent him to the canvas for the count.

“This fight seemed incredible to me, although it was very short,” Trump said.