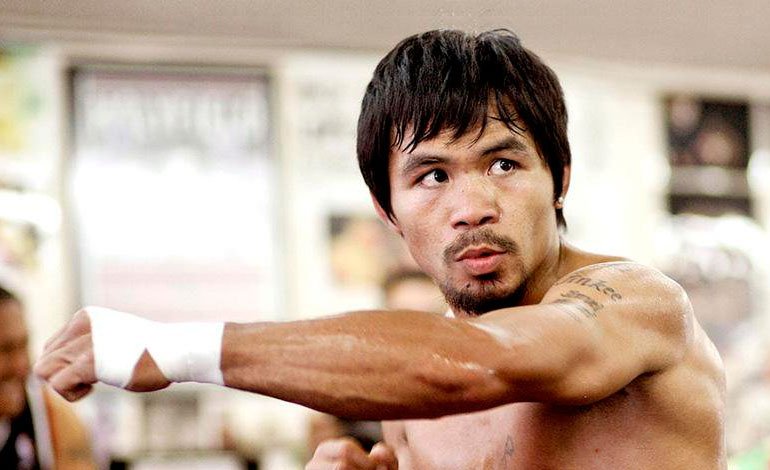 On July 20, the 40-year-old will enter the ring for the 71st time when he faces American Keith Thurman at the MGM Grand in Las Vegas seeking the World Boxing Association (WBA) welterweight title.

To prepare for a fight against an opponent who has already assured that he wants to retire, the veteran superstar works with the formula that has given him such good results in the past.

Pacquiao wakes up at dawn each day in the multi-million dollar mansion he has owned in Los Angeles for a decade.

If you have sparring scheduled for later, you embark on a light workout in the morning, running through a park two miles from your house doing cardio and muscle workouts.

When he is not sparring during the day, he heads to Griffith Park for a more demanding workout on the high slopes of the hills, where he can admire the panorama of the Californian metropolis.

Along with a score of training partners, security members, fans and friends, the stamp perfectly illustrates his rise to sporting Olympus.

In a recent practice, a crowd of nearly 100, many from the wider Los Angeles Filipino community, watches as the champion of eight different divisions performs squats and crunches, occasionally stopping to check his cell phone.

When he’s done, he heads home, which, at first glance, has a vague air of organized chaos.

You can also read:  Tamers of Cuba beats Dragons of China

For most of the day, dozens of “Team Pacquiao” members are housed in this luxurious five-bedroom, nearly 400 m2 mansion, decorated with portraits of his family and photos of his most iconic victories.

His routine is notable for being unusual in the world of boxing, in which most fighters prefer to seclude themselves in training grounds away from prying eyes.

Pacquiao assures that he is simply a sociable person. The presence of others energizes you.

“I want to have people around me, so I feel motivated,” he tells AFP over white rice, broth and grilled meat prepared by Filipino cooks for breakfast.

“I feel like I don’t want anyone to see me being lazy. I want to impress them every day. I love it, as long as they don’t distract me or affect my training, “he adds.

Some of his most loyal confidants, however, have mixed feelings about the host of extras who have jumped on his bandwagon.

«Many want to support him. Many others want to be on television, “explains his trainer Freddie Roach.

But, in his case, it works. He knows how to get in shape and he does it very, very well. “

Roach admits worried that keeping his entourage could drain his fortune, estimated at about $ 200 million.

“I would bet that Manny does not know the names of at least 50% of the people who are in this house right now,” said Roach in an interview with AFP.

You can also read:  Boxers on prep tour

Manny is a great guy. He likes to help people. I always tell him that’s why he might be ruined when he retires. Because it gives everything. It is simply too generous.

That generosity seems to know no limits, be it buying land and houses for a thousand poor families in the Philippines or paying for flights to his entourage around the world.

And it is that Pacquiao will receive a bag of 20 million for the fight with Thurman and another of 10 million for his victory in January against Adrien Broner.

But everyone wonders how much longer the one with a record of 61 wins (39 knockouts), 7 losses and two draws will be able to continue putting his body into play after such a long career.

The Filipino already retired once, in 2016. But his return came just seven months later.

«Boxing is my passion. It’s really hard to stop and hang up your gloves when you know you can keep fighting. My mind is very active, 100% focused and I want to continue my career. Although, on some occasions, I have to listen to my body, “he acknowledges to AFP.

Roach believes that Pacquiao, a member of the Senate in the Philippines, wishes to extend his career until at least 2022, coinciding with the elections for the presidency of his country.

You can also read:  "Scorpion" Ruiz returned to finish preparation

“He wants to be the first person to be president and world champion at the same time. I think he will continue until he tries, ”says his coach.

His own age and the youth of his rivals could jeopardize that goal.

Veteran promoter Bob Arum recently raised his voice in acknowledgment of concern that Pacquiao would seriously jeopardize his health by fighting in his 40s.

“He worries about me. I understand what it says. But I’m not the only one who has fought at this age. George Foreman and others did it when they were 47 or even 50. I am not saying that at those ages he continues to box. No. But it depends on how disciplined you are and how hard you work.

Working hard has never been a problem for him.

He’s a gym rat. It never gains weight. His metabolism must be out of the ordinary, ”says his fitness trainer Justin Fortune.

Pacquiao, a fervent Catholic, is “a little upset” by Thurman’s comments, who said he wants to “crucify” him in the ring in his next fight.

“That helps. He wants to earn a little more than usual, “says Roach. afp