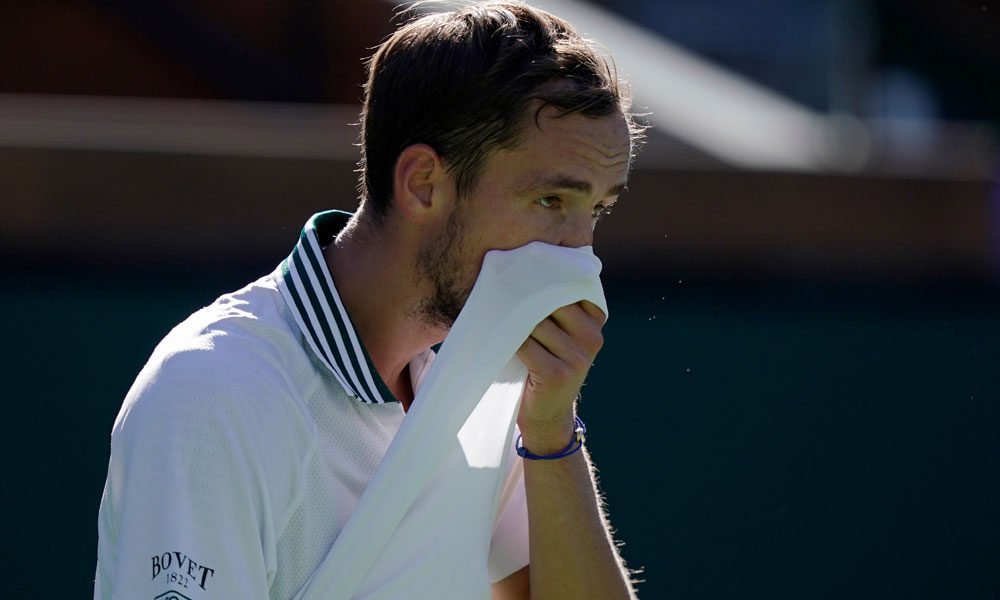 Russian tennis player Daniil Medvedev, a new winner of the recent US Open, was eliminated in the round of 16 at the Indian Wells Masters 1000 on Wednesday after suffering a spectacular comeback from Bulgarian Grigor Dimitrov.

Medvedev, the top seed of the tournament, took the first set emphatically and dominated the second 4-1 when he conceded an unusual eight games in a row from which he could not recover.

“I do not remember losing service four games in a row on hard court, that speaks of how slow this court is,” Medvedev told the press video conference about the conditions in the desert Indian Wells (California).

The Russian was the big favorite of the tournament in the absence of world number one Novak Djokovic, whom Medvedev beat in September in the US Open final, preventing him from completing a full Grand Slam title in 2021.

You can also read:  Barty wins his first title in Kuala Lumpur

“It’s not the end of the world. Losing like that in a Grand Slam would have been difficult to digest, but tennis has many factors and I don’t think this would have happened in a Grand Slam, “said a serene Medvedev. And Grigor played very well. The second part of the game he did better than any of my rivals at the US Open.

Dimitrov, whose eighth and last ATP trophy dates from 2017, will face in the quarterfinals Hubert Hurkacz of Poland, eighth seed and champion of the past Masters 1000 in Miami.

With the defeat of Medvedev, the two winners of the last US Open are left out of Indian Wells, since the young British Emma Raducanu was dismounted in her debut by the Belarusian Aliaksandra Sasnovich.

– Spectacular comeback –
The world number two landed in Indian Wells with the poster of great favorite after his shocking victory against Djokovic at Flushing Meadows, where he won his long-awaited first Grand Slam title.

You can also read:  Thiem to challenge Djokovic after beating Zverev in Australia

With a streak of eight consecutive victories, Medvedev presented a dominating version at the start of the tournament by ditching American Mackenzie McDonald and Serbian Filip Krajinovic without leaving sets in the way.

Against Dimitrov, Medvedev stepped on the gas early in the game, determined to turn the page quickly on his way to his first Masters 1000 title.

In the second heat, Medvedev went ahead 4-1 and, as he was in sight of victory, his massive serve began to fail him and Dimitrov refused to give up.

The 30-year-old Bulgarian took advantage of Medvedev’s relaxation to chain five games in a row, with three breaks, and take the second set 6-4.

When he wanted to react, Medvedev could no longer raise his game to the level of Dimitrov, who finished the game with an 80% effectiveness on his first serve (by a mediocre 54% from Medvedev) and 25 points winners (by 16).

You can also read:  Nadal-Thiem the clash of experience against youth

The Bulgarian continued the streak and added another three games in a row to the despair of Medvedev who, after several discussions with his team, ended up crashing the racket in rage when he was 4-1 against.

The Russian managed one last break to get closer to 5-3 but Dimitrov’s pulse didn’t shake to fire the big favorite.

«I felt tired in these games. Now that I’m going I can say it, “Medvedev acknowledged.

With the departure of the Russian, the first seeds become the Greek Stefanos Tsitsipas and the German Alexander Zverev, who will face their eighth crosses on Wednesday against the Australian Alex de Minaur and the Frenchman Gael Monfils, respectively. (HN)