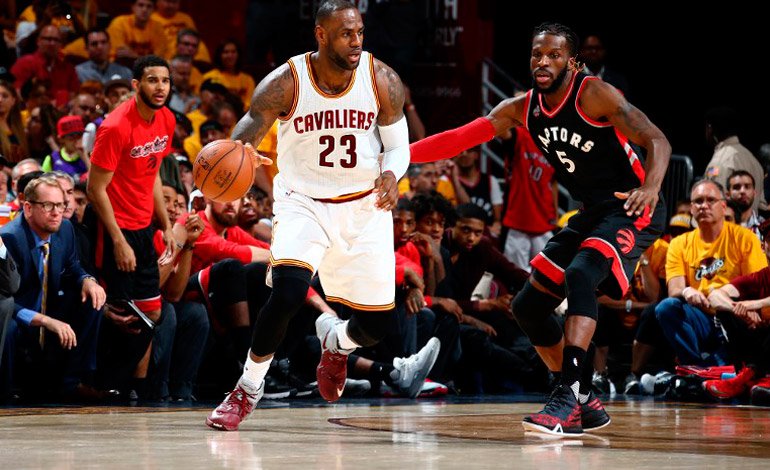 Forward LeBron James was not the top scorer, he left that distinction to power forward Kevin Love, but he was the leader who led the Cleveland Cavaliers to a resounding 116-78 victory over the Toronto Raptors in Game 5 of the Eastern Conference finals that they now dominate 3-2 to the best of seven.
After losing the previous two games played at the Air Canada Center in Toronto, where the sixth game of the series will be played on Friday, the Cavaliers returned to theirs at Quicken Loans Arena in Cleveland and immediately recovered their offensive and defensive power , while the Raptors suffered the biggest humiliation in the playoffs.
Since arriving in the NBA as an expansion team in 1993, the Raptors have never been below 30 points on the scoreboard at halftime in both regular competition and playoff games.
If the first game of the series they lost by 31 points, the largest difference achieved by the Cavaliers in a playoff game, this time they were 38 against them.
James only played 32 minutes, but enough to score 10 of 17 field goals, including 2 of 4 triples, and hit 1 of 3 free throws.
Inside the paint, he captured six defensive rebounds, and showed leadership in the direction of the game by dishing out eight assists, in addition to recovering two balls, losing another two and blocking.
Love, who had not been well in the last two games, rediscovered his best offensive game and contributed 25 points by scoring 8 of 10 field goals, including 3 of 4 triples, and was perfect 6-6 free throws .
Point guard Kyrie Irving reached 23 points and made it possible for the Cavaliers’ attack to always be in control of the pace of the game and the scoreboard.
Richard Jefferson had 11 points and six rebounds, shooting guard DeMar DeRozan with 14 points and point guard Kyle Lowry, 13.
The game was sentenced at the end of the third period with a 100-60 partial, so in the fourth the Cavaliers’ starters no longer played.
In the first half, the Cavaliers already had a 34-point advantage in their favor and never slowed down the pace of the game or the control of actions on the court.
“We knew we had to meet our best basketball team again and that’s what happened,” James said at the end of the game. “We are with the home field advantage in our power and 7-0 in the games we have played in Cleveland.”
If DeRozan and Lowry did not have inspiration in the offensive game, the Congolese center Bismack Biyombo could not shine in the actions under the hoops either and managed only four rebounds, compared to the 40 with which he combined in the two previous games, which were wins of the Raptors.
Center Tristan Thompson with 10 rebounds and nine points won the individual duel against Biyombo and Lithuanian Jonas Valanciunas, who returned to the competition after missing eight consecutive games due to a sprained right ankle in the semifinal series against the Miami Heat.
Valanciunas in the 18 minutes he was on the track contributed nine points.
Veteran Argentine power forward Luis Scola, who started with the Raptors, scored seven points by scoring 3 of 4 field goals, including a triple in two attempts, and did not go to the free throw line.
Scola, who played 15 minutes, also distributed three assists, grabbed a rebound, and recovered a ball, which did not save the Raptors from defeat either.EFE