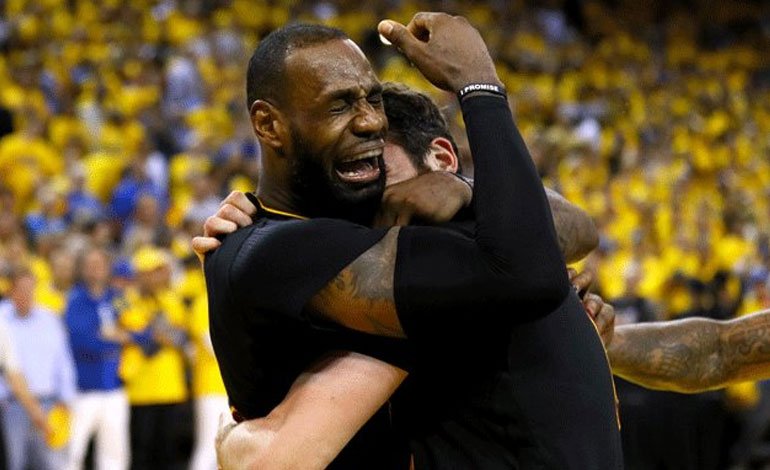 Forward LeBron James already knows which team he will have as a rival in the sixth consecutive NBA Finals he is going to play, a mark only achieved by Bill Russell, and he said that the Cleveland Cavaliers were more prepared than ever to win against the Warriors from Golden State.
After eliminating the undervalued Toronto Raptors in the Eastern Conference finals, James admitted to feeling “blessed” to be able to reach the Finals for the sixth time in a row, including four with the Miami Heat and two with the Cavaliers.
Much more fulfilled to be able to join the figure of a legendary like Russell, the same one who when he saw him play for the first time anticipated that he would go very far in the NBA.
“I’m blessed. The being above us has given me an incredible ability, and I just try to make the most of it,” James said. “That’s my life, giving everything on the field and also helping other teammates achieve important things in their careers, which means a lot to me.”
James admitted that knowing that only Russell and the legendary 1960s Boston Celtics under coach Red Auerbach had achieved the feat of making it to six consecutive NBA Finals was a source of great pride.
But while Russell did it with teammates like Sam Jones, KC Jones, Bob Cousy, Tom Heinsohn, Satch Sanders and Frank Ramsey, most of them Hall of Famers, James has had to put in more individual effort.
However, James, faced with the new challenge of the rematch of the last NBA Finals that they will have starting Thursday against the Warriors, defended the quality that exists within the team and announced that they are much more built and prepared than the last season in the fight for the league title that he has not yet been able to achieve with the Cavaliers.
“I’m not worried about the stakes,” James declared. «I never get involved in that kind of thing, favorites, losers or whatever. This all seems stupid to me.”
James responded that way when reporters informed him that the Las Vegas betting books listed the Warriors, brilliant victors in the Western Conference finals against the Oklahoma City Thunder after rallying from a 1-3 deficit, as 5.5 favorites. to revalidate the title of NBA champions again.
“We’re in a better shape as a team to start the Finals than we were last year,” James said. “It doesn’t matter against the rival that touches us, that is nothing new for us, since the best come to the Finals.”
However, the first big difference between the Warriors and the Thunder is that the defending NBA champions have the best team in the league with a record of 73-9, they know how to play under pressure better than anyone else, they also have advantage of field and since last year’s Finals they have dominated the Cavaliers.
Whereas if they had been dealt the Thunder, the home field advantage would go to the Cavaliers, plus forward Kevin Durant and point guard Russell Westbrook don’t handle pressure as well as Stephen Curry and Klay Thompson do.
“It doesn’t matter,” James reiterated when assessing the rival. “As our coach Tyronn Lue anticipated, what we have done has been to wait for the winner in the West, since we had already achieved the goal of being in the Finals and if we are also going to repeat them against the Warriors, then we take our hats off” .
James, like Lue and his partner Kyrie Irving, the point guard who last year could not complete the Finals due to injury, reiterated that this year not only are they all in top form but they have also made several acquisitions such as power forward Channing Frye, who will be of great help to you.
“The reality is that playing one more year with the same squad, with some acquisitions that have improved us, already make a big difference in our team,” said James. “But the biggest and best of all is that there are no injuries and therefore we have a great opportunity that we are going to make the most of.”
For their part, the Warriors, who await the Cavaliers at their ORACLE Arena field in Okland for the first game of the Finals to be played on Thursday, are also ready to show that they are the best team and the defending NBA champions. EFE

You can also read:  NBA changes All-Star venue due to anti-transgender law