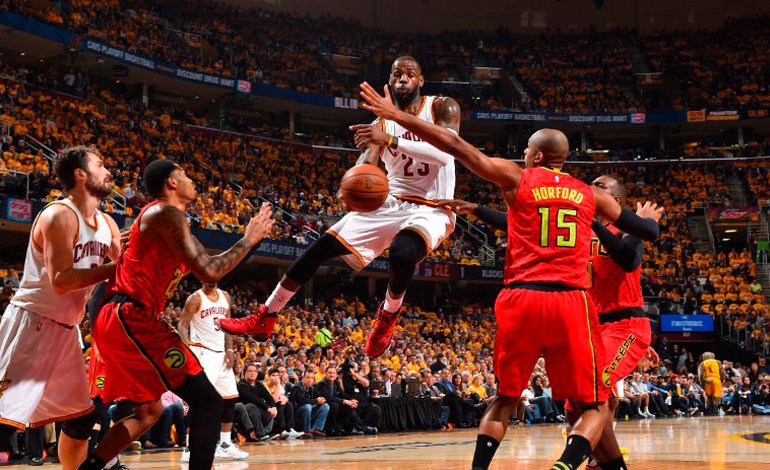 The figure of forward LeBron James shone in a special way on the NBA day as he was the center of attention both for his game, statements and superstar projection that is going to enter the world of cinema.
Most importantly, sportsmanship, James led a balanced attack as the Cleveland Cavaliers fielded five players in double figures and beat the Atlanta Hawks 123-98 in Game 2 of their semifinal series. Eastern Conference playoffs.
The victory left the Cavaliers with a 2-0 best-of-seven lead and Game 3 will be played next Friday at Philips Arena in Atlanta.
Together with James, who contributed 27 points, five assists and four rebounds, shooting guard JR Smith scored 23 points, including seven triples –six in the first half–, of the 25 the team had, a new mark in the history of the competition regular and playoffs by surpassing the 23 that the Orlando Magic (2009) and the Houston Rockets (2013) had achieved.
The Cavaliers scored 18 points in the first half and added another seven in the second against a no-pressure defense from the Hawks, who lost their 10th straight playoff game to the Cavaliers in Cleveland.
James also had four 3-pointers and moved past the legendary Tim Duncan for fifth place on the NBA’s all-time playoff shooter list.
“Tonight was a special night for all of us who have played,” said James. “This league has had great teams, players and shooters, which means that having achieved an all-time mark is truly something very special.”
The Cavaliers star also tied the legendary Robert Parish, the former Boston Celtics center, for 13th place on the list of most games played in the finals (184).
Then, at the end of the game, they asked him about his participation in the film Space Jam 2, by filmmaker Justin Lin, known for his work on several installments of the Fast & Furious action and car saga, who will direct Space Jam 2, and he said no. had nothing to comment on it.
“This issue is not something I should talk about, much less distract my team when we’re in the middle of the finals,” James said. “My only goal and concern is to fight to the maximum so that the team achieves the maximum of victories, I have no other responsibility”.
Before the game, James also honestly and sincerely acknowledged that he would like his former Miami Heat team to be rivals in the Eastern Conference finals.
The Heat have a 1-0 lead in the semifinal series against the Toronto Raptors, whom they won on the road in the opening duel.
“Of course, of course I do,” James said after the Cavaliers’ shooting session ahead of Game 2 against the Hawks. “That’s since I came back. It would be great to play with those guys during the postseason.”
He also admitted that he always wanted to face his friend and former teammate Dwyane Wade in a playoff series.
“During my career, I always wanted to face (Dwyane) Wade in a finals series. We have talked about it even before we became partners in 2010. It is not in my head, but it has crossed my mind throughout my career.
James, the No. 1 draft pick, and Wade, the fifth, entered the league together as rookies in 2003 and teamed up in Miami from 2010 to 2014, making four straight trips to the Finals and winning two championships in that span.
Since returning to Cleveland in the summer of 2014, the Cavaliers are 3-4 losing against the Heat.
The last 122-101 loss, which came in Miami last March, prompted Cavaliers rookie coach Tyronn Lue to sit down with James to discuss his leadership, while the Cleveland star was on hand. most of halftime chatting with Wade even though his team trailed by double-digit numbers. EFE