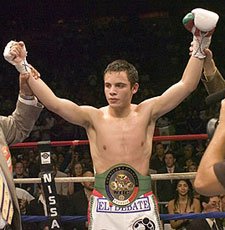 The fight resulted in constant beating, with Chavez’s good handling of his left fist, which hit the body and head of the Irishman, who also managed to respond with impacts to the junior’s face.

You can also read:  Mares surpasses Cuéllar and snatches the featherweight title of the WBA

The challenge had several rounds of exchanges that moved the fans who filled the Alamodome, in support of the son of the three-time world champion in different divisions, Julio César Chávez.

In the last rounds, the Irishman was about to be knocked out, but he withstood the punishment in great physical condition. It was the first fight of the Sinaloan under the tutelage of the fashion trainer, Freddie Roach, manager of the Filipino Manny Pacquiao.

Chávez Carrasco improved his record to 40 wins, with 30 knockouts; while John Duddy added his second setback in exchange for 29 victories, with 19 before the limit.