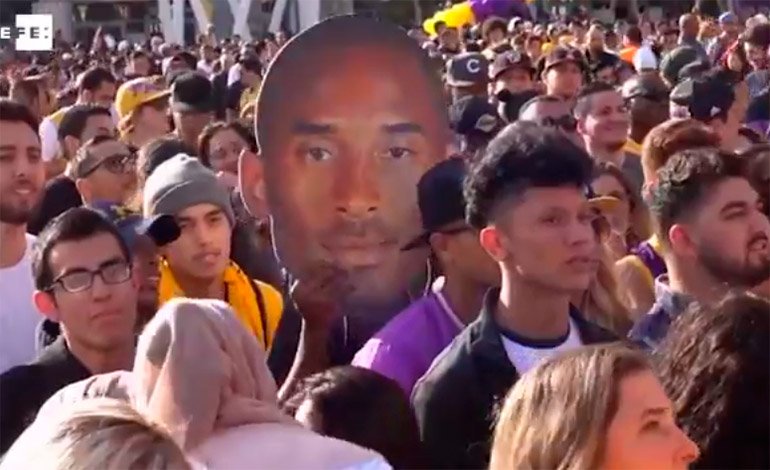 Kobe Bryant’s last game as a professional with the Los Angeles Lakers, today against the Utah Jazz, has generated great interest in the United States and around the world and the number of journalists who will cover it live is estimated at 500.
According to Lakers press officer John Black, it will be some of the biggest coverage in the competition’s history for a regular-season game.
As far as classification is concerned, the only thing at stake is the possibility that the Jazz, if they win and lose the Houston Rockets, get the last ticket for the final playoffs of the Western Conference.
“I don’t remember, in the 26 years I’ve been in office, that there has been a precedent of so many journalists as the one we are going to see in the coverage of the game against the Jazz,” Black said. “The number of requests for Kobe’s farewell game is similar to what you have when the conference finals come around.”
According to Black, a Lakers regular-season game at Staples Center can accommodate up to 250 journalists, which means that half of the 500 who have applied for the credential will have to watch the game on television from the room. stadium press release.
Tim Frank, the official spokesman for the NBA, confirmed that at least 60 foreign journalists had been accredited to cover the game, when there are normally 10 or 12.
Everything related to Bryant’s last game and his retirement has become a big deal. The cheapest ticket is no longer under $800 and if you want to sit in the front row it costs more than $22,500.
Those who want to keep some sort of memento of Bryant’s last game — 37 years old, 20 as an NBA pro, all with the Lakers, and five league titles under his belt — can spend thousands of dollars on merchandise at various price points.
One website is offering special 18-karat gold-encrusted caps that will be worth $39,000 each. Eight were put up for sale and there are only two left, according to that website.
For those who don’t have that purchasing power and want to get a souvenir of the last game that ‘the Black Mamba’ played in his professional career, there are lapel pins with the number 24 sculpted for the modest price of $8.24. EFE