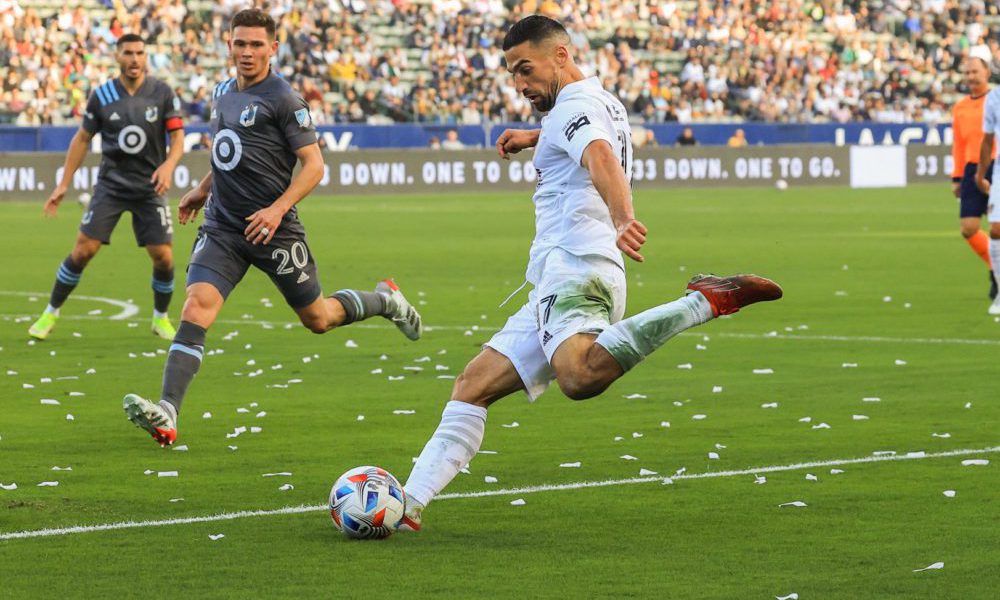 The Los Angeles Galaxy of Mexican Javier ‘Chicharito’ Hernández was eliminated on Sunday in a frantic last day of the North American soccer league (MLS), in which the reigning champion, Columbus Crew, and Los Angeles FC were also out of the playoffs by Carlos Vela.

The Galaxy drew 3-3 at home against Minnesota United with a double from ‘Chicharito’ but was knocked out of the last playoff spot by Real Salt Lake’s 1-0 win over Sporting Kansas City with a goal from Damir Kreilach at minute 90 + 5.

The Los Angeles team finished in eighth position in the Western Conference with 48 points, the same as Real Salt Lake, which took seventh place.

In a game in which they were always in tow, ‘Chicharito’ was in charge of the second and third goals for the Galaxy with two shots within the home-mark area in the 51st and 75th minutes. Sebastian Lletget had previously scored in the 45 + 1 .

With this double, ‘Chicharito’ added 17 goals in the MLS regular phase, to two of the top gunners: the Argentine Valentín Castellanos (New York City FC) and the Norwegian Ola Kamara (DC United).

Minnesota’s goals, which ended in fifth place, were the work of Frenchman Adrien Hunou in minute 22, Finn Robin Lod in 34 and Mexican-American Julián Araujo on his own goal in 62.

In the last few minutes of heart attack, the Galaxy were saved first by an error by the Argentine of United Franco Fragapane, who crashed a penalty against the post in the 89th minute.

But when the Angelenos fans practically celebrated the pass, the Croatian Kreilach scored the goal of the victory for Real Salt Lake against Sporting Kansas City that left the Galaxy out.

His neighbor Los Angeles FC (LAFC) also did not get a ticket to the postseason when he was beaten 5-2 on the Colorado Rapids court.

The Colombian Cristian Arango, in the 55th minute, and the Uruguayan Brian Rodríguez, in the 71st, scored the goals of the LAFC, which left their star Carlos Vela on the bench, limping from the physical problems that kept him out for a long period .

You can also read:  Juárez defeats champion Cruz Azul and leaves the basement of Mexican soccer

In the Eastern Conference, the 2020 MLS Cup champions Columbus Crew fell out of the playoffs despite a 2-0 win over the Chicago Fire.

Argentine midfielder Lucas Zelarayán scored a brilliant target in minute 31 and Spaniard Miguel Berry another in minute 58 for Columbus, who finished in ninth place with 47 points.

For his part, Venezuelan Josef Martínez scored a spectacular goal to give United a 2-1 win at FC Cincinnati, with which he guaranteed a playoff spot as fifth seed.

FC Cincinnati took the lead through Zico Balley in the 21st minute but Miles Robinson equalized for Atlanta in the 70th.

In 79, Josef Martínez chased a high ball into the FC Cincinnati area and landed a powerful volley on the swing that surprised the keeper and culminated Atlanta’s comeback.

The top of the Venezuelan team, elected in 2018 as the Most Valuable Player (MVP) of the MLS, added his twelfth goal of the season, after a 2020 practically blank due to a serious injury.

You can also read:  The teams that would be heads of the group in the Qatar World Cup 2022

Orlando City, with a 2-0 win at Montreal, and the New York Red Bulls, which drew 1-1 against Nashville SC, finished in sixth and seventh places, completing the franchises ranked in the East.

Already eliminated before the so-called ‘Decision Day’, Argentine Gonzalo Higuaín’s Inter Miami said goodbye to the season by beating New England Revolution 1-0 away with a goal from Frenchman Blaise Matuidi in the 58th minute. (AFP)