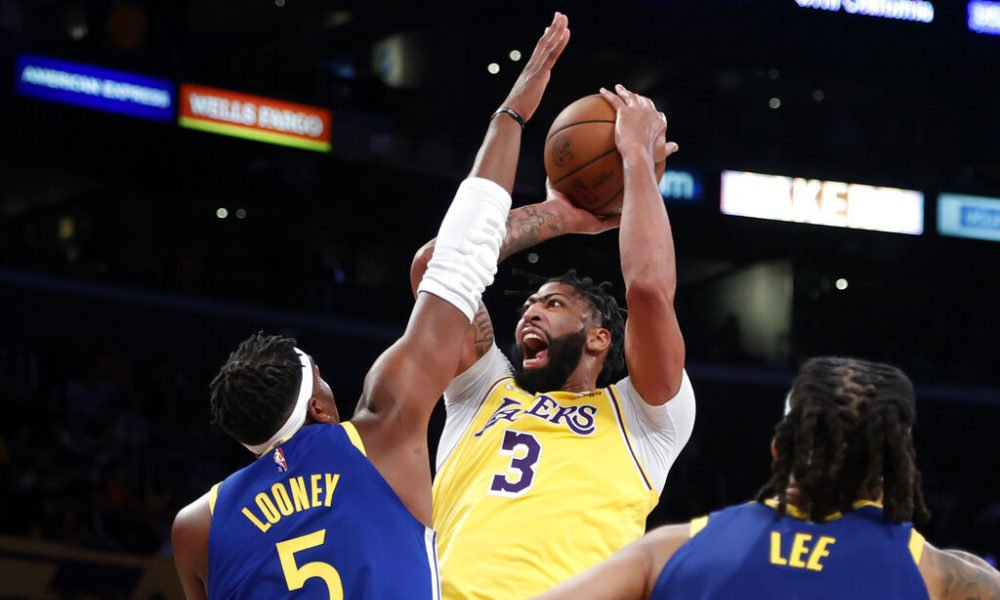 Without LeBron James, the Los Angeles Lakers won a fierce overtime game Tuesday against the San Antonio Spurs as the Golden State Warriors went undefeated with four wins for the first time since their record 2015-2016 season.

In San Antonio, the Lakers beat the Spurs 125-121 supported by their two available stars, Russell Westbrook and Anthony Davis, who suffered a knee problem in the final stretch of the crash.

Davis added 35 points, 17 rebounds and 4 blocks and Westbrook another 33 points, 10 rebounds and 8 assists to compensate for the loss of LeBron James, reserved for his right ankle discomfort.

Apart from Davis and Westbrook, only the young Malik Monk surpassed ten points for the Lakers with 17.

The Spurs were led by point guard Dejounte Murray, who had a triple-double with 21 points, 12 rebounds and 15 assists.

Austrian center Jakob Poeltl was also impressive with 27 points and 14 rebounds but missed two key free throws in the last minute to tie the scoreboard.

You can also read:  The Raptors show James that they are champions

On the second pitch, Davis was injured colliding with two San Antonio players while fighting the rebound. The pivot spent a few minutes on the ground hurting his right knee but was able to continue.

In the last minute, Davis himself failed to complete an alley-oop from Westbrook and then Murray missed a shot from mid-range.

The game went into overtime, in which Westbrook and Davis combined to score 10 points amid a string of home team misses.

The Lakers, who add two wins and two losses, play again Wednesday at the Thunder court.

The Golden State Warriors defeated the young Oklahoma City Thunder 106-98 and stood with a record of four wins and no losses for the first time since the 2015-2016 season.

In that season, in which they won their first 24 games, the Warriors of Stephen Curry, Draymond Green and Klay Thompson broke the record for victories in the regular phase (73-9) but lost in the Finals against LeBron James’ Cleveland Cavaliers.

You can also read:  Lung disease put an end to the career of an NBA star

This Tuesday, the Warriors came into halftime with an 11-point deficit but rallied with a 33-17 third-quarter run to beat the Thunder, last in the Western Conference.

Curry was not very successful in the shot (6/14) but finished with 23 points and 6 rebounds while Draymond Green added 8 points, 9 rebounds and 8 assists.

In New York, the Knicks beat Joel Embiid’s Philadelphia 76ers 112-99, who played with a sore right knee and had 14 points and 6 rebounds.

The New York team consolidated its good start to the season, with three victories and one loss, driven by its figure Julius Randle, who signed his third double-double in a row with 16 points and 11 rebounds.

Point guard Kemba Walker had his best performance in his new uniform with 19 points and 5 assists.

You can also read:  Special gift from Atlanta to Pope Francis

The Sixers fell 20 points at halftime weighed down by one of the worst first halves of Embiid, who missed all five shots from the field and added 9 points from the personnel line.

Tobias Harris held the Sixers with 23 points, 9 rebounds and 9 assists that weren’t enough to avoid the second loss in four games of the season.

The Sixers continue to suffer the absence of Australian point guard Ben Simmons, who remains out of the team dynamic after requesting a transfer to another franchise.

In Dallas, the Mavericks defeated the Houston Rockets 116-106 with 26 points, 14 rebounds and 7 assists from their star Luka Doncic.

Results of Tuesday’s day in the NBA: