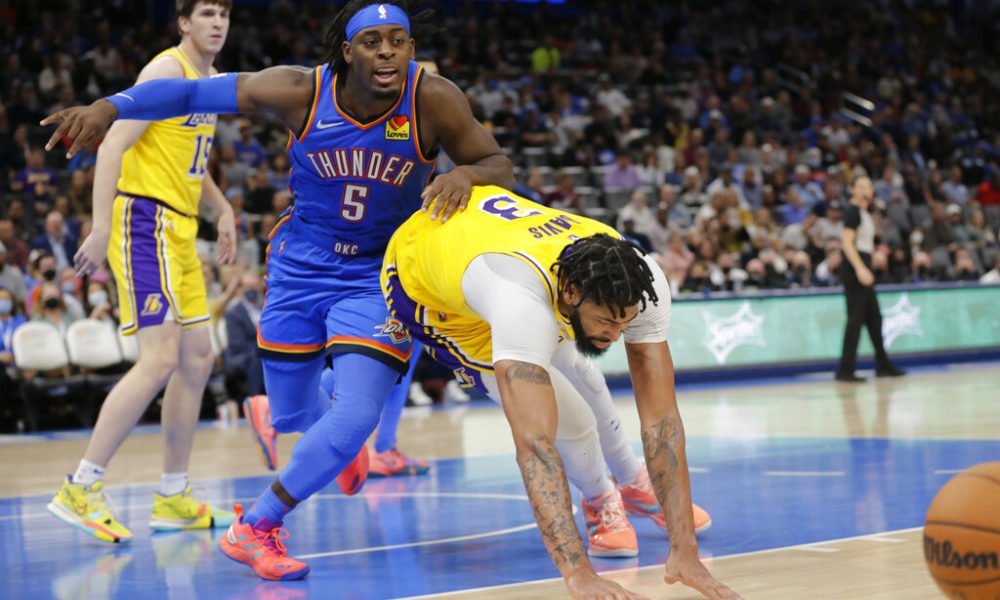 With the loss of LeBron James, the Los Angeles Lakers lost a 26-point lead on Wednesday to fall to the young Oklahoma City Thunder, a team that did not know victory this NBA season.

In a day full of surprises, the reigning champions, the Milwaukee Bucks, and another of the great favorites, the Brooklyn Nets, also stumbled before the Minnesota Timberwolves and the Miami Heat, respectively.

The biggest debacle was that of the Lakers on the Thunder court by 123-115 despite 30 points from Anthony Davis and triple double from Russell Westbrook: 20 points, 14 rebounds and 13 assists.

The Los Angeles franchise couldn’t count on LeBron James because of his ankle problems, but it did put Davis on track despite the fact that he had injured a knee the night before in an overtime win over the San Antonio Spurs.

Davis started the game strong, adding 12 points in the first quarter, in which the Lakers seemed to put the victory on track with a 41-19 run.

The Los Angeles team had a 26-point advantage but in the third quarter they collapsed against the Thunder who had not released their winning record in the first four games.

You can also read:  Lakers win and take advantage in the series against Portland

The Oklahoma City team, the most inexperienced in the league, rode their best player, point guard Shai Gilgeous-Alexander, who finished with 27 points and spectacular baskets as a triple in the last second of the third quarter against Westbrook. .

That triple put the Thunder ahead 97-95 heading into the final period, which led to a bizarre finish.

With only ten seconds to play, Malik Monk and Carmelo Anthony missed two triples that missed the rim and would have placed the tie.

Frustration in the Lakers led to Westbrook being sent off for facing Darius Bazley for celebrating a dunk with the game already sentenced for Oklahoma.

“It’s a disappointing loss,” admitted manager Frank Vogel. “We have taken our foot off the gas. After that big lead in the first quarter, it usually holds up, but we weren’t able to do it. ”

“Our concentration, intensity and effort in the defensive aspect declined, but lesson learned,” he stressed. “We can’t take our foot off the gas against anyone.”

You can also read:  Players and NBA approve 22-team format to resume season

The Lakers add two wins and three losses at a start to the season in which their commitment to an ultra-veteran squad is leaving many doubts.

The Brooklyn defense could not stop pivot Bam Adebayo in the paint, who added 24 points and 9 rebounds and was well seconded by Jimmy Butler, who finished with 17 and 14.

Kevin Durant again led Brooklyn offensively with 25 points and 11 rebounds while James Harden continued his uneven start to the season and finished with just 14 points, 7 rebounds and 7 assists.

The Nets are still unable to count on the other member of their ‘Big 3’, Kyrie Irving, removed from the team for his refusal to be vaccinated against covid-19.

In Milwaukee, the Bucks suffered their second loss to the Minnesota Timberwolves 113-108 despite Giannis Antetokounmpo’s 40 points and 16 rebounds.

Bucks’ other star, Khris Middleton, stayed at 16 points with 1/8 on 3s and only one other teammate, Grayson Allen, surpassed ten points with 13.

Milwaukee was unable to contain the trio of young Timberwolves figures, who combined to score 79 points: D’Angelo Russell (29), Karl-Anthony Towns (25) and Anthony Edwards (25).

To complete the day, the Phoenix Suns, last season’s runners-up, were also beaten on their court by the Sacramento Kings 110-107.

For the Suns, veteran Chris Paul was unusually off the mark with 6 points (1/10 shooting from the field) and 8 assists while Devin Booker scored 31 points and center DeAndre Ayton had 21 points and 21 rebounds.

Results of the day of Wednesday in the NBA: