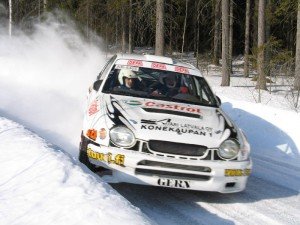 “It’s something I’ve been dreaming of since I was a kid. The fans are fantastic in Finland, I have won at home,” Latvala told the world competition website (www.wrc.com). “It’s incredible, I feel a great relief, it’s a fantastic rally. Our team has worked very hard and this victory is for them.”

Norwegian Petter Solberg, who had started the day 9.1 seconds behind Latvala in second position, finished fourth in his Citroën. French driver Loeb’s path to his seventh world title remains clear, as he remains leader of the standings with 166 points, 48 ​​ahead of Ogier. Latvala is in third place with 105 points.

You can also read:  Rosberg triumphs in Brazil and puts pressure on Hamilton

“Third position is not what I would have preferred, but I did not come here especially for the victory,” Loeb said on the website. “I know it’s not my (favorite) rally, because it’s difficult for me. Third place is not so bad,” he added.

Finn Mikko Hirvonen, Latvala’s teammate and last year’s winner of the competition, set the pace of the event before going off the track in spectacular fashion on Friday during stage four, after losing control of his vehicle at 140 kilometers per hour. Hirvonen and his co-driver, Jarmo Lehtinen, were not injured in the accident.