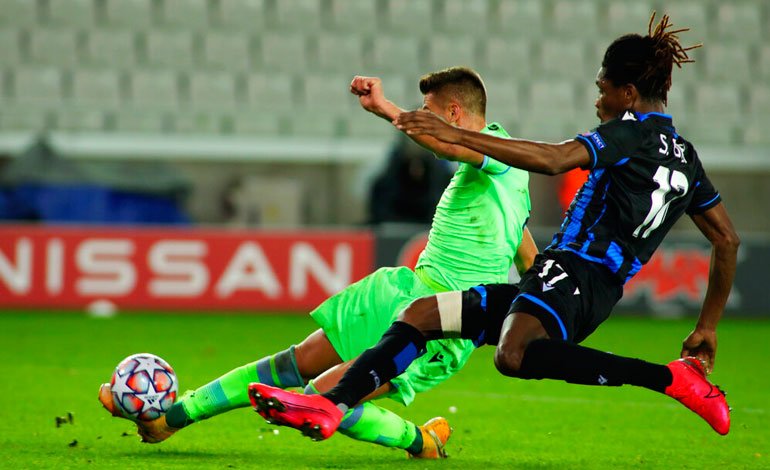 A goal by Argentine Joaquín Correa in the first half allowed Lazio to achieve a creditable draw against Bruges (1-1), since covid-19 forced coach Simone Inzaghi to leave many of his usual players in Italy.

The tie allows the Italians to share the leadership of their group with four points along with Bruges, who deserved more in the second 45 minutes but did not find a goal.

Lazio was planted on the pitch with an unknown lineup. Only six starters from last week’s game against Borussia Dortmund were able to repeat in the starting eleven, as the likes of Luis Alberto, Ciro Immobile, Andreas Pereira, and Lucas Leiva had to stay in Italy.

Joaquín Correa was decisive, especially at the beginning of the match, and the Spanish goalkeeper Pepe Reina shone in the second half, when his team needed him most, with a couple of saves that could well have meant victory for the Belgians.

Correa tried his luck in the fourth minute with a loose shot that Mignolet saved without a problem, but he did not forgive in the second he had. In a quick attack by the Italians, Adam Marusic gave him a horizontal pass on the edge of the area. The former Sevilla player took Simon Deli without touching the ball and beat the Brugge goalkeeper with a splendid left-footed shot.

You can also read:  Costa Rica will play without an audience against El Salvador

Although Brugge controlled possession in the early stages, it was Lazio who created the most danger through counterattacks. Former Spanish player Felipe Caicedo was close to scoring the second with a header.

The Belgian defense showed signs of being more orderly after 20 minutes, the midfield started to work and the chances came. Striker Charles de Ketelaere was unable to take advantage of a resounding mistake by Lazio’s defense in his own box and, only against Reina, did he send the ball wide.

Lazio’s cons came mainly from the right flank, and in one of them Caicedo and Akpa-Akrpo got in the way when heading in from the penalty spot.

Brujas advanced lines as the first half progressed and got closer little by little until, on the edge of the break, the Spaniard Patric made an unnecessary grab from a corner. Referee Anthony Taylor let the play continue and, when the ball went wide, he only needed a VAR replay to signal the penalty. Vanaken, from eleven meters, deceived Reina with a shot from the left and leveled the score.

You can also read:  Cristiano: "I achieved the goal I set for myself since my arrival in Italy"

Inzhagi seemed to punish Patric at half-time when he decided to substitute him for Andreas Pereira. Shortly after the restart, Emmanuel Bonaventure was planted in front of the Spanish goalkeeper, but the striker was left very heeled to the right and the Madrid player narrowed it enough to send it to a corner with his leg. In the ensuing action, Mats Rits made a powerful header that was again parried by the goalkeeper with a quick dive.

The Belgians continued to attack, but neither Rits nor Eduard Sobol found a goal. Lazio, for their part, tried their luck from set pieces and, in one of those, Vedat Muriqi headed too high.

It was a miracle that neither team scored in the last fifteen minutes. In minute 77 it was goalkeeper Mignolet’s turn to show off, when he cleared a strong shot from Milinkovic-Savic for a corner.

An oversight by the Italian defense almost cost them the match right after. Reina was unable to save a hard shot and Ruud Vormer sent the rebound too high. De Ketelaere then made a good cut in the area, but his shot was blocked by the defence. Shortly after, in the other area, Pereira received in the area alone and, instead of shooting, he entertained himself with the ball, letting a defender from the Belgian team block his shot.

You can also read:  Pelé assures that he "recovers well" after being operated on for a tumor in the colon

Bruges harassed in the discount without success. With this result, the classification of group F tightens. Bruges and Lazio share the lead with four points, Borussia Dortmund adds three and Zenit is left with zero.

Referee: England’s Anthony Taylor showed a yellow card to Diatta, Hoedt, Bonaventure and Rits for Club Brugge, and to Fares, Patric, Akpa-Akpro and Czyz for Lazio.

Incidents: match corresponding to the second day of group F of the Champions League, played at the Jan Breydelstadion in Bruges without an audience in the stands. EFE (hn).