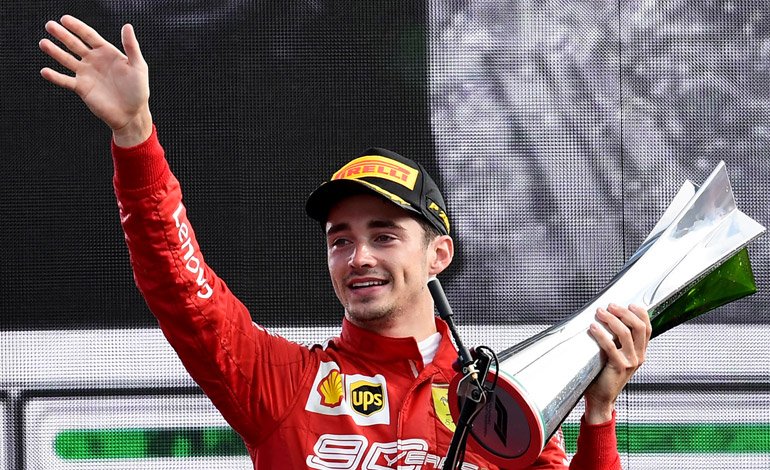 Charles Leclerc ended Ferrari’s nine-year wait for a home win by withstanding the onslaught of the Mercedes duo and taking home the Italian Grand Prix, adding in the process his second successive Formula One triumph.

“This really means a lot to me,” Leclerc said in Italian speaking from the iconic Monza podium, in front of a red sea of ​​Ferrari fans chanting his name and waving flags.

The 21-year-old Monegasque, who started from pole, was applauded as he crossed the finish line eight-tenths of a second ahead of Finn Valtteri Bottas and 35.1 seconds ahead of Briton Lewis Hamilton, current championship leader.

«In the last two laps I started to believe that victory was possible. I got all my emotions out on the radio, I don’t think anyone has understood what I said, “Leclerc said with a laugh.

You can also read:  Hulkenberg surprises with the "pole"; Alonso was fifth

The last time Ferrari won at Monza was in 2010 through Spaniard Fernando Alonso.

Hamilton put pressure on Leclerc, especially after entering the pits at the end of lap 19 and returning to the track on medium tires.

Leclerc also pitted a lap later and while he managed to get back in front of Hamilton, he was running on hard tires.

Shortly after, Hamilton almost passed Leclerc, but the Monaco driver resisted with a maneuver that sent the Mercedes to the grass area. Leclerc received a black and white warning flag, but was not penalized.

You can also read:  FIA validates the registration of the Marussia Manor team

Another defensive maneuver by Leclerc later in the race had the Briton radio to his team: “You are driving dangerously here.”

However, Hamilton’s chance of salvaging a victory disappeared with 11 laps remaining, when he made a mistake in turn one, ending up on the escape route and allowing Bottas to take second position.

Following that incident, Hamilton gave up going after Leclerc and instead opted to enter the pits to change tires in order to record the fastest lap of the race and take the bonus points.

“Charles did a great job,” acknowledged Hamilton. “He resisted a lot of pressure from Valtteri and me.

“I did my best, but staying so close for so many laps wears down the tires. Today was not our day, “added the Briton.

You can also read:  Ferrari throws in the towel and already thinks about 2015

Bottas focused on attacking Leclerc and, with newer tires, was able to close the gap. However, the Finn surrendered two laps from the finish line to open the way to an emotional victory for Leclerc, who just last weekend had scored his maiden Formula One victory, at the Belgian Grand Prix.

Leclerc’s teammate, German Sebastian Vettel, had a miserable performance, receiving a 10-second penalty for dangerously returning to the track after turning at the Ascari chicane and nearly causing an accident with Lance Stroll.

The German and four-time champion came in 13th place.

Hamilton’s lead in the overall standings narrowed two points, but he is still 63 points ahead of Bottas with seven runs left in the season. ap