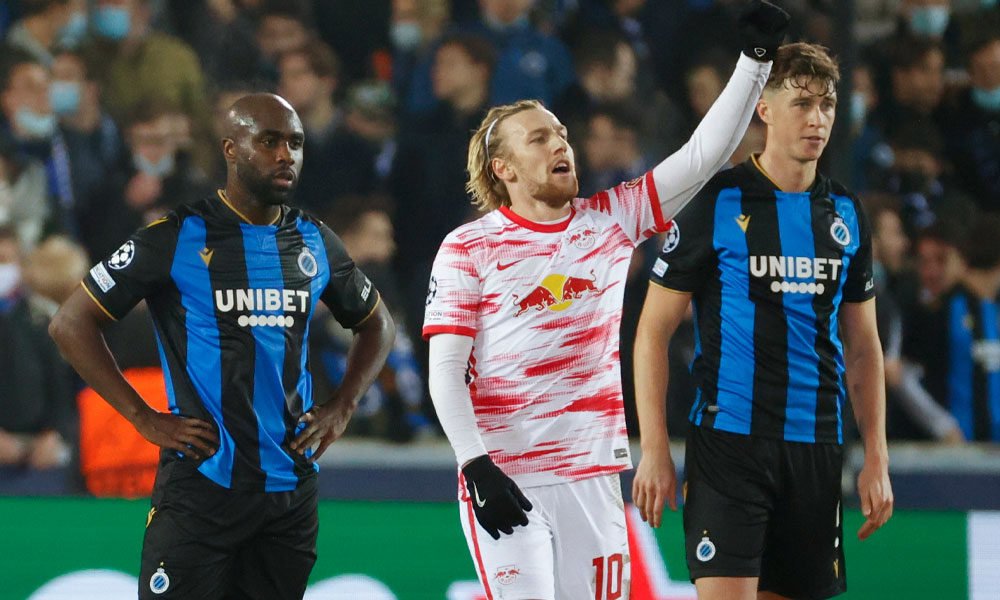 In a nightmare night, Bruges let themselves be beaten at home by Leizpig (0-5), without offering the slightest resistance against the Germans in a match in which the Belgians were looking for a draw that would guarantee them access to the Europa League. or a victory that will let them continue dreaming of the “Champions”.

But those of Philippe Clement were overwhelmed by Leipzig -which also arrived in Belgium burdened by the covid- so that Manchester City will go to the second round in the Champions League as group leader and Paris Saint-Germain (PSG) will do so as second, while Bruges and Lepzig will still play third place on the last day, which means a ticket to the Europa League.

Leizpig took sixteen minutes to deactivate the Belgians, who needed the Frenchman Christopher Nkunku to get the first on the scoreboard (12) after a huge defensive error by the Belgian centrals and the Swede Emil Forsberg to convert a penalty (m. 16) clumsily committed by the Ghanaian from Bruges Kamal Sowah when he failed a punt.

You can also read:  Ancelotti: "I don't think the approach was wrong"

The game already seemed like an insurmountable wall for the Belgians, and then, when Bruges was just beginning to recover from the “shock”, the tip came from the Portuguese André Silva (m.26), who took advantage of a pass from the left of the Spanish Angeliño to raise the 3-0 to the marker.

Still in the first half, with Brujas without having been able to assimilate that in less than half an hour the season had been significantly complicated, a fourth dart arrived that blew out any silver lining in Flemish lands.

Without great difficulties, Forseberg found space for a long shot that became the fourth German goal of the night and the second on his own account (min.46 +).

You can also read:  Kroos, Modric, Varane and Bale already train at Madrid

«We are going to play to win. When a match is planned to tie, one thinks only of defending. Without the intention of scoring against a team with such quality, there are many chances of losing, “the Belgian coach had said on the eve of the match.

In the first 45 minutes his players shot once between the three sticks, for seven shots on goal from Leipzig and at half-time, Clement made two changes to try to make his team react: he took out a striker to put in another midfielder (Rits by Dots ) and moved the defense (Ricca for N’Soki).

The Belgians showed a bit more claw in the second half, with a certain role from Charles De Ketelaere.

But the game seemed cursed for Bruges and in a second little showy section, on the edge of the final whistle, Nkunku, who had opened the scoring, closed the win with a fifth goal for Leipgiz, who had traveled to quarantines derived from the coronavirus Belgium without its coach, Jesse Marsch, nor its captain and goalkeeper, Peter Gulacsi.

You can also read:  Canada with a luxury cast at the start of the Qatar 2022 road against Honduras

Incidents: Match corresponding to the fifth day of group A of the Champions League played at the Jan Breydel Stadium before some 30,000 spectators. EFE