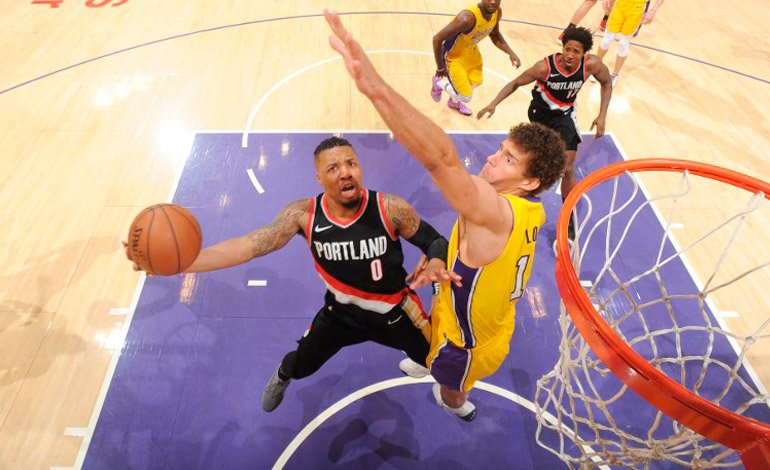 Point guard Damian Lillard claimed his status as a star and winning leader of the Portland Trail Blazers, in a performance that served as a warning to the favorites of the Western Conference, just as the Indiana Pacers did in the Eastern Conference by achieving both paths. victories during the last day of the NBA.
Lillard contributed 39 points, including 19 in the fourth period, and led the comeback of the Trail Blazers, who defeated the Los Angeles Lakers at home (103-108), breaking a five-game winning streak.
The Trail Blazers starting point guard, who made 12 of 25 shots from the field, including 6 of 11 from outside the perimeter, also had six assists and five rebounds.
The Trail Blazers (38-26), who won the fifteenth consecutive game in the duels with the Lakers, consolidated their position as leader of the Northwest Division with a streak of seven consecutive wins, the second best in the Western Conference, only surpassed by all 15 of the Houston Rockets.
For their part, the Lakers also once again had power forward Julius Randle as the leader, with 21 points and nine rebounds, although this time it was not enough to avoid defeat.
Croatian guard Bojan Bogdanovic added 29 points, which allowed him to tie his best scoring record so far this season, and led the Indiana Pacers to a 92-89 victory over the Milwaukee Bucks, the third in a row.
Guard Victor Oladipo also had 14 points, five rebounds and five assists, but committed 10 turnovers, his worst mark so far this season, while power forward Taddeus Young added 10 points that also helped the victory of the Pacers (37-27), who remain fourth in the Eastern Conference.
Greek forward Giannis Antetokounmp finished as the most complete player on the Milwaukee team with a double-double of 18 points, 12 rebounds, two assists and two ball recoveries, but he did not avoid the fifth defeat in the last six games played by the Bucks (34-30) who are now eighth in the East.
Guard Jaylen Brown regained his best scoring inspiration and with 21 points, he led the winning attack of the Boston Celtics who, despite the absence of star point guard Kyrie Irving, easily beat the Chicago Bulls 89-105 away from home.
Irving, who played last Saturday against the Houston Rockets, again felt discomfort in his left knee and Celtics coach Brad Stevens decided to give him rest.
Along with Brown, rookie forward Jayson Tatum had 14 points, Dominican center Al Horford and point guard Terry Rozier, who started at Irving’s position, scored 13 points each.
The victory left the Celtics with a 45-20 record, the second best in the Atlantic Division and the Eastern Conference, where the Toronto Raptors, who had a bye, are the leaders.
The combination of forward LeBron James and power forward Larry Nance Jr. added 53 points that allowed the Cleveland Cavaliers to comfortably beat the Detroit Pistons 112-90 and end a two-game losing streak.
James led the Cavaliers attack by scoring 31 points in the 29 minutes he was on the Quicken Loans Arena court. He also made 11 of 17 shots from the field, including 5 of 7 triples, grabbed seven rebounds and dished out seven assists.
Nance Jr., who started for the first time since he came to the Cavaliers from the Los Angeles Lakers, had a double-double of 22 points and 15 rebounds, including 11 defenders – his best professional records – and recovered two. balls.
Nance Jr. wore the jersey with the number 22, the same one that his father wore when he was a Cavaliers player.
Veteran French point guard Tony Parker recovered his best scoring version and with 23 points was the leader who led the Spurs to a 100-98 victory over the evicted Memphis Grizzlies, who lost the fourteenth consecutive game, despite another double- double for Spanish center Marc Gasol (24 points and 10 rebounds).
Center Hassan Whiteside with a double-double of 24 points and 14 rebounds led the balanced and winning attack of the Miami Heat that beat the Phoenix Suns 125-103.
Along with Whiteside, who had his best score since January 29 when making 10 of 13 shots from the field, the Slovenian point guard Goran Dragic contributed 17 points and also stood out in the victory of the Heat (34-30), the second consecutive , fourth in the last five games played, which allows them to place seventh in the Eastern Conference.
The French center Rudy Gobert contributed a double-double of 21 points and 17 rebounds that left him in front of the Utah Jazz who beat the Orlando Magic 94-80 at home.
Gobert scored 9 of 10 shots from the field and led the balanced attack of the Jazz (34-30), who achieved the third consecutive victory and that allows them to continue in the fight for eighth place in the Western Conference, which are one game and a half. EFE.